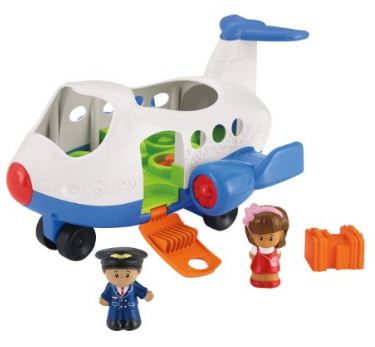 I have always thought that a child’s first birthday party is really more for the parents, family, and friends to celebrate than it is for the child, but I am pretty sure kids love cake and toys no matter what age they are.

One of my son’s favorite toys from his 1st birthday party was the Fisher-Price Little People Toy Airplane set he got.

It was a toy he could enjoy playing with even at his young age and it has remained popular ever since. This review should help you decide if this toy would be a good fit for your child, niece, or nephew.

***EDITORS NOTE FOR 2022*** The version that is pictured to the right and the one I bought for my son is no longer being produced. But don’t worry – the Little People Toy Airplane that they currently use is fantastic and has been updated to bring even more fun into a household!

This version of the Fisher-Price Little People Lil Movers Airplane was released in December of 2013 and is recommended for children ages one to four. I agree with that age recommendation. It is perfect for 1-year-olds to push when crawling, and older kids can pick it up and pretend they are flying with it.

Besides the airplane, this toy comes with some luggage, a pilot, and a stewardess. The toys are large enough that they are not a choking hazard. The plane itself is about a foot long and weighs a couple of pounds.

The toy’s wheels work really well, my son loves racing it up and down the hallway on the ground. It really has some get up and go. It is also very durable, it can be wrecked and crashed into numerous things without seeing any damage.

My son’s biggest difficulty is getting the orange door to open up. It is a tight fit and takes some major effort to open and close. That is a minor frustration, but the top is open so it’s not like he can’t load up the airplane.

Every time you push the plane it is going to sing the same theme song. There is an on and off button on the bottom, but it won’t take long for your toddler to figure out how to turn it on or off.

Overall this is a very fun toy. My son loves to load the plane up with all his other toys and drive it around. He enjoys the music for a little while, and he really loves crashing his plane into his block forts or his dump truck. The bigger the wreck, the more he seems to enjoy it.

This is about as safe of a toy as you can buy. The pieces are not choking hazards, and the airplane is so durable that there really isn’t any risk of small parts breaking off or sharp edges being created if a piece broke off.

The only real danger here is that the toy is pretty heavy so your child might drive the vehicle into your feet or toss the toy at a sibling. When a toddler gets a little older throwing the plane to simulate a plane crash seems like a good idea right?

But those are common dangers associated with almost any toddler toy. Because of that, this toy only earns a 2 out of 10 on the danger scale. Any child a year or older should have no problem safely playing with this toy.

When other parents ask me if this toy can get annoying for parents, the answer is a major yes. The big reason behind that annoyance is the main theme song the toy plays, and the fact it plays it every time the wheels move.

First, I don’t see the need for 8 dings before we get into the lyrics. The multiple languages are a nice touch, but my 2 year old has a hard time speaking English. There is also no volume control, so it plays and plays and plays again. It drives my wife nuts.

There are also 3 buttons in the plane itself that can be pushed. One just says “ding welcome aboard” one makes an engine noise, and the other says “fasten your seatbelts”. There is a fourth spot for an additional passenger, but that one doesn’t make any noise. I call that a nice change of pace.

Because that song plays over and over, and it’s annoying…it will eventually drive you crazy. This scores an 8 out of 10 on the parent annoyance scale.

This makes sense since our son got it for his first birthday and his uncle said he went up and down the toy aisles pressing all the buttons, and he picked the toy that annoyed him the most.

There are times where you could possibly see a couple of different versions of the Little People Toy Airplane on shopping sites like Amazon. That is because Little People does a great job of updating their toys – which is part of the reason why the version we currently own isn’t readily available right now.

At one point, there were a couple of different pink Little People Toy Airplane options available. I have not seen them recently – but currently the main model is a very sharp looking blue toy airplane! There is also the Little Movers Airplane which is the one pictured above with the handle.

2021 Update – There is a newer version of the Little People Airplane now on the market! This version includes a Pilot Kirk Figure, a Passenger Ema figure, and of course the good-looking blue airplane that you need to give those figures a ride!

It also includes a big button that you can push for sounds – which I can’t verify are as annoying as the original version we reviewed – but I don’t imagine they can be that much fun for parents. I guess it all depends on if they got rid of that terrible song or not.

I still like the look of the new Little People Toy Airplane and imagine your child is still going to have a lot of fun playing with it!

This really is a very durable and fun toy for children. Because of that, we give it a silver star rating.

We do recommend this toy for purchase. And if you are in the hunt for a fun toy for your niece or nephews that will annoy the parents, this is a winner!

Hopefully between all these good options you are going to find a toy that your child loves – and like always – thanks for reading!