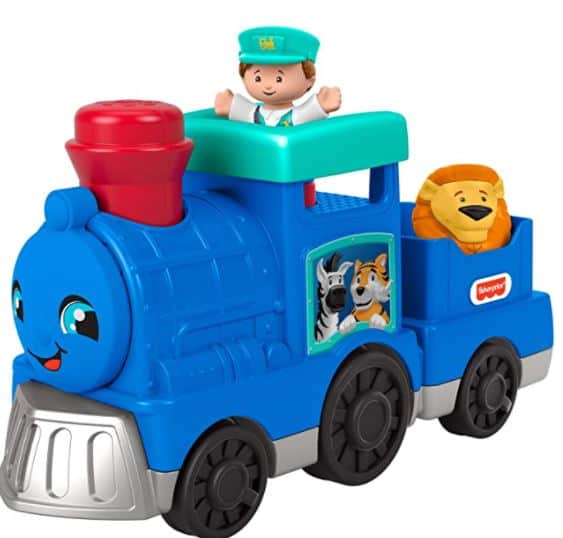 I think one of the more enjoyable experiences parents have is taking their kids down the toy aisle of a store and letting them pick a toy that they really want (as long as your child isn’t screaming).

When my wife and I were expecting our second child, we let our son pick something out so he wouldn’t feel left out. He decided on the Little People’s Zoo Train and has been very happy with his decision ever since.

As parents, we have had nothing but good experiences with this toy (which I think most people experience when they purchase Little People Toys from Fisher Price)! To learn more about our experiences, and our son’s experiences, please read on!

***EDITORS NOTE for 2021/2022*** The design of the Little People Zoo Train itself is exactly the same as the one I described below, however, the animals and conductor figure have gone through a slight update. I think they look better now than they did when we bought it!

This is a really fun orange, red, blue, and yellow toy train that has a manufacturer’s recommended age of 1-5 years. The train is connected to an open car/trailer that allows you to place animals or other toys into the back and drive them around.

Even young children will enjoy pushing the train all over your home. It moves really well on tile flooring and even carpet, so my son likes to race it against his other cars. Sometimes the animals come flying out the back, but no real damage seems to happen to them. The train itself is also really durable, it has been involved in many train wrecks and it doesn’t have a single scratch on it!

The train has a smoke stack that can be pushed to make different train noises. The train car can also be pushed down to sing different songs, and it makes different animal noises when it moves. Overall, it is a great toy that has brought a lot of fun into our home, and will make a great addition in yours!

This is another Little People toy that scores really well on the potential danger scale. There are no small or potentially sharp parts, and it is made really well preventing any potential breakage.

What could potentially happen that could cause problems? Maybe your child throws a temper tantrum and tosses the animals, conductor, or train at someone. Luckily trains aren’t supposed to fly, so as parents we can correct that behavior quickly and efficiently.

The one surprising situation that I didn’t see coming was my son trying to stand on the trailer part of the train, and use it like a roller skate. As you can imagine, the toy really isn’t made for that and it’s really hard to keep your balance. The good news is, he didn’t crash into anything so no damage was done. He also hasn’t attempted that technique again since the fall.

We give this toy a 3 out of 10 on our scale. Something very strange would have to happen for any injuries to occur with this toy aside from the potential situations listed above. Maybe an adult slipping on it in the middle of the night and falling down the steps? I saw that on a cartoon once.

For a toy that makes a lot of noise, it actually scores relatively low on the adult annoyance scale. A big reason for that is it makes a variety of sounds – which includes one main theme song and multiple animal noises.

Don’t tell my wife this, but the party song is actually a little catchy going something like this: “All aboard. Choo Choo! Climb aboard the zoo train. We say hello to all the animals. Hear them growl and hear them chirp and hear them roar. (Animal noises) It’s a party on the zoo train so move just like the animals. So wave your arms and clap your hands and stomp your feet. Chugga chugga chugga chugga choo choo.” I am probably off by a few words, but well done Fisher-Price.

The variety of sounds, lower volume, and the fact that it rotates songs every time it moves makes this toy much less annoying than the Little People Toy Airplane we reviewed earlier. Our son has enjoyed this toy for a long time, and I really don’t have a lot to complain about. For those reasons, we give this item a 5 out of 10.

There are some additional animals that can be purchased for this toy. They can take turns riding in the back, or driving, the train! We purchased the kangaroo because our son loves to yell hop and jump around like kangaroo. Honestly, he likes any animal that jumps. The animals are also well built and can be played with on their own, independently from the train itself.

Like usual we try to keep all of our articles as up to date as possible. My kids still love this toy (and yes, this toy is still fully operational, even after we did our 2020 toy update) – but Fisher-Price has update their versions of it.

The newest version is a really good looking blue train – but it has a much smaller trailer in the back of it versus the long trailer my son’s version had.

This version still makes a lot of fun sounds and noises – and it does come with a conductor and Lion figurine vs. the Gorilla and Polar Bear that came with my son’s version.

Overall, this toy is still a lot of fun and you can see just how great it looks in that picture to the right.

Another newer version of these animal trains is the Little People Zoo Talkers Animal Sounds Train. This one looks a little bit more fancy than the one I bought my son – especially with the Ferris wheel in the back for animals. On a side note, could you imagine a real zoo train with a built-in Ferris Wheel?

This version comes with two animals, the train that pulls the Ferris Wheel, a train conductor, and it will make all sorts of cool sounds. The Ferris Wheel also spins around – which is a nice touch.

Overall, this version of the toy also looks really cool – but I have to be honest and tell you I haven’t had the chance to play with this version!

We have tried to compile a complete list of all the different little people train options that are out there, and you can see that current list here if you are interested: The Best Little People Toy Trains.

Our son really loves this toy because he can race it, crash it, because it sings catchy songs, and most importantly he loves animals. For children that love animals, trains, cars, or just like to use their imaginations, I would highly recommend this toy!

Don’t be surprised if this becomes an all-time favorite, so we give it gold star status (or yellow because it is brighter).

If you are looking for a few other fun Little People Toy ideas – check out some of these options:

and if you want something completely different – check out these very popular remote control care options:

Like always, thanks for reading – and we hope you get to have some fun adventures with these toys soon!