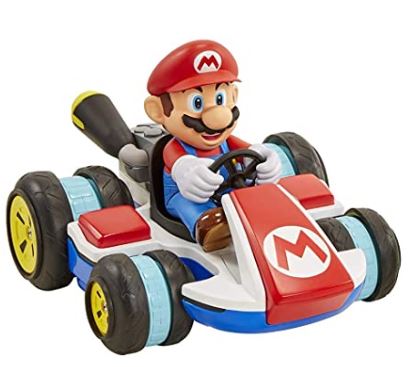 This led my wife and I to purchasing the Oldest the Super Mario Kart 8 Anti-Gravity RC Racer as his Christmas present this last Christmas (I know, I’m a little late putting up this review, but you know – life happens).

I’ll be honest, we haven’t had the best luck purchasing remote control vehicles in the past – but this toy has just been awesome! Our son loves it, he is still playing with it months later, and I’ve actually been really impressed with it as well!

Let’s talk about all the important information you need to know about this toy. First, it obviously comes with Mario driving his red racer and the remote control with a big Mario “M” right on it. The control is so simple to use, you got your forward and sideways control switch, your on/off button, and two button on the top.

These buttons on the top switch the car from a traditional racer to “anti-gravity” mode. Now don’t worry, this car isn’t going to go floating off on you. What happens is the wheels go from a traditional position to a sideways re-positioning. This allows the RC racer to glide along surfaces and perform cool tricks. Hit the button again and the wheels pop back into traditional position. This is really slick and easy to do – plus the anti-gravity mode is actually pretty cool!

The Mario/Vehicle itself is about 11 inches long or so, and 7 or so inches tall when you count Mario’s head. It is also relatively heavy – probably weighing a couple of pounds. I would definitely consider it durable – as it has run into numerous pieces of furniture and the Luigi RC Racer that my younger son got as a gift.

The box says that the remote will work up to 100 feet away – I haven’t checked to see if that is accurate, but it is a great distance. I will tell you; I was really amazed at how fast these cars go. I have pretty thick, shaggy carpet in our living room/hallway and it had no issues trucking right thru it. On the vinyl hardwood of the house the Mario RC Racer zooms by at awesome speeds!

Again, I was super impressed with the speed and the ability for these Mario Kart Racers to do tricks. They will pop wheelies, spin in circles at great rates of speed, drift really easily when in anti-gravity mode – and perform a world of tricks that it probably wasn’t designed to do, but my kids put it in tricky situations anyways.

What is the major downside for parents? These Mario Kart RC Racers do require a lot of batteries. It was either 6 or 8 AA batteries in the car itself, and another 2 in the remote. The batteries it came with drained quickly, so we bought some rechargeable Double AA batteries and use those; it hasn’t lost any speed when doing that!

The other small issue we have run into, is when we turn on the Mario RC Racer and Luigi Racer on at the same time the signals sometimes get mixed up. For example, the Luigi remote will start controlling the Mario car. Those online that say this can’t happen are wrong – I have seen it happen multiple times.

The good news is the fix is super simple. Just take the right remote and the right racer into a different room and turn them on and off again and they should connect properly. That simple and easy to use!

I should also note that the box says these toys are for ages 8+. Maybe I am a bad parent, but my kids were 6 & 3 when I gave them these racers and they didn’t run into any issues. It took them a little bit of time to get the controls down, but they don’t seem to have any problems racing these guys up and down the house!

One of the things I always like to do is tell parents how annoying this toy is going to be. There are a couple of annoying things about it.

1.) It is pretty loud. These isn’t a quite RC car – it makes some noise when it gets going.

2.) Younger kids are going to love driving it into things like furniture or your feet. That is just what kids do, and that can be pretty annoying.

3.) Those batteries can die pretty quickly, and there are a lot to change – and that can be expensive and annoying.

However, those annoying to parents’ factors – are generally speaking – the things that don’t annoy kids. In fact, my kids really like hitting my feet with their RC Racer. So, I’m going to give this a 5/10 on the annoyance scale.

The other thing we always like to do is look at how dangerous these toys could potentially be. Even with my overactive imagination, these are a hard toy to rank high on the danger scale.

They don’t have any small pieces to choke on; they are pretty heavy so I guess they could cause some damage if your child chucked them at you. But most likely, damage will come when the children run the car into your unsuspecting feet – but even that doesn’t hurt that bad.

So, I guess i’ll give it a 2 on the old danger scale. Overall, it is a safe toy.

Check out this fun video review we did for this Mario Kart Mario RC Racer – and even see it battle the Luigi RC Racer we reviewed as well! They really are two of my son’s all-time favorite toys!

Also, please follow us on YouTube for more great video reviews – we are excited to add this element to our 2021 bag of tricks!

Seeing how my kids love Mario & Mario Kart – plus how the Mario Kart Mario Anti-Gravity RC Racer is fast, durable, and a whole lot of fun – it would be super hard for me to give this toy anything but our highest Gold Star Rating.

I mean, anytime your child is still playing with a toy months after they get it for a Christmas present, that is a win, right? I think so.

If you have a Mario fan in the house and you are looking for a great gift idea – I think that Mario fan is really going to like this toy!