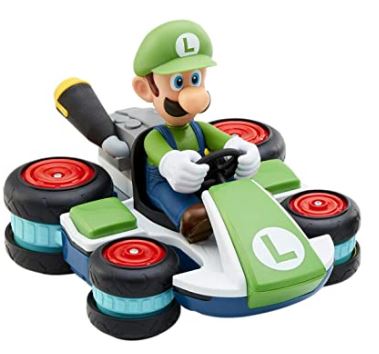 It is really amazing in my household how my oldest son was immediately drawn to Mario, and my youngest to Luigi. I’m not sure if that is because Luigi is just so cool my youngest had to like him more than any other Mario character; or if my oldest forced my youngest to like Mario’s younger twin brother.

Either way, it works out well for me – because I get to buy one of them Mario toys and the other one Luigi toys and there isn’t any fighting about that!

So, in fairness, we had to give you a great review of the Luigi Mario Kart 8 Anti-Gravity RC Racer; and show you why this toy is one of my youngest son’s favorite toys!

Let’s start with all the basic information you are going to want to know about the Mario Kart Luigi RC Racer.

First, it comes with a remote control and the Luigi Racer picture to the right. The remote is going to be super easy for your child to operate. It has one switch that controls the car side to side, one switch that makes it go back and forth, an on/off switch, and two buttons on the top that adjust the wheels into and out of anti-gravity mode.

Anti-Gravity mode is actually pretty cool. Basically, you take the Luigi racer out of its traditional race car style and turn the wheels sideways. This allows the racer to do some really neat tricks, and really drift along nicely on solid floors (the anti-gravity mode doesn’t work so well on shaggy carpets – but amazingly the regular race car mode doesn’t have any problem driving on my thick carpets!).

The RC car is designed nicely. It is about 11 or 12 inches in length, and about 7 inches high when you count Luigi’s hat. It is decked out in Luigi’s famous green color – and the control has a big “L” on it so you won’t get it mixed up with Mario’s if you own both.

The racer is relatively heavy – probably weighing a few pounds – even though I haven’t officially weighed it. It is very durable – I’ve seen my children ram this RC racers into furniture and other RC racers to cause a big crash scene.

I will tell you; I have been very impressed with the speed and ability for this Luigi racer to do tricks. It will spin around, do wheelies, and pick up speed quickly – much to the delight of my son. I am also impressed with the ability of this car to drive on my thicker carpeted areas. Doesn’t slow it down much, but it really blasts off on my hardwood floors!

What is also neat about the Luigi racer, is that it supposed to work up to 100 feet away from the controller! I haven’t tested that out – but that is quite a distance!

What are the downsides to the Mario Kart Luigi RC Racer? I will tell you it does need a lot of batteries to operate – I can’t remember the specific number but it is either 6 or 8 in the car. And they can burn out relatively quickly – which is why I recommend having some rechargeable batteries available.

I did run into a little issue when we try to operate both the Mario & Luigi RC racers at the same time. Sometimes the frequencies get crossed when you first turn them on, and the Mario control will control the Luigi car and vice versa. Separate them, take them into different rooms and turn them on, and the problem should be eliminated.

Overall, this is a great toy that I am impressed with and my child loves.

There are just a few things about the Mario Kart 8 Luigi Anti-Gravity RC Racer that are going to annoy you as a parent. The biggest annoyance I get out of this toy is the noise. It is loud – and when it is zooming around the house you are going to hear it – especially when it is banging into things.

Another possible annoyance is your child driving it into your feet. Maybe only my children are evil in this sense – but they do seem to delight in running into my feet. That is annoying, but luckily not very painful.

It also annoys me when I must change batteries out of a toy. And this one does have at least 8 that go to it. That is why it is so important to get some rechargeable batteries to go into it – save some money over time. Also, remind your children to turn off the toy – that will save a lot of battery life.

I did give the Mario RC Racer a 5 on the annoyance scale – but for some reason getting hit by Luigi doesn’t bother me as much….so I’ll give it a 4 out of 10.

A fan favorite – here is our danger scale; where we look at how much potential pain this toy could cause a sibling, parent, or even pet that lives in the household.

The good news: this is a very safe toy. It doesn’t have any small pieces, children can’t jump off of it, and there aren’t any sharp edges or blunt objects that can cause a lot of pain and easily be swung around.

Really, the only danger comes from the toy being thrown – but I don’t see that as a big issue – or you tripping over the toy. That is most likely, especially if you child is trying to run into your feet – but hopefully we can nip that behavior right away. So, let’s give it a 2 out of 10 on this scale.

Check out this fun video review we did of this toy – and don’t forget to subscribe to our YouTube channel for more video reviews right here:

My son would also agree with the Gold Star rating – but I do have to warn you he gives everything that Luigi is on a “gold star” rating. Like I said at the beginning, it is pretty amazing that he decided that Luigi was his go to character in the world of Mario!