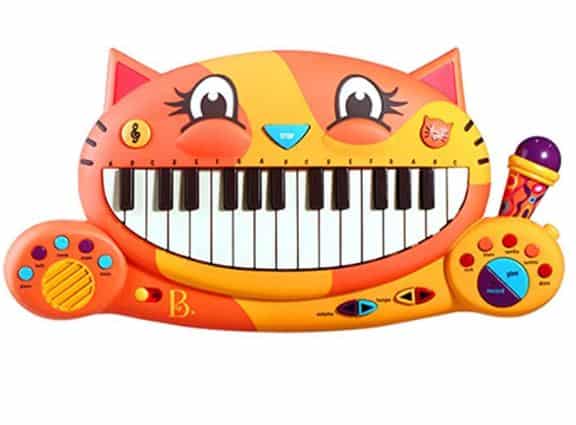 One of the fun things we do on this site is judge toys based on how annoying they are going to be to parents. It is what we call our Parent’s Annoyance Scale – and it has been a lot of fun.

I am always asked what has been the most annoying toy you have in your toy collection? I would say that honor belongs to the Cat Keyboard Toy that my wife purchased for some strange reason. I believe the real name of this toy is the B. Toys Meowsic Toy Piano. However, it is basically a functional keyboard that looks and sings like a cat.

We are going to have some fun with this Cat Keyboard Review and explain why it is the most annoying toy we own – and give you the backstory as well.

So, how did we end up owning a Cat Keyboard Toy? It started when we were at a relative’s house and I noticed my son had really taking an interest to the keyboard they had setup. He was having a great time playing with it.

I told my wife we should think about getting him a keyboard to play with. Seemed like a good idea to me – but I have no music talent whatsoever – so she said she would take the lead on getting a fun, toy keyboard that should be fun and maybe teach a little music at the same time.

What happened next, I can’t explain. My wife has a love for cats – and apparently when looking on Amazon she decided that a Cat Keyboard what exactly what our son needed. Not a musical keyboard like I asked for – but a Toy Cat Keyboard.

This probably happened because this Cat Keyboard resembles a smiling cat (obviously) – but also resembles the Cat Bus from the kid’s movie My Neighbor Totoro – which also happens to be her favorite kid’s movie. My son happened to love that movie as well, so it probably clicked in her head that a Cat Keyboard that looks like the Cat Bus from the Movie My Neighbor Totoro has to be the best toy in the world!

And so, my misery started. Our son loved it and he had to keep on playing it over and over again- much to my agony. I guess the moral of the story is to never let a crazy cat lady pick out a toy keyboard for your son.

What makes this Cat Keyboard Toy so annoying to parents and so popular with kids? Well, there are a few features that really set it apart from other toys. We mentioned the look above – which is that smiling cat face that looks like a character from a movie – but that is more creepy than annoying.

How about the fact that it has two buttons on it that when pushed plays music? One button plays the melody of 20 different popular nursery rhymes. The other button plays 7 Kitty based original songs – with Lyrics. YES, WITH LYRICS.

Can you imagine listening to some random kid, singing random kitty cat songs, from speakers on a toy keyboard for any long stretch of time? It is painful just thinking about it – now imagine living it.

We should also mention there is a button you can push to turn the volume up and down. However, the volume control button even at its lowest setting is LOUD – and at the highest setting is SUPER LOUD. You can’t escape the sound – it just seems to be loud and to carry to all areas of the household.

The keyboard itself is made from 17 white keys and 11 black keys – and it does have the A, B, C, D, E, F, G, scale printed above the keys. Like I said at the beginning, I have no musical talent, so I have no idea if the A Key really sounds like the A note is supposed to – but at least they are trying to teach music.

What if your child doesn’t want the keyboard to sound like a piano or a keyboard? Don’t worry the B. Toys Meowsic Cat Keyboard has you covered. Your kid can change the keys to sound like a piano, a banjo, bells, an organ…and a Cat’s meow. Yes, you child can make it so every key they hit is just the keyboard saying Meow at different pitches. This will drive the most patient of parents crazy – and delight your child at the same time.

Want to make things even worse? You can also pick some different beats for your child to play their keyboard over. Pick from a rock beat, blues beat, samba beat, techno beat, and a disco beat to hear the keyboard yell meow to. Whomever made this toy is an evil genius.

There are still three more major factors that are going to annoy you! One is there is a record and play feature – that includes a microphone to sing into. So, play that disco beat with your child singing about poop into the microphone and recording it so he can play it back to you! That is a good time for anyone!

How about a button that will let you turn the tempo up or down? Did you want to hear those original kitty-cat songs sung in a fast/or slow creepy voice? This toy has you covered. They really thought about everything!

We should also mention that if you don’t touch the keyboard for a while, but you have it left on – it starts to purr before it lets out a loud meow. What parent doesn’t want to hear a random purr and meow from their child’s toy cat keyboard? That won’t shock you at all.

So, I’m guessing you can see how this toy might drive you a little crazy. But hey, my son enjoys it. And I didn’t divorce my wife – so we got that going for us.

You see all the annoyance that this Cat Keyboard can cause. But in a slight twist – we are only going to give this toy a 9 out of 10 on the annoyance scale. Just in case we find something even more annoying, we always want to have room to grow.

And the one redeeming quality of this toy is it is small enough to hide in a lot of different places with minimum effort. And most parents aren’t going to mind this toy getting “lost” from time to time.

Need to see this Cat Keyboard in action to see just how annoying it is? Check out this video review:

This Cat Keyboard is the purrfect… (why did I do that, I hate myself) gift idea from a crazy Uncle or an Aunt that needs some payback to introduce into a home.

And like we said before, my kids actually liked this toy – but us parents not so much.