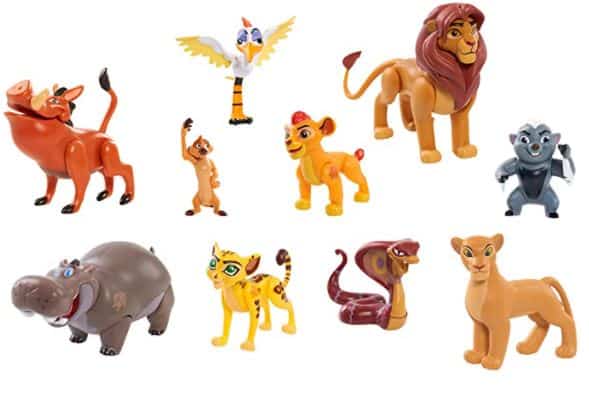 Even though our sons are not the biggest Lion Guard fans, they have had a lot of fun playing with their Lion Guard toys. If you know some children that are huge fans of the TV Show, or if you are just looking for some unique toy ideas, check out our list of the best Lion Guard Toys of 2021!

1.) The Lion Guard Pride Lands Deluxe Figure Set – The number one Lion Guard Toy on our list is the deluxe figure set from Just Play. This set includes 10 figures – Kion, Fuli, Bunga, Ono, Beshte, Janja, Rafiki, Simba, Timon, and Pumbaa – basically all the characters your kid would ask for!

This toy would be a great starting point for any child that loves this TV show. With all these different characters, your child’s is going to be able to play lots of different games and use their imagination to create lots of different adventures for the Lion Guard!

This set of figures also works on the different playsets that you can buy.

This set normally costs right around $30 – and if you want to read a full review on these action figures, please click on the link here (The Lion Guard Deluxe Figure Set Reviewed).

This is a set of 5 instead of a set of 10 like the deluxe option. This five figure set includes Kion, Fuli, Bunga, Ono, and Beshte – so the actual five members of the Lion Guard. Old favorites like Timon and Pumbaa are not included.

As you can imagine, less figures means it costs less, normally in the $12 to $15 range.

The downside to this toy is it only comes with two action figures – Kion and Janja. So if you want to take advantage of all the special features this training lair has, you will need to purchase the Deluxe Figure set listed in option one to go with it.

If you don’t buy the extra figures it can still be a lot of fun as you can use Kion and Janja to do some fun things. You can also use regular toy army men or other action figures on the playset as well. But the most fun is going to come from a combination of this playset and the Lion Guard action figures.

This playset usally costs about $60 – and for a full review of our experience with it, please click on the following link (The Lion Guard Training Lair Playset Reviewed).

This playset does have a surprise floor trap door, a collapsible rock ledge, a boulder launcher, and even a motorized vine lift. So there are plenty of features your child will love with this playset.

It only comes with 2 figures including Kion – so again it is another toy that many parents will purchase with the deluxe figure set. It does have a couple of cardboard cutout figures, but these aren’t going to last very long.

It is normally about $35 in price – which is about half the cost….and half the size…of the Training Lair playset.

For example, this Lion Guard Playset comes with a boulder launcher, a surprise leaf floor trap, and a collapsible rock ledge that will drop your enemies into a bone trap. There is even a hidden passageway in the waterfall.

This toy also comes with a Kion figure – and if you want the rest of the gang, we recommend you purchase one of the toy figure sets to go along with it! If you do that, your child should have a lot of fun getting into all sorts of Lion Guard adventures!

The playset looks like a villain’s playset. It has a bone-jaw jail, a spinning tree lookout, and a collapsing floor that drops people into a lava river….you know, all the stuff a villain needs to be successful. It also comes with a Janja action figure since he is the main villain in the show.

You can incorporate any of the 3” figures (so basically the deluxe figure set we were talking about) into this playset as well.

With a price right around $20, this would make a great addition to any kid’s toy collection that loves the Lion Guard…or villains.

This 4-piece Beanie Baby set includes Kion, Fuli, Beshte, and Bunga – and all of the stuffed animals are about 6-inches in height. They are made from that awesome plush material that we all remember, and these Beanie Babies have a real sparkle to them – especially their eyes!

This would be a great addition to any Lion Guard fan’s stuffed animal collection!

This fun 16-inch stuffed animal is both a stuffed animal and a pillow! If you are unfamiliar with Pillow Pets, they unfold from stuffed animal mode to pillow mode – making them an amazing companion for naptime! They also don’t have zipper or anything that would hurt you while laying on it. They are made from chenille fabric that is easy on the head.

If you are looking for that special bedtime Lion Guard stuffed animal, this needs to be at the top of your list!

This Bunga figure stands 8-inches tall and is a posable figure. It also has a button on the back, and when pushed Bunga will move, light-up, and make all sorts of sounds.

10.) The Lion Guard Licensed Story Book Set – There are a lot of different Lion Guard books that you can buy, but these is a neat little set that includes a book, play mat, and plastic figure set.

The book is a simple 10” x 8” hardcover, 10 page story book. The play mat is 24” x 36” and the actual plastic figures are 2” tall. You get a set of 12 plastic figures, which includes pretty much the entire gang, including the Hyenas.

The downside to this toy is the action figures are smaller and not as well built as the deluxe set listed as option one, but this is a great toy for younger children.

The entire set normally costs around $17.00 – and should provide some fun for children that love this TV show!

This board game is recommended for children ages 4+, and it is a game that involves lots of teamwork. The objective is to get your Lion to the top of Pride Rock before any Outlander (snakes, vultures, hyenas – you know the evil guys) get to the spaces out in front of Pride Rock.

It has plastic moving pieces, cards that are played, and the board is a 3-D vertical game board.

With a price right around $20, you can have lots of fun defending the pride lands as a family!

The set is small, but includes 3 drums, a cymbal, a stand and two drum sticks. It does require some adult assembly, but once built, your child will be able to play away!

At the end the day, this is a Lion Guard themed toy drum set that will be fun for children that love to “play” musical instruments or just bang things with sticks.

It normally costs right around $35 – which isn’t a bad price to annoy parents with.

13.) Disney Lion Guard Kion Talking Plush Toy – I know my sons were always into stuff animals, and if your child loves the Lion Guard and stuffed animals, well this will be a great choice for you!

What is neat about this plush stuffed animal is that it also talks. There are four different phrases from the show that this stuffed animal will say, and when he talks his Lion Guard mark lights up. Kids seem to love toys that talk and light up, and this one does both!

It is just over a foot tall, and the plush materials are soft. The normally price is right around $25, but I’ve seen it on sale a lot for about half of that price.

It should be a great addition to any stuffed animal collection.

14.) Disney Lion Guard Bunga Talking Plush Toy – This Bunga toy option is about the same as the Kion Talking Plush Toy listed above – but obviously it is a different character. So if your child loves Bunga a lot more than Kion, and you are only going to buy one stuffed animal, this is the one for you!

Just like the Kion option, this toy has 4 different phrases it uses and his Lion Guard mark will also light up when he is talking. My child seems to like Bunga the best from the TV show because of his sense of adventure – so he would be the top choice in my house.

Basically everything else – price, size, materials – as the Kion option listed above. So really your decision would be am I going to buy both of these talking plush toys, or am I going to make my child pick the character he likes the best!

These are just some of the best Lion Guard toys that you can find. If you have had a good experience with a Lion Guard Toy not listed here, please let us know! We are always looking for new toys to review and add to our lists!