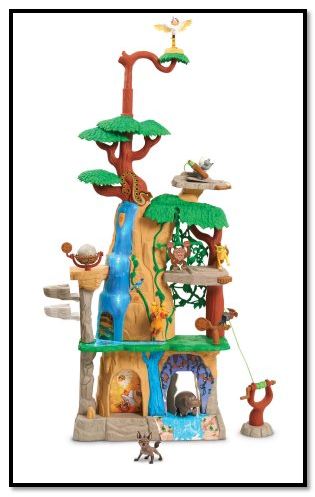 Certain toys that my children own really make me smile – with one such toy being the Lion Guard Training Lair Playset that my oldest child has. My son loves this toy – which is funny, because he doesn’t really like that TV show.

Why he decided he needed this toy was because he got a hold of my phone and watched countless videos of other people playing with toys/reviewing toys. When he saw all of those YouTube stars having the time of their life with this playset, he set his mind to making sure his parents would buy it for him.

My son was about 3.5 years old at the time, and he started to attempt Jedi mind tricks. For example, I would tell him I was going to the store – and his response would be “are you going to the store to buy me my Lion Guard Toy?” – seeing how he never really watched the show, I was pretty shocked he would say things like that.

He would also act super sad – and say things like “you know if I had that Lion Guard Toy I would be super happy again.” After a few days of using these techniques, he convinced his sucker parents to buy that toy for him.

In our defense, we did make him earn it by doing chores and such – but his techniques used to get us to buy this toy were off the charts effective.

The good news is this toy has brought a lot of enjoyment to our household, and even with the toy, he still doesn’t watch the TV show much (which is good – Dad would much rather watch Miles, Sheriff Callie, Paw Patrol, Rusty Rivets, or educational videos).

This playset is recommended for children ages 3 and up – and is impressively tall. It actually stands about 3 feet in height, and it stands up with no problem due to its solid base.

The big selling point with this toy is all the bells and whistles it comes with. The bottom part of the training lair is a waterfall door that can be “busted open” and a cave drawing lair that makes noises and spins arounds when the knob to the left of it is twisted.

There is also a rock “elevator” that can lift figures to the second floor of the training lair – as well as boulder drop area. The boulder drop is a big basket that has a lever on it and a toy boulder. My son has spent countless hours dropping that boulder onto many different characters and army men.

The second floor has a nice flat platform for the figures to rest on, plus another “climbing area” where you can attach a figure and have it climb up the rocks. There is also a vulture that is sitting on a perch on this floor.

The 3rd floor area has a perch that spins arounds as well as my child’s favorite feature of this toy. There is a platform where you hit a switch and it sends your figures flying. It is meant to be a bungee jump perch where you attach a figure to the bungee jump line, hit the switch, and send them soaring in the air. My son doesn’t attach them to the bungee line and just launches figures off of the platform.

At the very top of this toy is a long perch that is meant for the bird character….which I can’t remember their name. This top lookout perch can be removed to have a toy “telescope” – which you child can look through.

Other features include a waterfall that will make noises and light up – and a removable zip line piece that can be connected to the lair and used as a zip line. I also forgot about the big arrow launcher. It is hidden behind a secret door on the second floor and it will launch arrows a pretty good distance when used. It comes with two plastic arrows that can be shot, and my son also really loves that part.

A couple of negatives that go into this toy. It only comes with 2 figures – a hyena named Janja and the Lion Kion. That means you have to buy the rest of the characters separately to use all of the special features this training lair has effectively (for example – the bird perch really doesn’t work if you don’t own the bird toy).

Some of the features are also hard for younger children to use. It can be difficult for them to attach the different characters onto the bungee clips for example. Also, every time it falls over the top lookout part seems to pop off, and my son has a lot of difficulties getting that reattached. That can get annoying – especially if they insist on removing it constantly.

3 AA batteries are needed for the sounds and lights to work, but they are included.

With those couple of negatives set aside, my son adores this toy. He begged us to get it, and he still plays with it almost every day months later. It has all sorts of secret doors, buttons, and things you can do with it, making it one of the best toys we have ever purchased.

The good news here is this toy is very safe. There are a couple of small plastic pieces that could be potential choking hazards – so use proper adult supervision with small children.

Some pieces could be thrown – such as the toy boulder. The boulder is really light so little to no damage should happen from that. The zip line stand, Kion, and Janja are a little bit heavier, so some potential damage could happen here. Just use whatever technique you use as an adult to get children to stop throwing toys to prevent this from being an issue.

The toy is light enough that even if it gets pushed over onto another sibling, nothing bad is going to happen there.

What you have here is a very safe toy that reads at a 2 on our danger scale.

There is virtually no assembly required, so nothing annoying there (I’m looking at you KidKraft Kitchen Set that I hate).

The annoyance comes from some of the features being hard for children to use (the older they get the less of an annoyance this becomes), the toy only coming with 2 character figures, and the top lookout part popping lose a lot.

Most children are going to want to be able to have all the characters, so buying them is a little bit of an expense to get the full experience of this toy.

For most parents, the annoyance is going to come from having to place the lookout perch back on the toy over and over again, and having to put the figures on zip lines and some of the other features.

These are only minor inconveniences, so I give it a 4 out of 10 on the annoyance scale.

This Training Lair Playset toy has stood the test of time in my household. It has taken some abuse, and a couple of the pieces have broken off, and I think we lost the projectiles that get launched – but overall it has been a great toy that the kids still love!

This playset is harder to find in stores than it used to be, and there have been a few other smaller Lion Guard playsets that have been released since. We listed those here for your convenience.

If you can find this toy for sale, we would still recommend purchasing it – and we have had a lot of fun with it over the years!

This toy has also been adapted from being just a Lion Guard Toy, to becoming a fort for his army men and paw patrol toys too.

The bungee jumping launch platform has always been his favorite part, and I could see any child launching different figures off of it – even if they aren’t a fan of the TV show.

At the end of the day, I’m kind of glad that my child used his Jedi mind tricks into fooling me into buying it. We are giving it a gold star rating on this site – and will expect the children or child you buy it for to have a lot of fun with it as well!

Here are some other great Lion Guard Toys we Reviewed:

If you want some other great Disney Junior Themed Toys to play with, check out these options:

Enjoy all of your Toy Adventures!