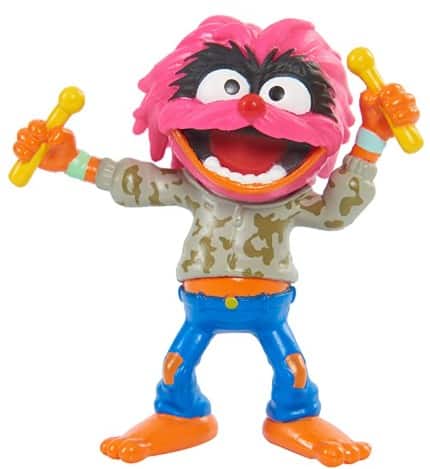 One of the neat things about being a parent to young children right now is that all the TV networks are bring back our childhood favorites. It wasn’t too long ago that I was a child watching Muppet Babies on Saturday mornings (okay maybe it was a little while ago – like 30 years or so).

So, I was pretty excited when my children started to take an interest in the new reboot on Disney Junior. There have been some changes – such as Skeeter & Scooter being replaced by Summer (she is a penguin) and Rowlf being a part-time character – but the core characters and positive messaging has stayed very similar.

Of course, with a series reboot comes an entire line of toys that need to be marketed to children! That is the case with this series, and my oldest son happened to purchase the Muppet Babies Toy Figure Collection as a gift to my youngest son for his 3rd birthday (we are nice and let each child pick out a gift for the other one for Christmas/Birthdays).

So, here is our quick review on the Muppet Babies Toy Figure Collection so you can see if it would be a nice way to pass on your childhood favorites to your child!

There isn’t anything to complicated about the Muppet Babies Toy Figure collection. The standard package comes with the main six characters, and they all stand about 2.5 inches tall. They don’t make any special sounds or do any special movements – so they are very basic toy figures.

One downside to this toy is that they are in a stuck position. The arms for example can’t move. They are stuck in cool positions, and the actual details of the toy figurines are great, but it would be nice if they had some freedom of movement.

They are made from a very durable plastic that has been surprisingly resistant to being tossed around by a 3-year old.

So, what do you get when you buy this Muppet Babies Toy Character Pack:

And again, all of these toy figures look great and are in their TV Show outfits! If your child likes the Muppet Babies and can do a nice job of doing imagination play – than they will like these toys. If they struggle with imagination play, or you can’t get your child to play with toys that don’t do anything – they won’t be the biggest fan of these.

If you are new to the site, you probably don’t know one of the unique things I do is grade these toys on how annoying they are to me. The good news for these toys is they aren’t annoying at all. Since they don’t dance, or yell, or make loud noises – there really isn’t anything for me to get mad at.

They don’t even hurt that much when you step on them. I probably should try stepping on each individual toy figure and see which ones hurt the most, but I don’t think I want to put my feet to that test.

I’m going to give them a 1 out 10 on this scale – because I really aren’t annoyed by them and I like them from my childhood. Even if the current show is a little bit different.

The other thing about this toy is that they aren’t very dangerous. They are recommended for children ages 3+, but there aren’t any small pieces and they are too big to choke on.

Really the only danger is if your child is a thrower. They have a little bit of weight to them, so they can leave a mark if they bounce off your forehead or smack your TV. I have seen my child get some pretty good distance chucking these down the hallway.

This really is a simple toy. So, the question is going to be is your child good at imaginative play? If they are, they will like this. If not, probably won’t get a lot of use out of it.

It does help if your child also likes to cross-imagination play. What I mean by this, is these Muppet Babies Toy Figures are often going on adventures that take them to Bowser’s Castle or the Lion Guard Training Lair Play Set; which helps give these toys for shelf life!

I’m going to give this toy a silver star rating – but it could easily be a bronze star in some household!