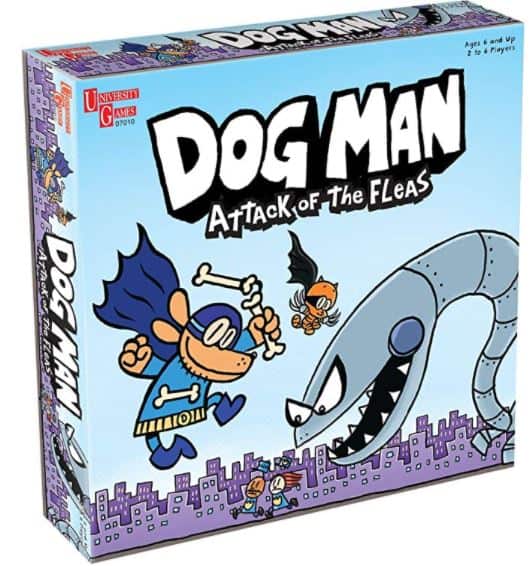 Board games are a very popular activity in our household – and we make sure we buy each of our kids at least one new board game each Christmas. It was an easy choice to which board game we wanted to get our oldest son this last Christmas since he had a newfound obsession with Dog Man books by Dav Pilkey.

Needless to say, he was thrilled when he received the Dog Man Attack of the Fleas Board Game. He had never heard of it before, but was thrilled to see anything related to Dog Man.

Quick Dog Man Attack of the Fleas Board Game Review

One of the things I really like about this Dog Man Board Game is that all the players are going to be working together as a team. This is becoming a pretty popular concept with board games lately but isn’t something I have had a lot of experience playing.

The game is for 2 to 6 players – and the more players you have the easier the game is. Playing with only 2 plays can be a little difficult. It is recommended for children ages 6+, but I will say that my 5-year-old had no problem picking up the rules and playing it effectively.

All of the players are going to pick a character from the Supa Buddies they want to play as (The Bark Night, Cat Kid, Lightning Dude, Petey, the Chief, and Sarah Hatoff). They all start at their respective spots and you will work together to defeat the fleas.

You work together by spinning the spinner and moving your piece the appropriate number of spaces. Each player collects tools from different spaces on the board, and as a team you are going to use the tools call shrink rays to defeat the fleas. Each player also takes a turn spinning for the bad guys the fleas – and moving them closer to the end of the board.

These rules are easy to follow, it is fun to work as a team, and the game play is quick – probably around 10 minutes or so per round. It really is that simple and my sons and I have had a blast playing it together!

Overall Thoughts on the Dog Man Board Game

Overall, I would really encourage you to purchase this board game if your child loves Dog Man or you just love playing unique board games. The rules are simple enough and the characters are fun enough I don’t even think you need to be a fan of the books to enjoy the game – although that would obviously increase enjoyment if you are a fan.

I think you will also be able to play this game for a number of years. The rules are simple, but the concept if fun – and being able to work together as a singular family team to defeat the evil fleas should being hours of enjoyment!

Final Grade and Other Links of Interest

I keep trying to play Dog Man Attack of the Fleas with my kids and they haven’t told me to stop playing with them – so I ‘m going to give this board game our highest rating possible, a Gold Star!

Again, if your child loves the Dog Man series of books, I don’t know how they aren’t going to like this game. And even children that aren’t familiar with Dog Man should have some fun with this one.

If you want to learn about some other board games we play in this household, check out the following reviews:

We will continue updating the site with new board games we play so check back frequently!