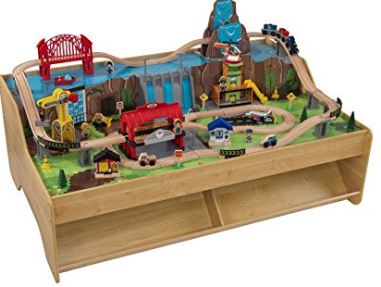 One of the fun things about toys is the story behind them. Every toy can bring back a unique set of memories.

The story behind our son’s KidKraft Grand Central Station Train Table is certainly unique…and a little bit of a horror story.

My wife and I like to give each of our sons one large Christmas present each year, and we decided that a toy train table would be the perfect gift from Santa.

We had a great plan in mind that included us getting up on Christmas Eve to get the train table all built, and we were going to have it ready to play with as soon as the boys woke up.

Little did we know that a bout of food poisoning the night before Christmas Eve would make that an incredibly difficult task to complete. After being unable to do anything for about 35 hours, we were finally able to start construction on the train table around 1:00 a.m. on Christmas morning.

I should actually say that my wife was able to start building the train table while I laid on the coach with our cranky infant son. The build of the table was all my wife – I can’t take any credit for it.

After about 5 hours of work and trying to read directions through a state of mental fogginess- my wife completed the product.

Our son did wake up a little bit early that morning, but he was a good sport and patiently let my wife finish building the tracks while he sat in his chair.

All things considered, this train table had been a fun toy and a big hit with our sons, but those memories of food poisoning and late night building are not nearly as fond.

There are a lot of different KidKraft Train tables you can buy. Each of them have different backgrounds, track setups, and pieces that go with them.

The option that we purchased is the Grand Central Station KidKraft Train Table. That is the option we are focusing on in this review!

The table is well sized, with basically a two story layout. It’s about 2 feet tall, and is plenty wide and plenty long. When fully put together, I’m estimating that it weighs 30 pounds, but it is light enough to be moved by one person.

It had close to 100 pieces when you include the track, toy signs, trees, train cars, and everything else that is included.

There are two different design options for the tracks themselves that are outlined in the instructions- and you need to follow those design options if you want your track to flow properly.

The pieces secure relatively nicely, and a helpful tip is don’t be afraid to use a little bit of force to lock the wooden track pieces into the plastic support pieces.

It will take you at least 5 minutes to build the track every time it gets destroyed by your toddler- so I know some parents that will super glue the pieces together. This isn’t a bad idea- especially since building the track properly can be very difficult- especially if you don’t have the instructions in front of you.

What is really nice about this train set is all the fun pieces it comes with. The track has a bridge, mountain, waterfall, and train station that can be driven on or by.

The two tier table means the trains can gain some real speed going downhill, and those downhill corner pieces have rails on them that help keep the train on the track.

It has built in storage shelves on the bottom, which is really nice since the set comes with around 100 pieces!

Besides the train itself, it also comes with a police car, fire truck, bull dozer, and other vehicles that can be driven on the tracks too. There is even a little wooden boat that you can place on the lake that’s painted onto the table.

Besides those transportation toy pieces, your train set includes trees, signs, buildings, a crane, and much more.

The crane even can hook onto some of the pieces and load them onto the trains. With so many different pieces included, the playtime options are almost unlimited – your child should get a lot of enjoyment from this.

We should warn parents that the table does take up a lot of space, and the plastic signs are easy to snap – so watch for broken pieces if you have young children.

This toy is a tough one to grade. The base is very sturdy, and even though I wouldn’t recommend it, a 40 or 50 pound child can easily sit on top of the table without causing and problems.

Like most tables, it does encourage young children to climb on top of it and jump off. There is always some inherent danger to children jumping off of platforms.

The plastic sign pieces aren’t the most durable, and I believe most of ours snapped pretty quickly. This can create a choking hazard for very young children.

The wooden tracks and pieces can be thrown and some of the larger track pieces could theoretically be used as a club – but isn’t that the case with most toys?

The train table is heavy enough that most children aren’t going to be able to push it around, and they won’t be able to lift it up. This means if you were strategic in your placement of the table, you can really eliminate any dangers that could occur from them jumping off the platform.

If you build the table properly and place it in a safe spot, you really eliminate most of the dangerous eliminates of this toy. Just make sure you keep broken pieces away from really young children.

Realistically since jumping off the train table platform is our biggest concern, I’m going to give this toy a 4 on the danger scale.

There is a ton to like about this toy. It doesn’t make any sounds or noises (except for your child crashing the pieces into each other).

It’s also very large in size, safe, and encourages independent playtime which are all major pluses.

The downside comes in two places. The first is the initial setup. There is no way around it, you are going to take a few or so to build the tracks. That might even take 5 hours if you are recovering from a bout of food poisoning.

The other downside is that the tracks need to be rebuilt every time your child destroys them – or the baby sneaks into the room and breaks apart the tracks in a fit of excitement.

It takes a decent amount of time to rebuild the tracks, and it is a fairly complex job which a lot of young children can’t do by themselves. Without the directions, it can be difficult for adults to put it together! This can get frustrating quickly.

This is why a lot of parents will get those pieces super glued in place. Also don’t lose or break a track piece or support. Without them, the track is going to have a flaw or two to them.

Personally, we never super glued the pieces meaning our train track is disorganized more often than not. The good news is the built in storage selves make it very easy to contain the pieces, eliminating that annoyance of losing pieces and stepping on them later.

However, when the train tracks are disorganized and I don’t have time to rebuild them, I just encourage my son to be imaginative with the train set, and use it as a farm table or a battlefield. Or I encourage him to try and make his own train track design…which often includes large gaps for the train to jump off of!

Overall the positives greatly outweigh the negatives, once you get past the initial frustration of building it, we give it a 4 on that annoyance scale. It will be even less if your kid doesn’t disassemble the track!

A lot has happened since we first wrote this toy review. This Grand Central Station Train Table really isn’t made anymore by KidKraft – but don’t worry – they still make some great train tables with a lot of similar qualities to them!

Our train table is still in our toy room and still be playing with. I would say less as an actual train table and more as a platform for many different games they love to play. It also seems to be a platform for them to play “floor is lava” and believe it or not, the train table hasn’t taken any damage.

Very durable toy that deserves that silver star rating we gave it!

This is a great toy. It does take a lot of room, so make sure you have enough room in your toy area for it. You do want to make sure your child can get behind it so they can easily maneuver the train.

Our son loves playing with the train, but also using the platform as a play area for many different other adventures.

Due to its safety, the amount of fun pieces you can play with, and the fact that it encourages imaginative and independent play, we are going to give it a silver star rating. It would probably be gold star except for the fact it does take up so much room!

Our sons have loved playing with it, and I imagine your children will have just as much fun with a KidKraft Toy Train Set!

If you are looking for some other great toy options; we encourage you to take a look at these links:

I think this list of toy reviews should keep you busy for a while!