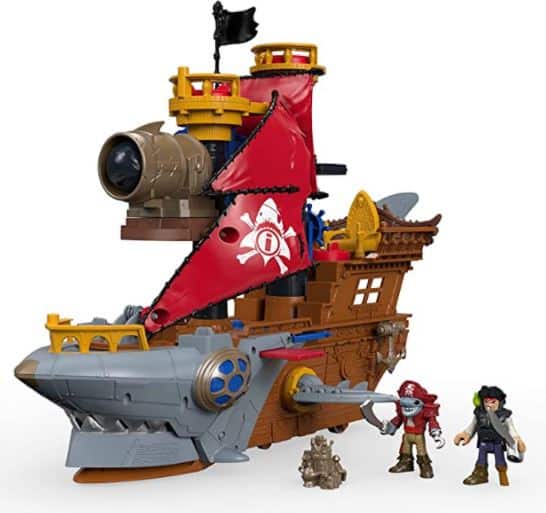 I am pretty sure most kids love pirates. I am not sure if that is because of how TV shows and Movies portray pirates, or it is just some genetic makeup that all kids seem to share!

Enjoy! With about 25 different pirate toys on this list, I’m sure you will find a pirate toy that will excite the kid you are shopping for!

What is the Best Pirate Toy for Children Ages 3 to 8? The answer to that question is the Fisher-Price Imaginext Shark Bite Pirate Ship.

There are a lot of cool things about the Fisher-Price Imaginext Pirate ship that kids are going to really enjoy. Here are a few of those highlights:

Between the pirate action figures, secret hiding places, cannon, projectiles that get launched, the plank, and the great pirate/shark theme – there is just so much for your child to enjoy!

These very popular toy from Fisher-Price has great reviews and a great price tag – making it our best children’s pirate toy for ages 3 to 8!

What is the best pirate toy for toddlers? The answer to that question is the VTech Treasure Seekers Pirate Ship.

The VTech Treasure Seekers Pirate Ship should bring a lot of joy to any toddler’s playtime adventures! This toy is recommended for ages 1-4 and has a lot of great features including:

The only downside is it does take 2 AA batteries that you should replace when you purchase.

Overall, this is a very well-priced toy for toddlers that is easy to play with, colorful, fun, and going to bring a lot of enjoyment!

Hopefully, your kids are like mine and just love LEGOs. If they are, then they are going to love this LEGO Create Pirate Ship Building Set!

Here are some of the set highlights:

I guess the best thing we can say about this toy is that if you love LEGOs and you love Pirates, you are going to love this toy!

Of course, there are some other great Pirate Toys that kids are going to love that we wanted to list out for you! Hopefully, this gives you some great ideas on what to pick for your kids!

Final Thoughts and Other Links of Interest

Here is our quick recap:

And of course we got that list of 20 other great Pirate Toys listed!

If you like pirate toys but are looking for something a little bit different check out these other great toy review lists we did:

Between these lists of toys and all the great Pirate Toys we listed out, we think you are going to be able to find a toy that children are really going to enjoy playing with!