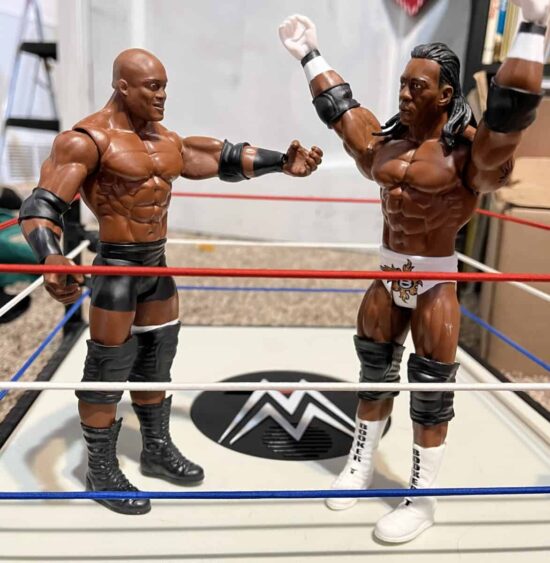 Does anyone else have a kid that is going through a WWE fanatic phase – where they are basically obsessed with everything wrestling? That would be my oldest son currently, where he wants WWE Action Figures, books, video games, toys, and I’m not sure if I can handle listening to “The Time is Now” by John Cena and Tha Trademarc one more time.

Now the bright side is that WWE is known for their ability to produce fun toys and merchandise, so I’ve been able to satisfy his needs on that. One of the action figure sets that he has loved playing with would be the “Smackdown Showdowns” Series 2 Championship Showdown Bobby Lashley vs. King Booker action figure 2-Pack. This is one of a handful of different action figures we ended up purchasing for his birthday and Christmas presents.

Overall, there are some really cool features to these action figures, and hopefully this “Smackdown Showdowns” Championship Showdown Bobby Lashley vs. King Booker review will help you determine if this would be a great addition to your collection!

I should start by saying there isn’t anything special or over the top about these WWE Action Figures. They don’t make any special noises, they don’t light up, they don’t stretch out – they don’t do anything crazy like that. What is awesome about these Bobby Lashley and King Booker figures is all the basics are terrifically done.

What I mean by this, is that the look of both the Bobby Lashley figure and King Booker figure is terrific. Both wrestlers are instantly recognizable – and the ring attire, especially King Booker’s, pops with color. They even got King Booker’s tattoo looking good. You will not be said about how these action figures look.

The action figures themselves are about 6-inches in size, which is a perfect height in my opinion. Each figure has 10-points of articulation, meaning you have hands, feet, legs, waists that can be moved to many different positions. You are going to be able to move both of these figures into all the different wrestling positions you need.

Included in the Bobby Lashley vs King Booker is a stand for each wrestler. They can be placed on these stands anytime they aren’t wrestling! The Bobby Lashley stand has his name on it – and the King Booker stand has 5X on it – which I imagine signifies him holding the WCW World Heavyweight Championship five times.

The other neat thing about these figures is that they are based on actual rivalry these two WWE superstars had. Bobby Lashley vs. King Booker would make a great start to any WWE Action Figure collection. My child plays with this action figure set all of the time, and I’m sure you would get the same response!

If you need a place for these action figures to wrestle, we have really enjoyed our WWE Wrekkin’ Steel Cage Ring we have purchased. You can read about that toy in the linked review.

Final Thoughts and Other Links of Interest

This WWE Championship Showdown Bobby Lashley vs King Booker Action Figure Set has been very popular in our household, and I’m really glad we bought them for my son. The figures are very durable – I’m seen them take some big falls and big crashes from some out-of-control wrestling matches, which makes me think parents will like that as well.

We are going to give this figure set a Silver Star rating – and would encourage you to add them to your collection! If you aren’t sure if your child would like King Booker and Bobby Lashley – we also have had a lot of fun with our John Cena vs. the Rock & Drew McIntyre vs. Goldberg sets. However, if those wrestlers are a little old school for your child check out this Complete List of the WWE Championship Showdown 2-Figure Sets, there are over 30 different options, so you should be able to find something that your child likes.