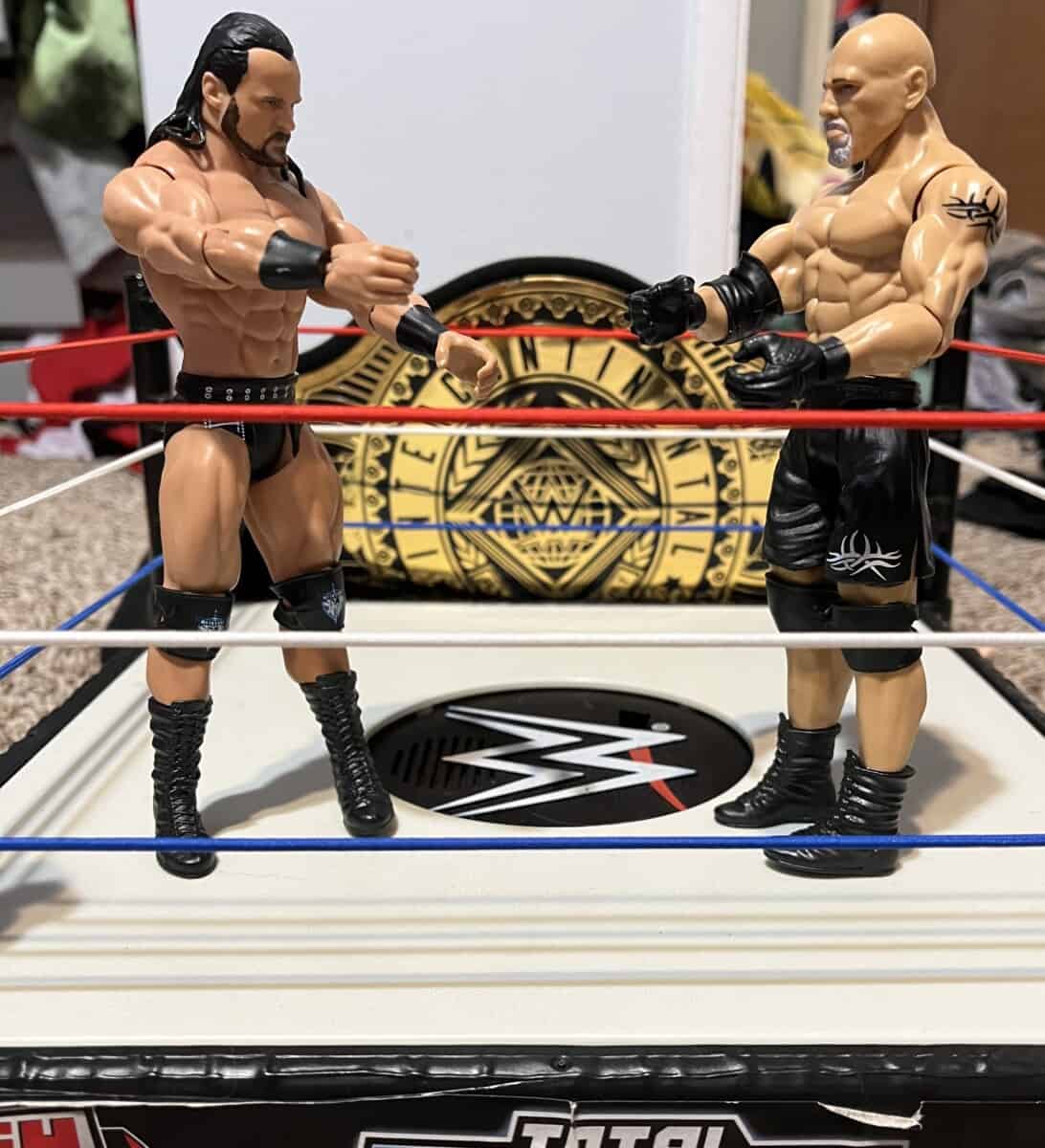 So, when he was asking for as many WWE action figures as possible for his birthday and Christmas, it only made sense for us to purchase the WWE Championship Showdown Series 8 Drew McIntyre vs. Goldberg 2-Pack Action Figure set. It features the old school Goldberg vs. Drew McIntyre, which also happened to be one of his favorites! This figure set reflects the 2021 Royal Rumble match and rivalry that Drew McIntyre had with Goldberg – and the eventual victory that Drew would have over him!

Please enjoy our Drew McIntyre vs. Goldberg Action Figure Set Review and we hope it helps you determine if this would be a great starting point or addition to the WWE toy collection you are building!

What you will enjoy the most about this WWE Action Figure Set is the realistic look that both Drew McIntyre and Goldberg have. Goldberg is wearing his black shorts and gloves and even has his recognizable arm tattoo. Drew is wearing his classic black ring attire – and the kneepads even have McIntyre with his Sword/Crest symbol on them! The attention to detail is really prenominal.

Both figures are about six inches in height and have plenty of waist, arm, leg, head, and hand articulation. You won’t have any issues maneuvering the figures into different positions to perform your favorite wrestling moves. The figures are also made from some very durable materials – I’ve seen these guys take some major bounces and survive some outrageous moves from some of my son’s wrestling matches that get out of control!

Also included in the figure set is a base that both wrestlers can stand on – and a plastic stand that each wrestler can get attached to. This does allow you to put them in some fun poises on the stand when they aren’t being used.

This is really the highlight of this action figure sets. They don’t do anything special or make any special noises, but they are well designed to look great and with all the points of articulation, they are great for doing actual wrestling matches!

Overall, my sons have loved playing with these guys, and they have had some major battles.

Overall, we are very happy with this Drew McIntyre vs. Goldberg WWE action figure set. I don’t have any complaints about the action figures themselves, with really the only thing I can hear kids complaining about is not having a ring/or place for these figures to wrestle. If you find yourself in that situation, I recommend the WWE Wrekkin’ Steel Cage as a great option that we have really enjoyed!

If you like the idea of these figure sets but aren’t sure if your child is going to like Goldberg vs. Drew McIntyre, there are a bunch of different figure set options! We own this one, plus we did reviews on The Rock vs. John Cena and King Booker vs. Bobby Lashley. Plus, we also put together this HUGE list of the over 30 different WWE Championship Showdown Figure Set choices! I bet you are going to be able to find an action figure set you like from that list!

Overall, we are going to give this figure set a Silver Star Grade, and I’m pretty sure you are going to have a lot of fun starting a collection with these or adding to your current collection!