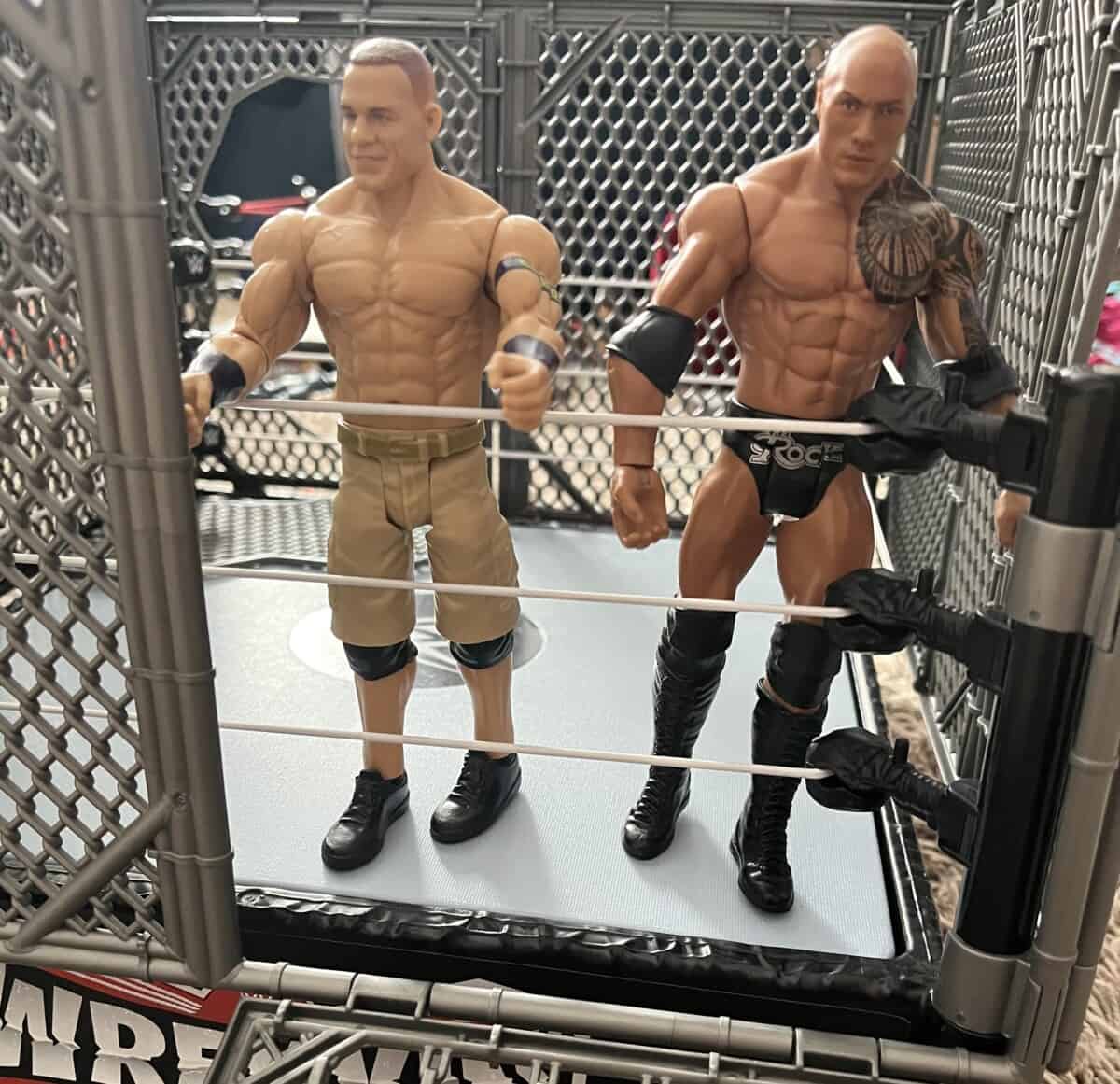 One thing you have to love about the WWE is that they do a tremendous job of producing toys, clothing, video games, and other merchandise of your favorite WWE superstars. So, when your oldest child is going through a major wrestling obsession, you are going to be able to find some figures and toys they are going to love!

Which was a big reason we ended up buying the WWE Championship Showdown The Rock vs. John Cena Figure Set. My oldest child loves John Cena – which is why we hear his theme song about 15 times a day, and my youngest son went old school with his love of The Rock. Having a figure set that includes both of my children’s favorite wrestlers is a big bonus!

Hopefully this WWE Championship Showdown The Rock Vs. John Cena Figure Set Review will help you decide if this would be a great addition to your child’s toy collection – and you also get to hear about our personal experience with these toys.

This review is not going to be the most intensive review that we do, but this figure set gets the basics right! Both figures are about 6-inces in size and are both very realistic looking. The Rock figure comes with his trademark black trunks with the “Bruma Bull” on the back and even includes his black elbow pads. The figure even includes his tattoos!

The John Cena figure includes his cargo shorts and goes into some cool details like having “U c Me” on his wrist band and “CENATION” on the band that goes around his biceps. Both figures include 10-points of articulation – including hands, a waist, arms, feet, a head, and shoulders that move. Each figure will be able to do different poises and signature moves, which is important to any wrestling fan!

Also included in the WWE John Cena vs. The Rock figure set is a WWE Championship base that both figures can stand on. There are little holes in their feet that attach right to the base plate. There is also a plastic piece that can be connected to each wrestler and attach to the base if you want them to do a certain poise on the base.

I’ve also been impressed with how durable these figures have been. They have been dropped and thrown during some wrestling matches that have gotten out of control, and have no noticeable damage done to them. More importantly, my kids love these figures and recognized them instantly, which is exactly what you want from a toy based on real-life people.

All and all, these are a well-done toy and would make a great addition or great start to any wrestling figure collection! If you like the concept of these action figures, but aren’t sure if your child is going to love The Rock vs. John Cena, you can also check out this complete list of the WWE Championship Showdown 2-Pack Action Figure sets here – since it has over 30 different choices! We also loved our Bobby Lashley vs. King Booker WWE Figure Set & Drew McIntyre vs. Goldberg Figure Set as well if you want a couple of other ideas.

Like we said above, these are not the most complicated toys out there – but they were really well-designed and are instantly recognizable – so I have zero complaints about them. They are always battling it out in my household, and my children have even incorporated them into some of the other action figure adventures that might be happening in our household.

I am only going to give them a Silver Star Grade because they are so basic – they don’t light up or make sounds – or do anything of that nature but are just very good action figures.

I think the only complaint kids would have would be if they didn’t have a wrestling ring for these figures to battle in. We did a review on the WWE Wrekkin’ Collision Cage Ring here if you need ideas for that.

If these WWE Wrestling Figures aren’t what you are looking for, here are some other figure set reviews we have done in the past:

Hopefully one of these Figure Sets will be what you are looking for!