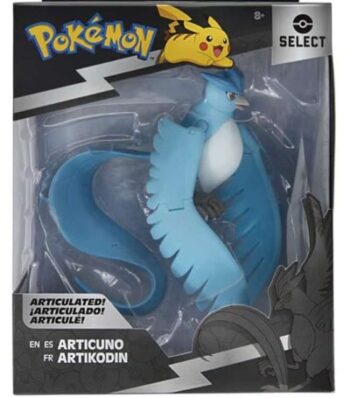 Sometimes you just get lucky when you are in the discount aisle at Target – and that happened to be the case when Target had put all of their Pokémon Select Series 1 Figures on extreme sale – and we just happened to be there to buy them!

It worked out great because it gave us a chance to purchase these really cool toys at a discounted rate – and they just happened to be perfect for our Pokémon loving children. They fit in really well with the rest of our Pokémon toys – and they are actually really cool to display!

So, we thought it would only be fair to share our thoughts on the Pokémon Select Series 1 Figures and give you a quick list of who is included in that group so you could see if they would be worth your time to purchase!

There are only 4-different figures in the Pokémon Select Series 1 Set which includes:

Let’s start with the basics – why are these called “Select Series” Pokémon figures and what makes them so different than just regular battle figures? For starters, these figures are much bigger – they are about 6-inches in size compared to the 2-inch size of most traditional battle figures (although there are some different size variations).

The second thing that makes these figures very different is they are designed to be displayed. For example, they all come with an easy to assemble plastic stand that you can connect to the Pokémon figure when not in use. This display stand attaches right to the back of the different Select Figures.

These figures can be removed from the display stand at any time to be played with. The Greninja figure is my oldest son’s favorite – he loves that it comes with two “ninja stars” and the movement/display stand makes it a lot of fun for him.

The hands and feet/legs both move, and the figure has been very durable. He did bust off a hand in a WWE Royal Rumble style battle that was a little intense – but a touch of glue reattached the hand without issue. I wouldn’t worry about the durability – this really was a rough battle.

My youngest son has a different favorite – he went with the Articuno. I can’t blame him, the wings on this figure can be moved to different positions and it has a large, flaring tail that looks awesome. You can see why this Legendary Pokémon would be a favorite to any kid – and it looks great on the plastic stand.

I was amazed that my children’s favorites didn’t include Charizard – who seems to be the favorite of every kid when I was growing up. This Charizard has the big wings that move, the fire covered tail, and the classic look that kids will love. It will be a terrific addition to any kid’s collection.

Last but definitely not least is the Rayquaza figure. This green dragon has a segmented body that changes positions. It has two arms and a big mouth that gives it a terrific look. I don’t see any reason why a child wouldn’t be thrilled with this Pokémon.

Final Thoughts on the Pokémon Select Series One Set

The Pokémon Select Series One Set features four terrific characters that children should love to add to their collection. The best part of this series is the characters, which are characters you don’t normally see in the regular battle figure packs!

When you add the cool plastic display stands and figures that have movement, you got a homerun combination. The durability is good, the looks are great, and both children that want to play with Pokémon figures and collectors that want cool Pokémon items to display are going to love the Pokémon Select Series Figures.

We would give them a gold star rating for sure and are glad we purchased these figures from the discount rack!

If you are interested in some of the other Pokémon toy reviews we have done, check out the following links:

Enjoy! And keep having fun.