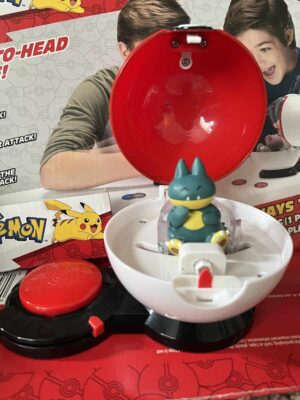 I feel like every parent in America for the past 25 years has had to go through a phase where all their kids want to do is play Pokémon, watch Pokémon, collect Pokémon cards, play Pokémon Videogames, and have their child’s life be completely controlled by Pokémon. With two young sons, I’m certainly in that situation currently!

So needless to say, I’ve purchased a lot of Pokémon toys that my children just absolutely had to have. One of those toys would be the Pokémon Surprise Attack Game. I fell victim to buying this toy because they saw a commercial for it on TV right before my son’s birthday – and of course he decided this was the toy he needed.

This Pokémon Surprise Attack Game Review should give parents an idea if this toy would be a good fit for their children, or if there would be better toy options in the endless sea of Pokémon merchandize that would be a better fit! We hope you enjoy our honest review and experiences with this game!

The good news is the Pokémon Suprise Attack Game is very simple, and even young children are going to be able to play this with no issues. The set comes with two plastic Pokeballs that are attached to a black base and have a big red button on them. The set I purchased has the standard red/white Poké ball that we all know, and an all-white premier ball. Depending on the set you buy, you might have a different style of Poké ball included, but they are all going to function the same and be the same 2 to 2 and 1/2 inches in height.

The set is also going to come with battle discs and two Pokémon that you get to battle with. The Pokémon figures are 2-inches in size, and there is a plastic clip inside the Pokeball that expands to hold the figure in place. ANY 2-inch battle figure will work in the set, so you can play with some of the other Pokémon figures you own (in fact, I’ve even seen my children sneak in Mario and Luigi from our Shaky Tower Game inside of the balls). Different sets will come with different figures. Ours was a Jigglypuff and Pickachu – but I’ve seen Squirtle vs. Jigglypuff, Charmander vs. Riolu, Pickachu vs. Bulbasaur – among others. I would purchase the set that includes your child’s favorite Pokémon, and remember, you can use figures you already own as well!

The game play is easy – you load the Pokémon that you are using into the ball and secure them with the plastic clip. There is a slot in front of the Pokémon where you load the battle disc mentioned above. The battle discs will vary by set, but you will normally have something like a grass, normal, and lighting attack. Once the figure and the disc are loaded, you shut the Poké ball and gently twist it until it locks in place. This is very simple to do – don’t worry about this being challenging at all for your child.

Once the Poké Ball is twisted and locked into place, you hit the big red button and it spins around and pops open – revealing your Pokémon and the attack you used. Based on which attack you used, you can win or score points – and there are different types of rules you can create or pick from. The description online even mentions playing with solo or training rules, Master or Junior rules – but that is honestly above my paygrade. Have some fun and let your children battle based on the rules they pick! There is a little score keeper on the black base you can move to keep track of wins if you would like.

That is basically it. Like we said, it isn’t very complicated. It doesn’t make any sounds or noises, doesn’t require any batteries, or extensive setup. You are basically going to be able to take it out of the box and play.

Our Experience with the Pokémon Suprise Attack Game

There isn’t really anything amazing for me to say about this game. My children will pick a couple of Pokémon and battle against each other for a little while, before moving on to something else. Now, part of that might be because they have short attention spans, but this hasn’t been a game that has kept their attention like they thought it would after they saw the commercial (the struggle with advertising is real).

I would say there are a lot of positives to the toy – like how easy it is to use, how easy it is to setup, and how you can use all the different 2-inch Pokémon figures with it. If you have a child that just loves Pokémon, loves the battling concept, has all the books so they can research Pokémon, loves to pretend to train Pokémon, wants to battle with you all of the time, has a good imagination, then they are going to absolutely love this toy.

If your children are like mine and love action and moving on to the next thing rather quickly, this toy does run the risk of being lost in the shuffle.

Final Thoughts and Grade on the Pokémon Suprise Attack Game

This is an interesting toy to grade. It isn’t bad by any means – but it isn’t nearly as popular as some of the other toys we own. I would say that my children do play with the Pokémon Battle Backpack Playset Toy more than this one, so if you are in doubt on what to buy, I would read that review as well to see some of the differences between the toys.

With all of that said, I’m going to give this toy our Silver Star Rating – but know based on your child – I could easily see this toy becoming a Gold Star Hit, or a Bronze Star spends a lot of time in the closet toy!

Thanks for reading and I hope you found our review of the Pokémon Suprise Attack Game helpful! If you are interested in some other great toys that we have reviewed, I would encourage you to check out some of the reviews below!

We will have some more great Pokémon Toy Reviews coming up soon!