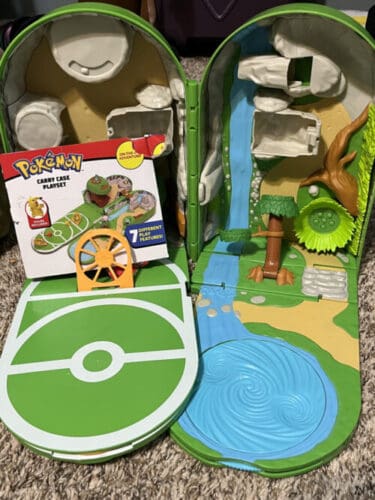 My sister was a huge Pokémon fan when I was growing up – and with an age difference of about six years I would watch the show sometimes with her but was nowhere near as into it as she was. She had Pokémon VHS tapes, Pokémon cards, and had that Pokémon jingle memorized.

I never imagined that 20ish years later my kids would love Pokémon just as much – if not more – than she did. It makes me wish I kept better track of my sister’s original Pokémon cards! I would say I’m even more of a Pokémon expert than her now since I have purchased Pokémon videogames, Pokémon Toys, Pokémon cards, and even have had Pokémon themed birthday parties for my children!

Let’s do a quick overview of the Pokémon Carry Case Playset. This playset is green in color and can be carried around like a backpack when it is closed up properly. There is a plastic latch on the outside that you just need to make sure is closed properly – and it has two straps on the back that can be adjusted to help with the fit. These straps aren’t crazy long – so older kids (10+ – maybe younger if your child is bigger) will probably not want to carry it around like a backpack!

To close the playset into backpack form all of the pieces inside need to be in the right spots, but this shouldn’t be too difficult for children to do by themselves after one or two times of doing it. The outside does have a white Pokéball on it and a blue strip for a little color – but otherwise it is a pretty ordinary looking backpack. When closed, it weights almost 2 pounds and is about 10 to 11-inches in length and about 6-inches wide at the thickest point. It is very easy for children to carry around.

This set does come with a 2-inch Pickachu figure. If you want to have big Pokémon battles, you will have to buy one of the many different figure sets that are out there – which is one of the downsides to this toy. Otherwise, you basically have a training ground for Pickachu.

Now for the fun part! Obviously, this playset is way more fun when it is opened, and you are ready for Pokémon battles! You will see on the cardboard wrapper on the playset that it has 7 different play features. The first is what looks like a Pokémon Stadium. It has two “launchers” (one tucks into the stadium floor when closed, so just make sure you pull it out when opened) where you can place Pokémon into them and launch them at each other. My sons and I enjoy selecting a team and taking turns launching them at each other to see who is victorious. This is a fun feature.

The second feature is a big tree with a trap door on top – flick the switch and your Pokémon will go tumbling down the slide and into the big front opening of the tree. The third feature is a hidden rock cave that has a little slider on top that will open and close it. I will warn, I’ve had to unstick this cave many times because my kids have gotten a Pokémon stuck (or they tried to hide 3 at a time inside). It isn’t normally difficult to do, but it can get annoying!

The fifth feature is a whirlpool looking water area that you can rotate with a spinner on the edge of the playset. I’m counting the sixth feature as the bridge you can setup on two rocks that connects one half of the playset to the other – which also happens to be a popular place for Pokémon to battle according to my youngest son. The seventh feature is a little tree that you can place Pokémon figures on – or at least I think that is the seventh feature…. I did list seven, didn’t I?

There aren’t any fancy noise making features or anything of that nature. This really is a playset that encourages imaginative play with a stadium, grass, rock, water, and forest area to battle in based on your favorite Pokémon!

But that is the basics of the Pokémon Carry Case Playset when opened and closed!

Our Opinion of the Pokémon Carry Case Playset

The Pokémon Carry Case Playset is a solid toy if your child loves Pokémon and loves to use their imagination. There aren’t any special sound effects or flashing lights that draw interest to this toy, so your child will have to be imaginative otherwise this probably won’t be the biggest hit in your toy collection!

The other downside is obviously that you will want to buy other Pokémon figures to go along with this battlefield. If you just rely on Pickachu it might be a little boring for children.

The upside is the toy does provide some cool features like trapdoors, caves, bridges, and a bunch of different terrains for Pokémon to battle on. It is also easy for children to figure out, seems to be durable, and doesn’t take up a lot of space! Plus, if you are like me and own way too many Pokémon action figures, this allows for an easy place to store them all!

Overall, if children love action figures, Pokémon, and using their imagination – this toy will be a big hit.

Final Grade and Review of the Pokémon Carry Case Playset

My children do love Pokémon, action figures, and have a pretty active imagination. And since we already owned 10 or more other Pokémon action figures, this playset has been a nice addition to our toy collection. I do also like the fact that they will sometimes have action figures that aren’t Pokémon battle on the Carry Case Playset, so it does have some flexibility in their minds! I really don’t have any regrets buying this toy as a birthday present for my oldest son!

I wouldn’t put this in the category of their favorite toys, and it is pretty basic – so we are going to give it an overall Silver Star Grade. But like we said above, if your child loves Pokémon and action figures – I wouldn’t be surprised if this toy ended up being even more popular in your house than it was in mine!

Believe it or not, my children do have some other interests besides Pokémon. So, if you are looking for some different toy ideas, I would encourage you to check out some of these other reviews that we did!

Hopefully those other links will help you find what you are looking for if it isn’t going to be the Pokémon Carry Case Playset!