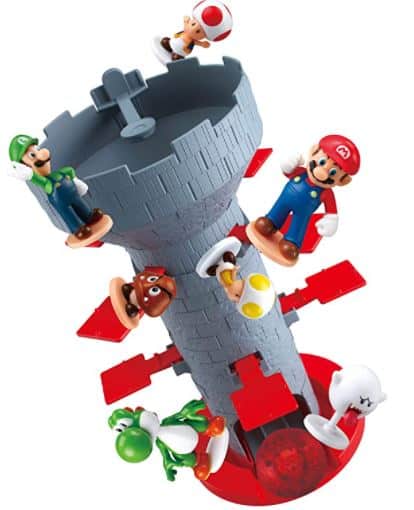 One of the Christmas/Holiday season traditions that my wife and I have is to buy each of our children at least one board game type of gift for Christmas. We are always looking for gifts that we can play together as a family!

So, here is our quick Super Mario Brothers Blow Up Shaky Tower Game Review plus our overall grade for the game, and our personal experiences we have had playing with it! If you had any questions about the Super Mario Shaky Tower Game, they will be answered by the end of this review!

The real nice thing about the Mario Brothers Shaky Tower Game is it’s not overly complicated. In fact, it was simple enough to put together that my 8-year-old did it by himself. Assembly is basically connecting a gray tower to a red base – and adding the 8 red platforms onto the tower in the proper way. Again, this is such a simple process even a young kid is going to be able to do it without issue.

Once the tower is setup, there is a heavy red ball with Bowser’s face on it that you place on a gray platform at the very top of the tower. That is how quick and easy the setup is! You are also going to have seven little figures – Mario, Luigi, Yoshi, Goomba, King Boo, a red Toad, and a Yellow Toad. These figures are what you use during gameplay!

The game itself is for 2+ players and is rated for ages 4+. I will say the gameplay on this game is VERY quick. You are talking about a minute or two for each round you are playing – maybe even quicker if you accidently bump the tower. This face-paced action is really good for my youngest son, and as a parent I like not investing a lot of time into a game only to have my son quit halfway through.

This is a balance game – so the goal of the game is to place figures onto the red platforms connected to the tower without knocking the big red Bowser ball off the top platform. Once the Bowser ball comes loose, it is going to knock down all of the figures you placed on the tower. Oh, and the red base of the tower is not flat – so it keeps the tower rocking back and forth making the game even more challenging!

The gameplay rules are this simple – setup the tower, roll the dice to determine how many figures you need to place onto the tower, and place the corresponding figures onto the tower. Don’t be the person to cause the ball to come crashing down, or you lose!

What is cool about these figures is they are different sizes and weights. It really teaches your children to pay attention to how the tower is leaning and where you should place a figure to try and balance it out. There are some cool cause and effect type principles your child will start learning without even knowing it!

Overall, we have had a lot of fun playing this game and it has been a nice addition to our collection!

Our Experience with the Blow Up Shaky Tower Game

The Epoch Games Super Mario Brothers Shaky Tower Game has been a lot of fun. Like we said above, even an 8-year-old can setup the game in no time and the rules are as easy to follow. You can play four or five quick rounds in just a few minutes which is perfect.

The game itself is also fun. We have spent a lot of time laughing when the tower comes crashing down and we are always joking about how hard it is to get the heavy Yoshi figure off the tower without wrecking it. As a parent, I was amazed at how much fun I’ve had playing this game as well. If a game gets everybody laughing, that is always a good sign!

Overall, we are going to give this game a silver star rating. I could easily see this being a gold star in a lot of households, but because it is so quick of a game (which can be both a positive and a negative) we are going to go silver star for now. However, when I do an update in a year from now or so, don’t be surprised if it gets a bump in the rankings.

Other Mario Brothers Toys and Board Games of Interest

If you are looking for something slightly different in the world of Mario Brothers Toys or Board Games, we probably have you covered by some of the past reviews we have done! Check out some of these other great toy reviews:

We have more that we could put on this list of reviews, but we figured this would be a pretty good place for you to start!

If you want to see this game in action, check out this quick video review!