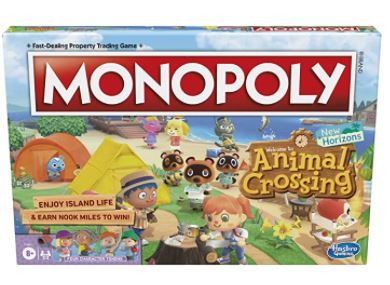 I am going to be honest on this one, Animal Crossing is not a video game that dad has played much. My knowledge of Animal Crossing is limited to the nonsensical descriptions of the video game I get from my boys and the knowledge gained from accidently overhearing some YouTube gamer play the game as my children watched him play.

So, why would my son really want the Animal Crossing Monopoly board game for his birthday? Mostly because his mom loves the game and has gotten those kids addicted to creating their Island and doing the things that you do while play Animal Crossing.

Needless to say, my son was thrilled to receive Animal Crossing Monopoly for his birthday – and I’ll be honest – I am actually having a pretty fun time playing this board game with him.

If you were in doubt about purchasing this game for your household or for a child you know, read this Animal Crossing Monopoly Review for an honest description of the game from someone who isn’t an Animal Crossing expert!

I think most of us are familiar with Monopoly and the arguments that the original board game creates – and I will tell you that Animal Crossing Monopoly is not that game. This version of Monopoly has some of the basic concepts of the original Monopoly game – but plays very differently!

Where to start when describing this game? First, you are going to pick a piece that is basically an Animal Crossing “character” which includes a boy fishing, a boy with his shovel ready to dig, a girl with a bug catching net, and a girl ready to go pick apples. And honestly, the character pieces look really nice! They are about an inch tall too!

The board is very different as well. Each “property” (property spaces are called islands in this game) color is actually only two spaces. For example, there are two orange “property” spaces in Animal Crossing Monopoly vs. the original Monopoly which has three orange spaces. This board also has lots of chance and “nook miles” spaces which we will explain shortly.

The concept of this game is also vastly different. In this version you go around collecting fish, butterfly, apple, and fossil pieces which you can sell back to the bank.

And in the world of Animal Crossing, they call their currency bells – so you trade in your tokens for “bells” which you can use to purchase home decorations. Each of these property spaces will have a pile of corresponding resource tiles placed on them, and you will take one tile when you land on that property/island space.

Here is a major difference if you were thinking you were getting into a traditional Monopoly game. In the Animal Crossing Version, when you land on a property space you put a token of your player/piece onto that space.

When an opponent lands on the space, they still get to collect a resource tile from that property, but the person who claimed/owned/discovered that property first also gets a resource tile. You aren’t charging players rent or money for landing on your spaces – but you are getting a resource tile that you can sell every time that land on your property.

So, what is the purpose of the game? The winner is going to be the player who collects the most “Nook Miles.” You collect Nook Miles by purchasing different decorations for your home – using the bells you collect while selling your resources.

We should also note that there are also four “skills” cards. Each player receives one of these special skills cards the first time they cross GO and can use that skill for the rest of the game. You do not trade these cards and you cannot have more than one.

You will also receive Nook Miles if you land on those Nook Miles Spaces mentioned above and you draw a card that gives you an opportunity to perform a task to receive those miles.

But beware, some of the cards you draw from those spaces make you pay and perform a task so you don’t LOSE Nook Miles! Some of these cards might also ask you to trade your resource tiles in for Nook Miles – meaning you might not want to sell them all right away!

Another big difference in this game is you are going to be rolling two dice. One dice is your standard 1-6, which tells you how many spaces to move. The other dice has a bug, fish, fossil, fruit, or leaf on it. When you roll this dice, you can sell your resource tiles to the bank based on what your roll.

This game does still have a just visiting and Go to Jail spaces – as well as free parking just like the original game. You get out of jail by paying 5 bells or by rolling a six. New to the Animal Crossing version is a Dodo Airlines space, which basically lets you land on whatever space you want between that airlines space and the next airlines space.

The game ends when someone buys SEVEN pieces of furniture for their home and all players have made it back to the Go space. The player that bought their seventh piece waits for the other players to get to the GO space – where the remaining players can buy some home furnishings, but no player can have more than seven decoration cards. The remaining players also do not go past the GO space – even if they have rolled a bigger number.

Once all players have reached GO you add up the Nook Miles on your decoration cards, on any Nook Miles Cards, and you subtract Nook Miles if you have any penalty cards. The winner is the person with the most Nook Miles after that math has been done!

Our Experience with Animal Crossing Monopoly

Having no experience with Animal Crossing, I was expecting more of an actual Monopoly Game. However, I was pleasantly surprised to see how Monopoly incorporated Animal Crossing into the game – but still kept some of the basic principles of Monopoly.

My boys were thrilled with the game. They loved being able to trade resources and buy home furnishings. The game was easy for them to follow and easy for them to play. It did take us about an hour for 3 of us to finish – which might be because we are slow. The gameplay wasn’t so long that my son’s got bored – which was great.

And honestly, I didn’t mind that it wasn’t a traditional Monopoly game. The Animal Crossing theme was done in a way that should make it a lot of fun for everybody – even someone who isn’t familiar with Animal Crossing. But for those who love the video game – I think they are going to love this board game!

We are going to give it a Gold Star Rating for right now!

Other Board Games of Interest

As you are probably aware by now we love board games in our house. If you are looking for something a little different than Animal Crossing Monopoly, here are some great board games we have enjoyed!

Between those games, I’m hoping you can find a fun game to play!

Or if video games like Animal Crossing are your type of thing, Uncle Shane plays these a lot more than I do and writes about games like Stardew Valley over at his gaming group website.