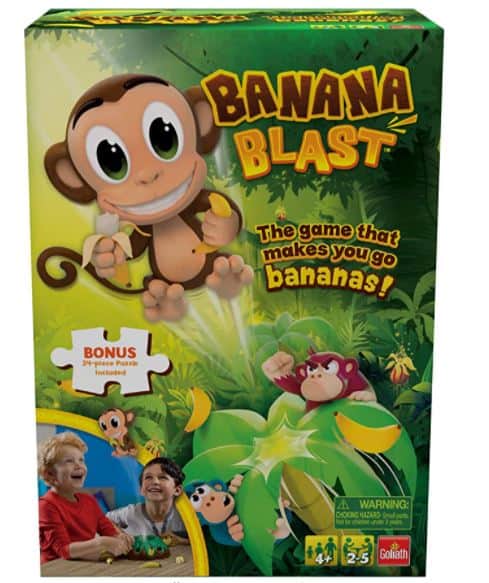 Another board game that we ended up buying because my children watch to many TV commercials would be the Banana Blast (Monkey and Banana Kid’s Game) Board Game.

I would say that most commercials make these games look a lot more fun than they actually are – but there are some redeeming qualities to this one that does make it fun to play.

We are here to give you the inside scoop on Banana Blast, to highlight the games strong points and low points, and to give you an all-around review of the game in general.

The basic rules and gameplay for Banana Blast is going to take about 30 seconds to explain. You have a round game board with 13 bananas sticking out of it. In the center of the board is a smiling monkey. It also comes with one die.

The person with the most bananas at the end of the game is the winner.

This game is rated for children ages 4+ and is for 2 – 5 players according to the rules.

The Positives and Negatives of Banana Blast

This has been a game we have played for a few years in our house, and it has some strong points and some not-so-great points.

The strong points: kids absolutely love trying to catch the monkey. I haven’t met a single kid yet that hasn’t gotten excited when it pops, and everyone tries to catch it. Pure enjoyment.

Game play is quick. We are talking a round of this game can be done in under a minute. Sometimes the monkey pops after 5 bananas have been pulled, sometimes after 11 – but the gameplay is quick. It is hard to get bored with how fast the game moves.

Banana Blast is also super easy to play. My three-year-old was playing it with no problem – roll the dice, grab a banana, and try to catch a monkey. Simple.

Not-So-Great Points: Game play is quick. The box says it is for 2 – 5 players, there are some rounds you might not even get to that fifth player – that can be frustrating for kids too. I really say this is more like a 3-player game at most. That quick game play also makes it hard to be a family game night game.

Final Thoughts and Our Grade

Our kids have enjoyed playing Banana Blast – and they usually play it for four or five rounds at a time – mostly because they love trying to catch that monkey. It amazing to see them still surprised it popped out with a loud noise when it has just happened over and over again.

We play a lot of different board games in our household, so we would encourage you to check out some of these links on other board games we have reviewed.

These games are going to be a lot of fun for you and the family!