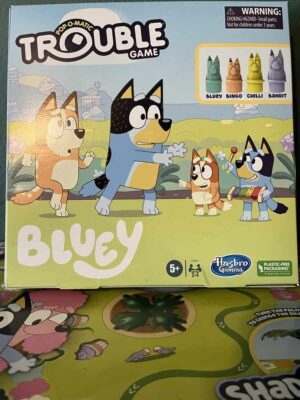 If you have read this site before, you know how popular Bluey is in this household! When we aren’t watching Bluey, it seems like we are playing with Bluey Toys and Bluey Games – and my children are normally trying to convince me to play the games they see on the show as well!

I don’t think we are very different than most households with young children in that regard, so we are always on the lookout for new Bluey Games, and we just happened to see that there was a Bluey Trouble Game released! My wife knew we had to pick that one up, and we have been playing that ever since!

We hope you enjoy our Bluey Trouble Game Review, and I bet you are going to enjoy adding it to your board game collection – especially if you have children that are fans of the show.

I think most of us are familiar with the board game trouble since it was created in 1965 making it almost 60 years old. There are going to be a lot of similar rules to the Trouble we all know and love, with a couple of slight variations in the Bluey Trouble Game Version.

The basics are the same, the game is for up to four players. You get to play as Bluey, Bingo, Bandit, or Chilli – and the point of the game is to get all four of your pieces from home to the finish zone before everybody else. If you land on the same space as your opponent, you send the opponent back home.

You get to take turns hitting the pop-o-matic in the middle and move the appropriate number of spots. If you get a 1, you lose your tun and everyone gets to move a piece out of their starting area. If your get a six, you can move a piece out of your home area and take another turn. Keep doing this until someone gets all four of their pieces to the finish zone – simple right!

The difference between this and other Trouble versions is some of the different spots you can land on. There is a Scooter space that if you land on allows you to take another turn. The only rule is if you roll a six and land on a Scooter space you only get to take one extra turn instead of two.

There isn’t anything over the top complicated with these extra spaces, but it does give the game a fun little twist.

Final Thoughts and Grade for the Bluey Trouble Game

The nice thing about this Bluey Trouble Game is that it is rated for children ages 5+, but the rules are so simple that younger children are going to be able to play it with an adult or older sibling with no problems at all.

I think the board itself is designed nicely, the Pop-o-Matic contains the die, so you don’t have to worry about losing it. I don’t think the pieces are designed all that great – but my children don’t seem to mind. If you are playing the game with 2 or 3 players it doesn’t take too much time to finish, but I’ve seen a four-player battle take over half an hour!

And, like we said above the extra spaces bring an extra level of enjoyment to the game. Overall, this is a fun, quick, and easy game we can play as a family. There isn’t anything over the top special, but any Bluey fan that loves to play board games should enjoy playing it! We are going to give it a silver star rating.

Other Bluey Toy Links of Interest

I’m not sure who enjoys Bluey more in my household – my wife and I or the kids, but either way we have a lot of Bluey Merchandize in the home because of it! Check out some of these other Bluey Toy Reviews we have done!

If you are looking for some fun Games/Board games that aren’t Bluey Themed – check out these reviews: