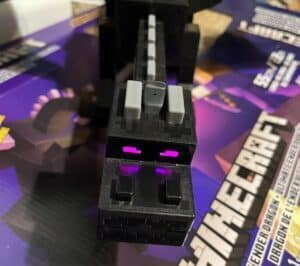 I remember when I first bought my X-Box One many years ago it came with Minecraft. It was never a game I played and honestly, never have had much interest in playing. Like most parents will tell you that have kids my age – somehow kids will find out about that game, become obsessed with that game, and talk about Minecraft all day long!

That is basically what happened in my house and is why we have Minecraft the game – and so many Minecraft toys. And I will honestly tell you, my favorite Minecraft toy that we have ever bought is the Minecraft Ultimate Ender Dragon Toy. This ended up being a gift for my youngest son’s birthday and it turned out being his favorite toy he got that year!

So, we thought it would be a great idea to let you read our Minecraft Ultimate Ender Dragon Review so we could tell you why you are going to want to add this toy to your toy collection if your house is as Minecraft obsessed as mine!

The Minecraft Ultimate Ender Dragon Toy is from Mattel and comes with a giant Ender Dragon and Steve Figure (that also comes with a few accessories). Starting with the Steve figure, it is about 3.5-inches in size, comes with a bow, an arrow, and a pumpkin helmet. Steve can hold the bow & arrow and wear the helmet. Steve’s arms move up and down – so the figure isn’t completely static.

One of the other things that is really neat about the Steve figure is that it will change colors. The chest plate is normally white, but when it gets hit with the steam (we will get to that in a second) from the dragon or is in water the chest plate will change to a red color. It is just a fun little detail that makes the toy fun!

Steve is cool, but the Ender Dragon is way cooler and the reason why this toy has been so popular in my house. The Dragon is big – about 22-inches long – with big wings and some very cool details. It has a sharp black and gray color scheme look to it – with that block like appearance you would expect from a Minecraft toy. It also has these glowing looking eyes that are cool too!

The wing flap which adds the flying effect you would want in a large toy dragon. All four legs of the dragon move as does the tail. You will also find four different gray buttons on the back of the dragon which are the key to the coolest features this toy has!

The coolest feature of the Ultimate Ender Dragon Toy is its ability to blow steam! This made my youngest son super excited when he did it for the first time. How this works is the dragon has a little hole on top of its head that you can fill with a little bit of water. There is a little rubber piece that you cover/uncover the hole with that keeps the water from spilling – and there is a little tool the toy comes with it that helps you fill it with water.

Once the dragon is filled with water, there is a gray button on its back that you hit and opens the mouth plus shoots out the steam! It is really slick! The other buttons on its back will open the mouth of the dragon and make noises as well – giving it that full Ender Dragon themed effect.

The process of filling up the dragon with water is very simple, and it won’t take long for your young child to be able to do it themselves. And with the little tool, they shouldn’t get water all over the place!

Overall, this toy is awesome. The size, sounds, effects, accessories, and Steve action figure all make this a homerun Minecraft themed toy.

Our Final Thoughts and Grade for the Ender Dragon Toy

If you couldn’t tell reading through our Quick Ender Dragon Toy Review Section – we love this toy! It has been a homerun in our household, and not only does the Ender Dragon terrorize Steve and other Minecraft toys, but he terrorizes just about every other toy my son owns!

The buttons are easy to use, the wings and mouth make playing with the toy a lot of fun – but it is the steam feature that blows his mind and makes this one of his favorite toys. The steam is nice and cool – and it is so easy for him to load up the Ender Dragon for its next battle all by himself.

I can honestly say all the kids he has had over love this toy – and even a few adults have commented on how they wish they had something so cool back when they were kids!

This was a very easy Gold Star ranking – and I might even call this the best DRAGON toy I’ve ever seen regardless of being a Minecraft themed toy!

Hopefully, you had as much fun reading this Minecraft Ultimate Ender Dragon Toy review as we did writing it! However, if this wasn’t exactly the toy you were looking for, here are some other fun toy reviews we have done in the past!

I would think that one of these fun toys would be just what the Dr. ordered!