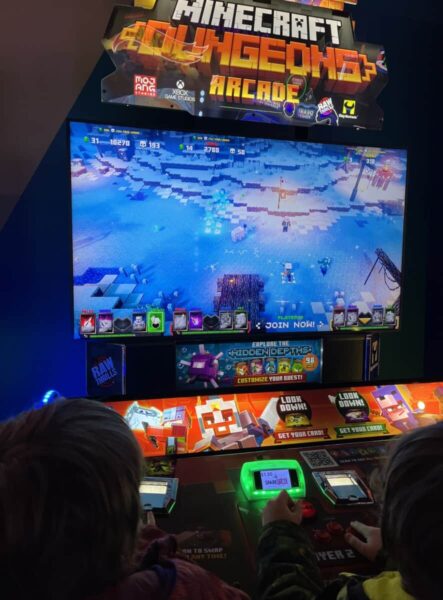 I’m clearly not in the loop like I used to be when it comes to video games. I knew what Minecraft was, and my X-box One even came with a copy when I bought it. So, I was a little surprised and wasn’t sure what my kid was talking about when he kept talking about Minecraft Dungeons (thank you video game streamers for convincing my son he needed this as well).

To help other parents out as well, check out this list of the best Minecraft Dungeons Figure Sets, and hopefully that will give you some ideas of what your child might be looking for!

Here is our complete list of the Best Minecraft Dungeons Figure Sets. Below this quick list is a little picture and very quick review of each option.

1.) Minecraft Explorer vs. Whisperer – The Explorer figure of this set is based after the Jungle Explorer Hero found in the Jungle Awakens Downloadable Content pack in Minecraft Dungeons. He looks just like the character in the game with his bow and staff, is 3.25-inches and size, and has moveable joints to give you that realistic playtime experience.

The Whisperer is slightly taller and thicker than the Minecraft Explorer – and has an awesome look to it that kids are going to enjoy! Kids are going to have a lot of fun battling these two characters over and over again!

The Nameless one is the Necromancer Skeleton who is a boss in some of the different levels of the game. His figure is slightly larger than Hal, and also includes his staff. Hal has his bow, and you should be able to create some fun epic battles between these two characters!

3.) Minecraft Dungeons Redstone Golem & Arch Illager – If you are looking for an impressive enemy for your child to battle, take a look at the Redstone Golem that appears in this 2-piece figure set! The Redstone Golem is the boss of the Redstone Mine level and makes some appearances as a mini-boss towards the end of this game. This figure is BIG compared to the other figures in most of these sets!

On the opposite end of the size spectrum is the Arch Illager – who is the first main enemy of the game. He has a block to stand on, so he looks a little taller, and he has his staff to cause problems with. Overall, this is a fun Minecraft Dungeons Village Pack.

The Dungeon’s Stax figure is also really cool with a Blue Scythe that is an awesome accessory. Overall, this is a fun two pack that would be a good addition to your Minecraft toy collection.

To go with the Redstone Monstrosity is a miniature fighter figure – can they pull off the David vs. Goliath level upset and take down the big guy? Not in my household, but maybe you will have better luck with the underdog story.

The very first boss that beginning Minecraft Dungeon players will have to face is an Evoker – who is known for summoning other enemies and traps. This Evoker has a miniature enemy figure that he summoned – and this figure can even carry a miniature sword. The little details like this are what makes this figure set a fun choice!

7.) Minecraft Dungeons Desert Temple Battle Pack – The Minecraft Dungeons Desert Temple Battle Pack is harder to find than it used to be but is a great buy if you can find it. This set features four different figures instead of the standard 1 or 2 – with Hex and Valarie figures representing 2 of the main heroes of the game. They also are armed with their sword and giant hammer meaning they are ready to battle –

The Evoker and Skeleton villain figures that are included in this set! The skeleton has a bow and arrow, the Evoker a spell book, and it makes for some fun battle opportunities. Who doesn’t want four figures instead of one or two?

That cool stuff includes a battle chest, a sword, and a set of Reinforced Mail that goes right onto the Hex Figure. If Hex’s regular armor isn’t cutting it in battle anymore, you might as well go with the Reinforced Mail!

The fox armor can be found in various missions that take place in Minecraft Dungeons – and it has a cool look and an interesting backstory. Apparently ancient villager tribes created this armor to honor the fox because they thought it was an agile warrior. That is a fun backstory for a fun Minecraft Dungeons figure set!

Besides the great look, this figure also has “smashing” arm action – where you are able to lift the arms and they will come smashing down. The head and legs can also rotate on this figure, making it one of the best options you can find if you want a villain for your hero action figures to battle!

If you weren’t aware, a Geomancer is an older Illager that can be found in different missions in Minecraft dungeons. This figure set includes the 3.25-inch Geomancer figure, the staff they use to summon bad guys, and the Geomancer Wall figure (the standing stone with the Creeper face on it). All of those pieces together make for a pretty cool figure set that kids will enjoy having adventures with.

For example, Adriene can stay in her standard look, but you can also put her in the extra armor set that is included. It also includes a sword and a “blue” flame – which my sons refer to as the ice flame. This flame can be attached to the sword to ensure that skeleton is going to lose the battle!

This figure represents her pink hair and looks just like she does in the game. This set features three different accessories – including her sword and a lightning bolt that you can attach to the sword to create all sorts of damage to your enemies! Just like the other figures, the joints move, and the figure is well designed, so it should be a lot of fun for you to play with!

This figure captures that bald, old man look. He also comes with a blue potion bottle, a green flame, and a sword/staff weapon. It has the handle in the middle and a blade on both sides of the handle. The green flame can be attached to one of the blades and creates a bad guy busting weapon. I can think of a lot of people that would love to have this figure!

Enchanters are a very recognizable character that you often get to battle in the game – and this figure does a great job capturing the “Magician” Hat and Robe that these enemies wear. This action figure also comes with his tomb that they use in the game to try and defeat you – so watch out of the magical powers of your Enchanter enemy!

This figure is also going to have a big battle axe, which is just a cool weapon to have, a long flame that can attach to the axe, and a heart potion. So, if you need an extra hero for your figure collection, or you just need to complete your collection – the Minecraft Dungeons Greta Action Figure will make a great addition!

Valorie is dressed in her very recognizable red and blue armor, and this set also includes her long sword (which every good treasure hunter is going to need). Included in this set is also a large flame that can be attached to the sword. If you want to have all the best Minecraft Dungeons Heroes, you got to have this Valorie figure!

This set also comes with two swords, and a really cool flame that can be attached to one of the swords to create a flaming sword. That would come in handy when you are battling some of the enemies from above!

Besides being dressed in really cool black armor, these Royal Guard figures are come with their big shield and mace. The armor, shield, and mace really make this figure look cool, and this was one of the figures I thought looked the best!

Jade comes with her wizard staff (what else would a philosopher use to fight) that also has a big flame that you can place on it. She will be a great addition to those armies of skeletons you are trying to fight!

Hal is also carrying his battle axe, a potion, and a green flame that can attach to the axe. All of these accessories really add to his ready to battle look, and you should have a lot of fun battling with Hal!

These skeleton figures are wearing their armor, a desert shield, and a long-handled blade that is ready to inflict some damage. There is also a little flame that can be attached to their blade to make them look even more vicious. Overall, you are going to enjoy having your heroes battle these good-looking skeleton warriors.

This figure has a classic black armor look to them that good enemies tend to wear. He is also armed with a big battle axe, which you know can cause some damage. This Minecraft Dungeons Armored Vindicator would look good in that group of enemies that your heroes are trying to destroy!

This figure looks just like the character in the game – it is a pig with a treasure chest that can be attached to its back. There is a saddle that attaches to the big, which allows you to put the chest onto it. You can also have the chest be just a treasure chest and the pig be…well, just a pig.

If you are looking for some other Minecraft Toys or Minecraft Gift ideas, check out these other reviews we did!

Hopefully these reviews will help you find the Minecraft toys you are looking for!