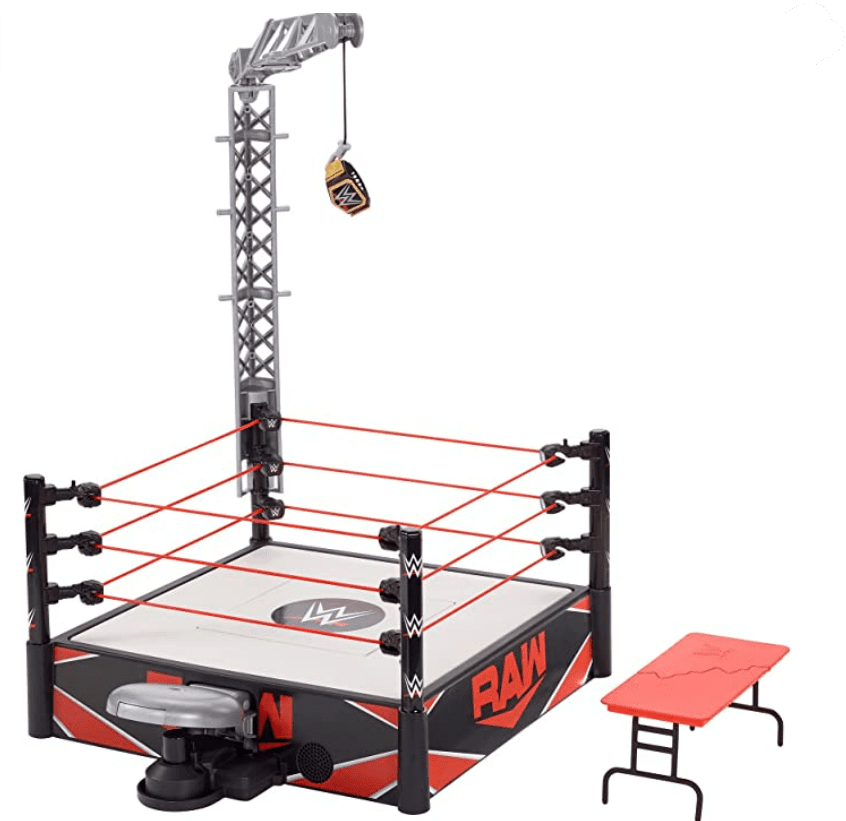 If you know anything about the WWE, you know they are phenomenal at coming up with different merchandise lines. It can be very difficult to keep track of all the different lines of action figures and toys they have going!

One of the more unique lines of toys would be the WWE Wrekkin’ Toy line. These toys are very different from a lot of the standard rings and action figures they sell. These are called the Wrekkin’ line because they have pieces that “breakaway” or they do things that cause destruction – basically this is the chaos causing toy line in the WWE world!

So, if you are looking for something a little different than your traditional action figure sets, here is a list of the Best WWE Wrekkin’ toys, with a great description about each one letting you know why they are so unique!

Here is a quick list of the best WWE Wrekkin’ toys. For a more in-depth review and a picture of each toy, keep reading the section below this list! By the end of this article, you should know if these toys would be a great addition to your collection!

1.) WWE Wrekkin’ Kickout Ring – The bread and butter of good wrestling toys is always going to be a good Wrestling Ring, and that is where the WWE Wrekkin’ Knockout Ring comes into play! The ring is a 13-inch by 13-inch square that has turnbuckles and ropes – and it a great platform for a wrestling match!

This ring also comes with a giant crane which attaches to one of the corner turnbuckles, and basically makes the ring to the top of the crane about 20-inches high (which can also break away). Included is a WWE Championship belt that can be hung from the crane, and a breakaway table that can be used to make this a table championship match!

Now here are the kickers, the ring actually makes 26 different noises and phrases – but also has two different modes you can play in. One mode is referee mode, where you can a wrestler pinning another wrestler in the middle of the ring, and you slam the bell attached to the ring. The bell will either allow for a wrestler to kickout of the pin attempt, or it won’t – making your matches have some unpredictability to them! My kids think this feature is awesome, and they love hoping their favorite superstar will kickout at the two count.

The other mode is equally as fun, but way more unpredictable and destructive! The other mode is launcher mode. Basically, when you slam the bell this time, you are going to send the wrestler in the center of the ring flying towards the championship belt or outside the ring! Who doesn’t enjoy sending a wrestler or two flying.

This toys ability to keep wrestling matches fresh and fun is why we have to rank it number one, but there are some other really fun toy options as well!

2.) WWE Wrekkin’ Ramage Rig – I think the biggest and coolest of the WWE themed Wrekkin’ Vehicle toys would be the WWE Wrekkin’ Ramage Rig! This is a rig has six tires that move and lets you drive it around and a seven-inch crane attached to the back! This crane has full 360-degree motion, and has a big ball attached to the end of it. That ball is perfect for smashing different superstars or for putting the included championship belt into!

This Rig includes 11 different break-away pieces – so you can cause all sorts of destruction smashing into things, having out of control wrestling matches, or doing whatever else your imagination can think of. Also, if you press the engine block that is under the hood of the truck, it will launch figures off of the truck – one of those hidden features of these toys.

This set doesn’t come with any WWE Superstar figures, but any of the 6-inch figures will work nicely with this set. There are also some WWE Wrekkin’ Figures that will be a really good addition to this toy listed in the #4 slot!

The toy is really simple to put together, the steel cage connects right to the ring posts and is actually very sturdy. The steel cage has a big door, but also multiple spots that will break away – allowing you to throw your opponent right through the cage. The ring is also spring loaded, so you can get your opponents to bounce really well.

I will also say this has been one of the favorite toys in our household, so you can read about our experiences with the WWE Wrekkin’ Collision Cage here.

These action figures are going to be about six inches in size, look just like the superstar they are supposed to be representing, and are going to have some type of pullback action that will punch, or body slam their opponent. Included in these sets are also some type of accessory that can be broken and rebuilt to add some destruction into the match!

Here are some of the more popular WWE Wrekkin’ Action Figures choices:

These are some of the best options, but there are a lot of other great options available as well – so don’t be afraid to look around!

If your kids are like mine, they always have the urge to take the wrestling match out of the ring. And that is the great thing about this set. There are three different areas they can battle in – they can start in the ring, move to the gym, or fight high up on the scaffolding!

Kids will love having their action figures working out at the gym, only to have a crazy battle to break out – and this ring has some fun options when it comes to causing mayhem.

This Wrekkin’ Slambulance can be pushed around like a toy ambulance, and it has 8-different pieces that “break” off. Those pieces include the hood, doors, bumper, side panel, and light panel. There is a big side panel that comes off the ambulance revealing the back area/stretcher area.

There is a button hidden under the hood of the ambulance that will shoot out the stretcher as well. This is a spring-loaded feature that will launch the stretcher right out the back – and it is a great way to end a match!

7.) WWE Wrekkin’ Figure Vehicles – I’ve lumped the WWE Wrekkin’ Figure Vehicles that feature a WWE superstar with them into one category. Basically, these sets will feature a vehicle of some sorts, a 6-inch WWE Superstar figure, and 6-8 pieces that will break off the vehicle to cause all sorts of mayhem. Most of these vehicles also have some sort of “trick” or special feature they do as well.

Other WWE Action figures will also fit onto these vehicles, but it is really nice how they include one figure with each set. Here are some of the options available currently:

These WWE Wrekkin’ toys should be a great addition to any WWE Wrestling toy collection – but if you are looking for some other WWE toy options, check out these links –