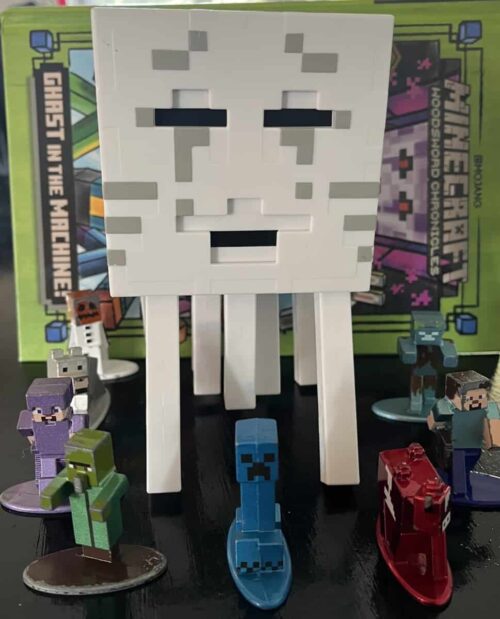 Shopping for different figure sets can be a really difficult task on different shopping sites – especially if you are shopping for figure sets that have a lot of choices or release options in different waves. That is why we created this complete list of the Jada Toys Minecraft Figure Sets, because they release different waves at different times and because we want you to have a list of very dependable, very durable, high-quality Minecraft figures to pick from.

All of these Jada Toys Minecraft Figure Sets will be made of durable cast metal materials and metallic paint that does an amazing job of giving these characters the Minecraft look you would expect. You will also be able to play with these figures for years – I know my kids have!

Here is a complete list of these Minecraft Figure Sets – with details of what is included in each one below!

Here is a quick list of all the Jada Toys Minecraft Figure Sets. Beneath this list is more detailed information on each set – including which figures are included.

1.) Jada Toys Minecraft Figure Set Wave 1 – I’m glad that the Jada Toys Minecraft Figures set was met with enough popularity that decided to release many more waves after this one! It is a 20-piece set that has a great combination of characters, enemies, and villagers – and is still very collectible today! The high-quality look and durability of these figures keep children coming back to collect more!

2.) Jada Toys Minecraft Figure Set Wave 2 – The second wave was a 20-figure set that includes a nice mixture of animals, characters, and monsters. These figures were still made with the high-quality cast metal and metallic paints that we came to expect after the release of set one.

4.) Jada Toys Minecraft Dungeons Figure Set Wave 4 – Wave 4 was a little different than some of the past releases – with these series having a Minecraft Dungeons theme to it. They may be Dungeon themed – but they are still about 1.65-inches in size, look great, and will last a long time because of the high-quality materials used to create them!

6.) Jada Toys Minecraft Figure Set Wave 6 – Wave six was another group of 20 different figures standing around 1.65-inches in size. This set included a lot of animals compared to some of the other sets but includes some really good characters that should be popular with Minecraft fans!

The 18 figures included in this set are – Steve with an Iron Pickaxe, Alex with Enchanted Sword, Creeper, Pillager, Wandering Trader, Brown Trader Llama, Glow Squid, Gold Axolotl, Pink Axolotl, Goat, Baby Goat, Fox, Cow, Chicken, Brown Sheep, Black Cat, Zombie, and Skeleton. The Axolotls are what got my kid’s the most excited about this set!

These awesome Minecraft Figure Sets should bring a lot of enjoyment to the toy collection of a Minecraft fan. If you are looking for something slightly different then these options, check out some of the following links:

These different reviews should give you all sorts of good toy options!