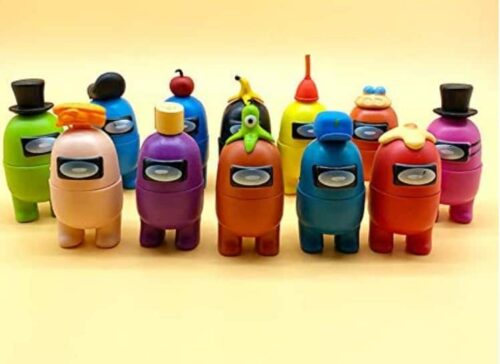 I probably should have written this review about the Among Us Figure Set we bought about a year ago, but I’m sometimes slow to get these things done. My kids, just like everyone else’s, went crazy for Among Us when it first came out. Obsessed might even be a better way to describe it.

So, it came as no surprise that my son wanted Among Us toys, an Among Us birthday party, and even an Among Us Halloween costume. The strange thing was, there wasn’t a lot of Among Us toys available (there are a lot more available now). Which left us doing something we don’t normally do, buying an Among Us Figure set off of Amazon.com that we weren’t sure if we should trust.

And it turned out to be an awesome buy. These Among Us Figures are still a very popular toy in our household, and we were actually impressed with the design, durability, and even the bright colors. It turned out the gamble was well worth it, so we wanted to share our experience and thoughts about this toy in this Among Us Figures Set review.

Like we said above, we bought this Among Us Figure set on Amazon.com, and you can find the link here: Best Among Us Figure Set. We got nervous buying this set because it didn’t seem like an official Among Us toy – and I think we have all been tricked by shopping sites a time or two.

However, this ended up being a great purchase. There were 12 figures in a set, and we ended up buying two sets (one for each kid). Each figure is a different color, and each set came with 12-different hat styles. Our set came with a black Among Us draw-string bag as well to store everything in, but I can’t promise they will send that with your set now.

Each of the figures are about 3.5-inches tall and made from a strong plastic material. I was actually amazed at how well made they were and how durable they have been. They have been crushed, thrown, left outside, played with in the bathtub, and have shown no signs of wear and tear. I am still impressed to this day.

Each of the Among Us figure can be pulled into two pieces to reveal the classic bone sticking up that shows they have been murdered in the Video Game. This “bone” piece can be taken out of the figure as well. The tops, bottoms, hats, and bone part of each figure can be mixed and matched – so you can have a fun half red, half blue Among Us dude running around! My kids loved being able to mix and match all of the different colored characters to create their own characters.

Each character does come with a funny hat ranging from a plunger (my child’s personal favorite) to a banana peel, and even a regular ball cap. Each character has a little hole in the head area that allows the hats to be placed, and they actually do a nice job of staying on.

The way the characters are designed to mix and match, plus how they are able to be “murdered” allows for a ton of imaginative play. My kids have combined these toys into other play sets, built giant farms, even created a big Among Us spaceship out of cardboard to create different worlds to play with these characters in. It was funny how I would kick our kids off of video games, and they would play with their toys to create the video game world they loved so much.

Overall, these toys are awesome and I’m very glad we purchased this Among Us Figure Set.

Final Thoughts on this Among Us Figures Set

And my children love them. They encourage a ton of imagination time and have been through countless adventures. I can honestly say this Among Us Figure set has surprised me more than any other toy I have bought. Maybe it was my low expectations going into it, but I’ve been amazed at how my kids have responded to owning them. This is a gold star toy all the way.

I hope you give this Among Us Figure set a chance so you can see why we called it the Best Among Us Figure Set. If you are looking for some other gift or toy ideas, check out some of these reviews we have done in the past.

All of these video game toy reviews make me think my kids like video games to much!