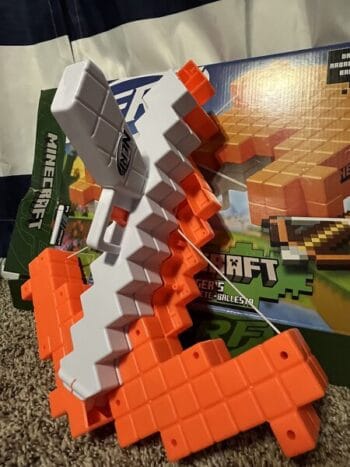 When you have two active boys that love video games and NERF weapons, there is a really good chance that you are going to end up owning the NERF Minecraft Pillager’s Crossbow. We knew we were going to end up buying this toy as soon as my youngest son saw it at the store, and that is what ended up happening!

This Minecraft Crossbow toy became one of the gifts my son got at his 6th birthday party and has been a staple to his toy collection ever since. He has fought many battles against his brother, make believe enemies, and neighborhood kids while wielding his trusted NERF Crossbow.

We thought it would be fun to share our opinion of this toy. So here it is, the NERF Minecraft Pillager’s Crossbow Reviewed!

Starting with the basics, the NERF Minecraft Pillager’s Crossbow is rated for children ages 8+ (I know, we bought it for a 6-year-old, and we don’t regret our decision). It does require some slight assembly – which is basically snapping a couple of pieces into place and making sure you have the crossbow string in the right place. It will take you about 15-seconds to complete.

The top piece is orange in color and the bottom piece is white – and it has an awesome blocky look that is required from a good Minecraft toy. It is inspired by the crossbow in the video game after all, and it does look terrific.

Besides the pieces you assemble to create the crossbow, this NERF weapon does come with three darts. There are three slots on the crossbow that you load NERF darts into – it’s like they gave you three darts for a reason, but knowing kids, you are going to want to have some spares. This will shoot any type of NERF dart, even the knockoff ones, but the three darts it comes with are the “elite” style and work really well.

Once assembled, there is a primer lever you are going to pull back to “prime” the crossbow. Once primed, you pull the trigger and the dart blasts out. You don’t have to switch which chamber you loaded the darts into – keep pulling, priming, and shooting until you blast thru all three darts. Children will have no issue pulling back the primer lever, it is very easy to do.

I will tell you this crossbow shoots those darts with some force! This is one of the strongest/best shooting NERF weapons I’ve ever played with. The darts are very accurate – and my youngest might get a little timid from time to time after being blasted with the Minecraft crossbow. No real injuries have every occurred, but there is some force.

Overall, this is a really fun Minecraft themed NERF weapon, and one that should be enjoyed by Minecraft fans and NERF fans. We would strongly recommend it.

Our Final Thoughts and Grade for the NERF Minecraft Crossbow

We really like the NERF Minecraft Crossbow in our household. I love how the easy it was to assemble, I love how it looks like it belongs in the Minecraft video game, and I love how much power and accuracy this NERF weapon shoots with.

And like we mentioned above – this is one of the most accurate and powerful NERF weapons I’ve ever played with. We love have shooting competitions with it, and the pull back of the crossbow is very easy – so I don’t have to worry about my child needing me to load it and get it ready to shoot.

Overall, I’ll give this a Gold Star Rating and would easily recommend this to be added to any child’s NERF or Minecraft collection.

Hopefully you have enjoyed this review of the Minecraft NERF Crossbow! If you are looking for some other really cool Video Game based toys and games, check out the list of reviews we did below!

Wow! Between all of those video game toys we hope you can find something you enjoy.