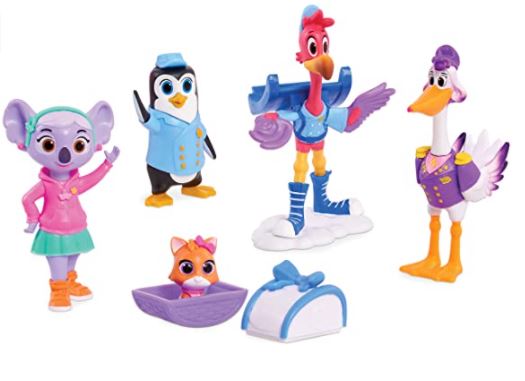 Every once in a while, I will be surprised by some of the TV shows that my children love. One that really surprised me was T.O.T.S. on Disney Jr. – but my youngest absolutely fell in love with it and it quickly became the TV show he always requested.

The TV show is basically about two delivery birds (a penguin and a flamingo…surrounded by storks) who delivery different baby animals to their parents and learn valuable lessons along the way. Exactly what you would expect from a Disney Jr. TV show.

Because he loved the show so much, we had to go out and buy him the Disney Junior TOTS Figure Set, and he has been playing with the figures ever since. Here is our T.O.T.S Toys T.O.T.S Figure Set review so you can see what this toy is all about and how much fun we have had with them!

This T.O.T.S. (which stands for the Tiny Ones Transportation Service) Disney Jr. Figure Set comes with 5 figures and a delivery crate. The delivery crate opens up and fits on the back of Freddy the Flamingo.

The figures are for Pip the Penguin, Freddy, KC, Captain Beakman, and Mia the kitten and daughter of Captain Beakman. Mia does fit into the previously talked about crate and can be delivered by Pip and Freddy. Or you can be like my kids and find all sorts of other toys that fit inside the crate.

These toys look just like the characters from the show, and they are very vibrantly colored. They look great. There is one downside to these figures – they are locked into their poises. They don’t have arms and legs that move, so what they look like is what you get.

They don’t make any sounds or do anything special – so they really are just a great representation of the characters from the show and will really be used for imaginative playtime.

These TOTS Toy Figures are recommended for children ages 3+. The taller figures are about 3-inches tall, but they all vary in height based on their character in the TV show.

These figures are a solid toy that my youngest son really enjoys playing with. Plus, the price is great – often under that $15.00 range depending on when you are buying them.

We always like to look at how potentially dangerous a toy can be (in a mostly joking manner) – and the good news is these TOTS toy figures are very safe. The biggest issues you are going to run into is them being thrown, because they are perfect throwing size – and them being stepped on. In particular, the tiny kitten Mia figure being stepped on. Speaking from experience, these figures do not do much damage to your feet – way lower than LEGOS, so you should be in great shape.

With all that being said, we are going to give this a 2 out of 10 – should be a very safe toy for your household.

Really, the only annoying thing is possibly stepping on them and your child complaining from time to time since they aren’t moveable figures. For us, that gives these toys a low 2 out of 10 on the annoyance scale.

Final Grade & Other Links of Interest

These TOTS Figures are very inexpensive and very basic. They don’t do anything special, but they do encourage imaginative play. If your child loves TOTS, they are probably going to like this toy.

Because of the fact they are static figures, we are going to give it a Silver Star Rating instead of a Gold Star Rating.

If you are interested in some of the other Disney Jr. TV shows we have been suckered into buying toys from, check out these reviews we have done:

Between these links, I think you are going to find a toy that will being a lot of enjoyment to your household.