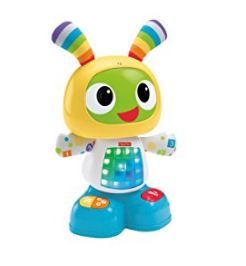 One of my youngest son’s favorite toys is the Fisher-Price BeatBo (I call it the dancing robot) toy. We bought it for my son for his first birthday because he loved to get up and dance. It seemed like a great fit.

My youngest son loved it, and it quickly became one of his favorite toys. When he was yelling or being fussy, I would even go turn it on and encourage him to dance.

The big surprise was just how much my older son decided he loved this toy. Trying to keep a 3 year old from stealing a toy over and over again can be difficult. They would get into some pretty impressive wrestling matches, but it is enjoyable when our boys will play nicely, and dance together with BeatBo playing the music.

If you are looking for a dancing robot for your young child or toddler- I have to recommend the Fisher-Price BeatBo. Please read below for more info on our experiences with it.

This robot is very colorful and well designed. It is about 12 -14 inches in height, so well sized, but easy for a young child to carry around. It is actually recommended for children ages 9 months to 3 years, but my four year old is still dancing to this robot!

It has a large rectangular shaped head that is going to move and bob when BeatBo is dancing. The body has a display screen with little squares that are going to light up and glow brightly when being used. Our sons loves this, and they love just how much this dancing robot jams out.

The feet have 3 different buttons that you can push. Each button does slightly different things. The red button actually lets BeatBo record you talking, and BeatBo will play that back while dancing. There is a dancing button that plays different songs and encourages your child to rock out. There is also another button that does counting/ABC type activities for a little bit of learning.

There are a couple of really neat songs that get my kids jamming every time. The “Freeze Dance” song is a fun, follow along song where BeatBo tells you to freeze during the middle of the dance. There is enough variation in songs & modes to keep your child entertained for a long time.

It does require four AA batteries, and they do tend to drain relatively quickly, so we used rechargeable batteries and have had great success with that.

We have the original BeatBo which actually won some awards as the Infant/toddler toy of the year. There are now a few different BeatBo options to pick from, including a Pink headed version called the BeatBelle and a rotating base option called the BeatBo DLX.

If you are a big fan of this site, you know how we like to grade the potential dangers that a child and parent could face by playing with these toys.

In this case there isn’t much to be concerned about. It is recommended for children ages 9 months and older – so there aren’t any small choking hazards.

Really the only danger here is your child throwing the toy at a sibling, parent, or TV. It only weighs a couple of pounds, so not much harm is going to happen here.

The toy is also very durable. It has been dropped, thrown, tripped over, and much more at my home and doesn’t have a scratch on it.

Hard not to give this toy a 1, it is really, really safe.

It is hard to get annoyed at a toy that brings so much fun and excitement into the home. It doesn’t require being built, and your child doesn’t need any help playing with it.

It is a dancing robot – so that means lots of noise, music, and sounds. Hopefully you aren’t too annoyed by that.

My two children beg me to get up and dance all the time with this toy, but that doesn’t annoy me either. For me, I’m going to give it a 2 out of 10 on the scale – with the biggest annoyance being the sounds and singing.

It is hard to believe it has been about three years since we originally reviewed this toy. This toy isn’t as popular as it once was as my children are now seven and four – but it still makes some dance party apperances!

I would also say this toy was amazingly popular for a couple of year period – so, I have no regrets purchasing it and it still works as good as it did when we originally bought it.

This toy has also become so popular a lot of different variations of it have been created. Here are some of those options that have come out since our original review:

I should also note that any toy that says BeatBo is in a classic green color scheme and BeatBelle is the female equivalent in a pink color scheme. Some of these toys are made in both BeatBelle and BeatBo form!

All of these toys should make a great addition to your toy collection based on your kid’s interests!

This is a great toy. Both of our children love it, even if it was a gift for our youngest son. The dancing and variety of songs that BeatBo plays will keep your child entertained.

It is also a lot of fun to see young children jamming out. How much fun is it watching your kids dance? Plus, dance with them – what is a better than a family dance party!

We give this toy a Gold Star rating, and it should be a great addition to your toy collection.

If you are looking for some other toddler toy ideas, we have some recommendations for you:

Between those great lists of toys, and this great dancing robot toy review – I hope we helped you find the right toy for your toddler!