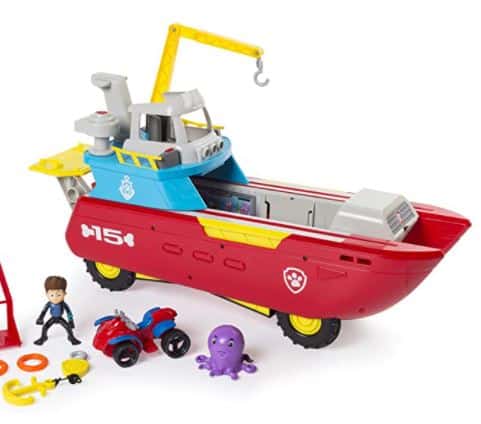 If you are a return visitor to the site, you probably read about our experience with the Lion Guard Training Center and how my son became obsessed with that toy by watching YouTube videos.

I would say my son’s obsession with the Paw Patrol Sea Patroller toy has a similar back story, and after months of begging for this toy, he finally earned it as a reward.

After getting this toy it immediately became one of his favorites. He would even beg us to sleep with his Paw Patroller boat at night!

I am really glad we ended up buying this toy for him – and most importantly – I think our son has really enjoyed the fact we bought it for him as well!

For more information about this toy and our experiences with it – here is our quick review!

The Paw Patrol Sea Patroller Toy is based on the popular kid’s TV series Paw Patrol, and is one of the many vehicles that Ryder now owns to save Adventure Bay (and he probably owns numerous vehicles so kids will beg parents to buy toy versions of those said vehicles).

This toy isn’t made for water, so there isn’t much to do with the boat except for drive it around and have imagination filled adventures. When the wheels are out it actually drives around really nicely, so both modes are fun for play.

The boat also includes some light up lights and a button to push for sounds. The boat has a crane attached to it, as well as a lifesaver launcher that works fairly well. The crane moves up and down and side to side very easily. There is also a front compartment that opens up allowing Ryder’s ATV (included in the set) or other vehicles to drive out of the boat.

Besides the boat, the Sea Patroller set is going to come with a Ryder figure, his rescue ATV, a baby octopus, a long anchor toy (which my son just loves), 2 orange lifesavers, and a red cage that can be lowered from the crane.

The Ryder figure actually has two holes in the bottom of his feet that allow him to stay firmly attached to the cage. The Ryder figure also can grasp the handle bars of the ATV keeping him securely fitted to that toy as well.

My son loves pretty much all components of this toy, but he surprisingly enjoys that toy octopus, the crane, and the lifesavers more than I would expect.

This toy is recommended for children ages 3+. There isn’t a lot of pieces that kids could choke on, besides possibly the little orange lifesavers.

The anchor part of this toy is a rubber anchor and a rubber hook attached together with a little rubber rope. This anchor is surprisingly heavy, and my child loves to spin it around as fast as he can. This has caused himself to hit himself in the face, and if he did let it go and throw it, it could cause some slight damage. Some slight concerns here.

The boat is pretty heavy, so don’t let your child throw it. Hopefully they won’t do that anyways. The other pieces are light and shouldn’t cause you any problems. The Sea Paw Patroller does have a big opening in the middle that you child could put his feet into to try and ride, but because of the way the wheels are designed, this shouldn’t be much of an issue either.

All and all this is a very safe toy. You will probably have a child get hit in the face by the rubber anchor, especially if you have multiple children, but besides that you shouldn’t have many issues.

I hold a soft spot in my ranking for any toy that my child really begs for and enjoys playing with, so I’m not going to be very hard on this one.

The sounds it does make are very quiet, and shouldn’t annoy you much at all. The pieces are durable and very easy for children to use. They shouldn’t need much assistance playing with this one.

The anchor being thrown and spun around are going to annoy you a little bit, but really the biggest annoyance is probably the $60ish price tag. Still, who can put a price on a child’s happiness?

I’m also going to give this a 3 out of 10 on the Annoyance Scale.

I am learning from experience that Paw Patrol keeps creating new characters and new crazy situations for the Paw Patrol to be in so they can release different toys – or at least that is my theory!

The Sea Patroller has also held up very well. All the pieces are still attached, all the sounds still work, and it still shifts between a boat and a land vehicle!

I can see why it has been so popular with my kids! It deserved the Gold Star Rating that we gave it!

The Paw Patrol Sea Patroller has been such a great toy in our house that it easily is going to get Gold Star status. I will tell you it will probably be even more popular if you own some Paw Patrol figures or other Paw Patrol toys to go with it, but it does stand up well on its own.

My son has enjoyed driving it like a truck, pretending it was a boat, and having Ryder go on numerous adventures with it. He enjoys shooting lifesavers out of the lifesaver cannon, and using the crane to lift the toy octopus. If your child loves Paw Patrol, there is no reason for them to not love this toy as well!

If you are looking for some other very popular TV show themed toys, we would encourage you to check out some of these options:

With a list like this, we are hoping you can find the toys that you are looking for – and that you will have as much fun with them as we did in our house!