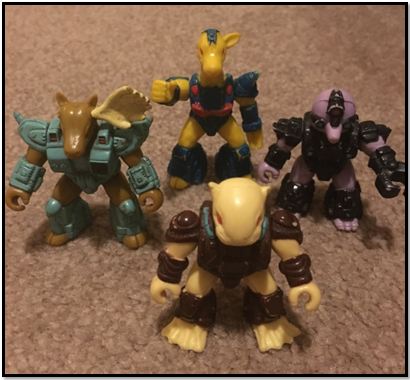 This review is a little different than many of the reviews I have done in the past. When my mother was moving from my childhood home, I spent a lot of hours helping her pack and throwing away things that were no longer needed.

When cleaning my room, I did find some of my favorite childhood toys and memories, and even though I was only 22, I decided to pack them up in a few boxes and I kept those boxes with me thru plenty of moves and adventures.

Now that I’m settled in with my wife and two sons, I was going through some of my old things and happened to find some of my favorite BATTLE BEASTS! I no longer have the full collection and variety I once owned, but I hung onto my favorite 4 characters.

I decided to give my son those four action figures, and much to my surprise, he has really enjoyed playing with them! They make regular appearances in his battles with army men, plus they are often driving his vehicles and getting into other wacky adventures.

It is really cool when you can take part of your childhood, in this case some of my favorite toys, and pass them on to your kids.

If you want to learn more about Battle Beasts and our experiences playing with them – please read on!

For those that don’t know, Battle Beasts were a toy created in Japan in 1986 and were released for distribution by Hasbro in the United States around 1987. They were marketed pretty heavily in the U.S., and there were actually four series/generations of the toy released- basically they released a new group every year.

The first three generation make up 76 figures, and this is where mines were from. Each figure had their unique armor and color scheme, plus different weapons they came with. The weapons for my figures have been lost for many years – which I think is the experience of most kids that played with these toys.

Each figure also had a little button on their chest plate that if you rubbed, it would show the Battle Beast’s strength. In this case you could get fire, wood, or water. When fighting the figures with your friends, fire beat wood, wood beat water, and water beat fire….kind of like playing rock, paper, scissors. My brother and I certainly didn’t play with them this way, but hey, maybe some kids did!

The figures I really remember playing with were a Giraffe & Bighorn Sheep from generation 1 and a Moose, Mole, & Beaver from generation 2. I know there were many more that I played with, but 1990 is a long time ago!

I also had a Battling Big Horn vehicle when I was a kid with my action figures as well. The vehicle held one figure and if you pulled it back, it would move on its own. Don’t laugh kids that was pretty cool back in my day.

For me, these action figures were used in hour long battles with all my other army men, G.I. Joes, Ninja turtles, and various other action figures. For my sons, well they aren’t always used that same way, but I make sure they get played with the right way.

If you want to learn more about Battle Beasts – especially the Japanese versions, I would encourage checking out this Wikipedia page. For wicked cool pictures of Battle Beasts, I found this website very helpful!

If you are new to the site, we always have a little fun telling you how dangerous a toy might be in all sorts of unrealistic situations.

These toys are like 30 years old, have been played with in all sorts of dirty environments, and have been in a box for a few years. They were probably built with all sorts of radioactive plastics and lead paints since it was the 1980’s…..but I’m going to give them a 1 out of 10 since they are so awesome!

I’m not annoyed by these toys at all.

Like I said above, the really neat thing about these toys was that I was able to pass them on to my sons. This not only gave me a chance to play with Battle Beasts again, but it also let my kids take a little peak into my childhood and some of my favorite toys that I played with.

All I can say is if you have some of your favorite childhood toys lying around, crack them out, and hopefully your child will have as much fun as you did.

If you are looking for some cool toy ideas that are a little easier to find then these, I would encourage you to check out some of these links:

I know those Scooby-Doo, Mario Brothers, and Pirate toys will probably bring back a lot of memories for you too!