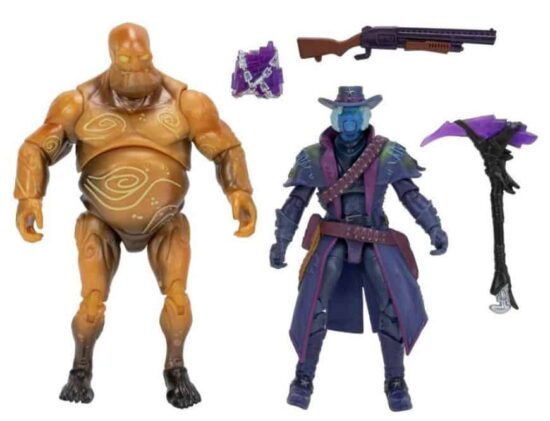 I’m trying to think back to when I was a kid, there is no way there was as many cool action figures out as there is today, is there? I mean, every time we go to the toy aisle, I think there are 3 or 4 neat looking action figures that my son wants to purchase. And every once in a while, I’m kind enough to let him get one.

That once in a while included me buying the Fortnite Duo Mode: Deadfire vs. Mega Cube Brute Action Figure Set for him. I know he likes Fortnite a little bit, not because he has ever played it, but because he heard other people talk about it. But I really think it was the cool look of this set that got him excited, and he did a nice job of convincing me he should have those.

So, check out this Fortnite Duo Mode: Deadfire vs. Mega Cube Brute Action Figures Review to see why he thought this was such a cool action figure set, and to see if you should be adding them to your toy collection!

If you couldn’t tell by the Duo name, this set includes two action figures: Deadfire and Mega Cube Brute. From my understanding (and please don’t quote me on this, I’ve never played Fortnite before) Mega Cube Brutes are the rarest and strongest Cube Monsters and were only available for certain special events.

Deadfire is a Legendary “outfit” or skin, or character – whatever they like to be referred to, that was released in season 6 of Fortnite: Battle Royale. It is part of the Western Wilds Set and became very popular!

Mega Cube Brute has about 12 points of articulation and has almost a gross monster vibe to them. The head moves all around, and the thin legs and big gut makes it an awesome looking action figure.

Deadfire has an awesome ghostly, western gunslinger feel to it. The hat and trench coat look are just classic, and Deadfire also has multiple points of articulation like you would want in an action figure. Deadfire also needs an arsenal to defeat Mega Cube Brute monsters, so you are also going to get his shotgun and scythe. Those weapons can be held by Deadfire, and have an awesome look to them as well.

My son loves having these two characters battle it out, and if you have a young Fortnite fan in the household, they are probably going to love it too!

If you are looking for some really good-looking action figures, you could do a whole lot worse than the Fortnite Deadfire vs. Mega Cube Brute Action Figure Set. It is the great look of these toys that got my son’s attention – and that is the reason they get played with so much in different battles. They have also been known to make an appearance or two in the WWE Steel Cage matches that my son’s like to host, which is always interesting.

I will say these toys are even more fun when you add some other Fortnite toys to go with them. Our collection now includes the Fortnite Battle Bus, Frozen Fishstick Action Figure, and Peely Action Figure. Together, they make a great collection. Overall, we are going to give this action figure a silver star rating.