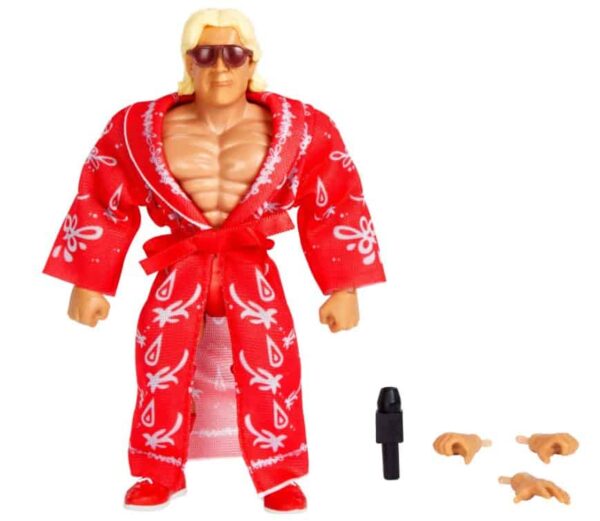 One of the fun things about being a parent is getting to pass on some of the things that you enjoy to your children. That might be sports, a certain book or movie, or a number of other things – and sometimes you will even be amazed at what they decide they love. I was certainly surprised when me and my college roommate were watching WWE, and my son decided to become obsessed with it as well!

That meant I got to show him some of my favorite wrestlers as a kid – and one of those wrestlers he was drawn to was Ric Flair (personally, not one of my favorites, but I let him make his own choices). This led us to buying him a WWE Superstars Ric Flair Action Figure for his birthday, and he has enjoyed it ever since.

So, check out this WWE Superstars Ric Flair Action Figure Review to see why he has liked this action figure so much!

One of the fun things about the WWE Superstars Action Figure Line is they are a little less life like than some of the other WWE Action Figure lines. They are slightly shorter – 5.5-inches in height rather than the 6+ inches that most other action figures are. They are also wider, and they exaggerate the muscle mass and look of the WWE Superstar just a little bit more than most other WWE action figures as well.

This look isn’t over the top goofy, and Ric Flair is still very recognizable, but it is a fun look when compared to the more serious look of most other WWE Action Figure lines.

This Superstars Ric Flair action figure has 16 points of articulation, so they are going to be able to perform a bunch of different moves in your toy wrestling ring. This figure captures Ric Flair’s retro 80’s look, with his long blonde hair and red ring gear that features his classic RF signature on his boots and trunks. It is a really good look.

These Superstar Figure lines also include some fun accessories. Ric Flair’s action figure includes one of his signature robes that includes “Ric Flair” written on the back. The robe is removeable. Ric Flair was the king of style, so this figure also includes a pair of sunglasses and a microphone – which we all know he was good at using!

This WWE Ric Flair Action Figure does a fantastic job of capturing the look and feel of Ric Flair and would be a great retro wrestler addition to any child’s wrestling toy collection – as long as you take the time to show them who Ric Flair is!

I personally think the WWE Superstars Action Figure lines are a lot of fun, and the look and feel of the Ric Flair action figure should make kids really happy. However, if you are looking for a more traditional style of action figure with a more realistic look, I would encourage you to take a look at the WWE Championship Showdown Action Figure Line. You won’t be disappointed with those.

My son has loved playing with Ric Flair, and he has been in a number of Steel Cage & Royal Rumble matches with my son’s other wrestling figures. However, I haven’t seen him win a match yet, so maybe he doesn’t like him quite as much as I thought! We would have no problem recommending this toy, and we are going to give it a silver star rating on our grading scale.

If your child is like mine, they can’t get enough WWE wrestling toys. So, check out some of these other WWE Wrestling Toys we have reviewed:

Hopefully these WWE toy reviews will get you pointed in the right direction!