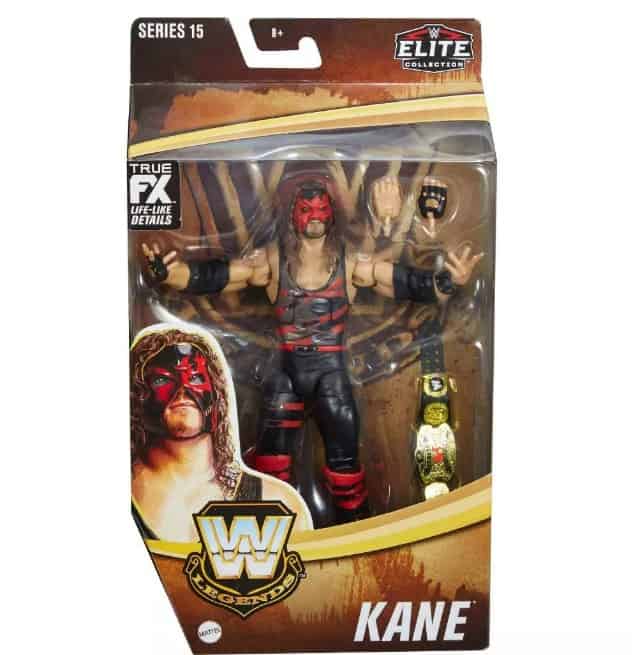 If you have been reading some of the other toy reviews we have done, you know that my oldest son is on a major WWE Wrestling kick right now. That includes him trying to collect every WWE action figure that he thinks is cool. That list of cool wrestlers includes Kane – with his old school look, which is why we ended up buying the WWE Elite “Legends” Series Kane Action Figure.

Why he decided he needed this WWE Elite Series 15 Kane Action figure was because he was watching the 2001 Royal Rumble – Kane would eliminate a lot of guys, but when he hit The Honky Tonk Man in the head with Honky Tonk Man’s guitar, he thought it was one of the funniest things he had ever seen!

Which is how we ended up with a Kane Action Figure and we hope this WWE Legends Series 15 Kane Action Figure Review will help you decide to add this toy to your collection – and if it doesn’t, you can still watch the Honky Tonk Man getting hit in the head with a guitar, it is a pretty good time!

Let’s start with the basics, the WWE Elite Series Kane Action Figure is a Target Exclusive – so if you want to buy it, you are going to have to buy it from there or some other online auction site like eBay.

This Kane action figure is slightly taller than 6-inches and they use a “Superstar Scale” to make these action figures as realistic as possible when it comes to size. The Kane figure is really detailed in his look, and honestly looks just like he did when he was ready to battle in the ring. This includes his iconic mask, long hair, and his black and red ring attire.

The Elite figure set includes Kane’s championship belt, plus a different set of hands that you can swap out. These Elite figures also have 25-points of articulation, meaning they can move to perform a bunch of different poises or wrestling moves. Kane has been used in a bunch of different wrestling matches and Royal Rumbles in our household – and I can see why based on how fun and good looking this figure is.

If you were curious, the four figures who make up the WWE Elite “Legends” Series 15 Collection are:

My son hasn’t seen enough old matches to want those other action figures yet, but I imagine it is only a matter of time. Overall, we have no regrets buying this Kane action figure, and I assume you are going to love it too.

Honestly, this entire WWE elite line of action figures is really cool with the realistic look and 25 points of articulation. This Elite Kane Action figure is no exception and has been a great addition to my son’s WWE Toy collection. Kane hasn’t won a lot of Royal Rumbles, but it hasn’t been for a lack of trying (I think that statement applies to real-life and my son’s action-packed Royal Rumbles).

Overall, this Action figure doesn’t do anything special, so we are going to give it a Silver Star Rating, but if your child is a big wrestling fan, they are going to love having this one – as long as they remember who Kane is!

Like we said at the beginning, my son has been on a major WWE Kick, so here are some of the other WWE toys I’ve been able to play with and review:

I know that list of WWE toys is going to get you pointed in the right direction if that is what you are looking for!