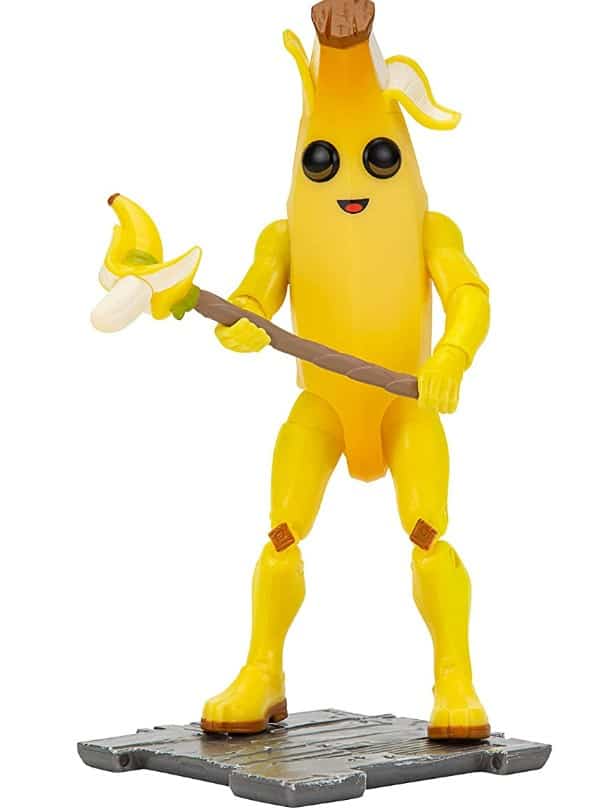 It is funny, my kids have never actually played Fortnite, but they have seen enough gamer videos on YouTube and had enough friends talk about the game, that my youngest son actually wanted to have some Fortnite toys. And even stranger, my oldest son has pick Fortnite character costumes for the past two Halloweens – without ever playing the game! You can see the effects of Fortnite fandom all over the place.

My youngest son ended up requesting a bunch of different Fortnite Character Toys for Christmas (you might as well have those toys if you aren’t allowed to play the video game yet) – and one of the toys he got was the Fortnite Peely Solo Mode Action Figure!

I’ll be the first to admit I don’t know a lot about Fortnite, but I will tell you he was pretty excited to have a Peely Action Figure, and more surprising to me, is that action figure is being played with a lot! So, here is our Fortnite Peely Solo Mode Action Figure Review, so you can read about all the fun experiences we are having with it!

Let’s start with the basics – in case you didn’t know, Peely is an epic outfit in the Fortnite Game that you could unlock when you reached tier 47 in the Season 8 battle pass. That probably doesn’t mean much to most parents – but basically Peely was a special “outfit” or “skin” that your character could earn – and Peely became an instant hit.

This Peely Action Figure is based on that video game look – and is basically a giant banana. This figure is about 4-inches in size and has 25-points of articulation. Basically, that means his hands, feet, knees, and other body parts move – letting you do some fun action moves with him. This figure does stand on its own, but also includes a “metal” building piece that Peely can stand on as well.

That really is the ins and outs of this toy – it is not overly complicated. I would say it is the fun and outrageous look of this character and even his harvesting tool that really makes my son like it. Peely has been involved with wrestling matches with WWE characters and has gone on many adventures with the other Fortnite toys my son owns – making him a great addition to the toy collection.

Like we said above, there is nothing special about this action figure, but the fun look and feel of this Peely Fortnite toy makes it a winner in our house. It is best when paired with other Fortnite toys – or other action figures if your child has a great imagination!

Overall, I’ve been very happy with how Peely has been played with in our household, and I have no problem giving it a Silver Star Rating. And even if your kid doesn’t play a lot of Fortnite but loves those odd and obscure action figures – this could be a fun choice for them!

I completely understand if this Peely Action Figure isn’t exactly what you are looking for – but the good news is that we have done a lot of different toy reviews about some toys that should be a lot of fun for you! Check out this list:

I think that is more than enough topics to get you thinking about that next perfect toy!