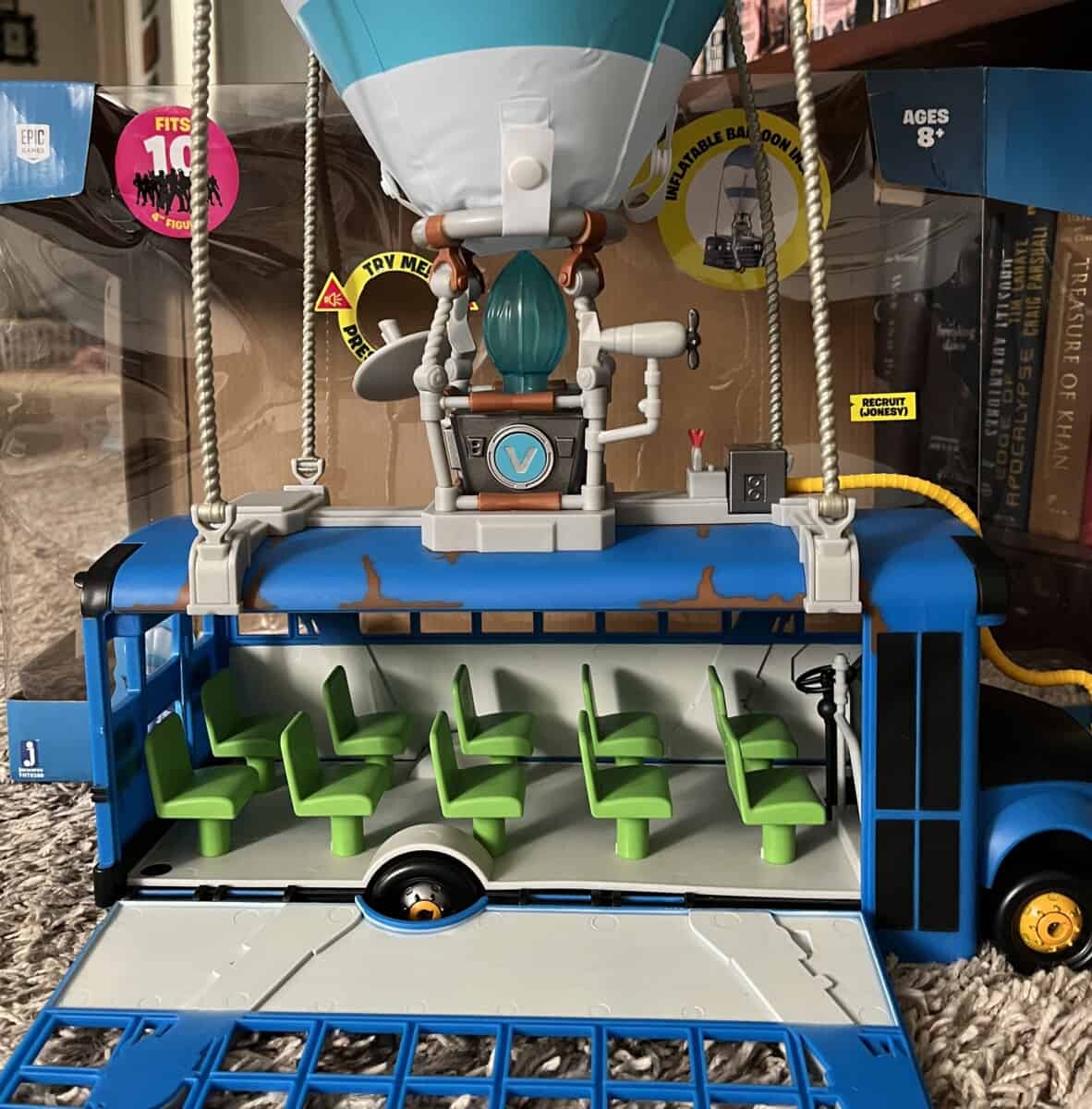 Sometimes when you don’t know what to buy your youngest child for Christmas, it is a good idea to just let them run around the toy aisles and give you some ideas. That is what we had to do this year and my son ended up saying that the Fortnite Battle Bus was a must have toy. Needless to say, we ended up buying it for him.

We were a little surprised that he decided he wanted this toy, especially since he hasn’t played Fortnite before. However, when we got the toy home and were able to play with it, we were very impressed with how much fun it was!

So, if you are looking for something a little different to get your child, or if they are a big fan of the Fortnite video game, check out this Fortnite Battle Bus Toy Review to help you decide if this would be a good fit.

Rated for ages 8+, (even though we bought it for a seven-year-old) – The Fortnite Battle Bus is a really fun Fortnite themed toy that has some really fun features.

There is some assembly required, but it won’t take long for you to put it together. You basically have to blow up the balloon, attach the balloon to the top of the bus using the “strap lines” and change out the batteries if necessary. The only part that frustrated me was the snaps on the balloon that go around the base on the top of the bus didn’t want to snap and took me a second to get them to work, but this was only a minor inconvenience.

The bus is already assembled, so you don’t need to do anything extra to that. It will be about 14-inches in length and tt drives pretty well, so you are going to be able to drive it/push it on carpet or a hard surface. It has a great “school bus” look but a blue color scheme instead of the classic yellow – and even says battle bus on it where you would normally see school bus.

The bus has 10 seats on the inside, and you can fit 10 of the 4-inch battle figures inside of the bus (you will see our Peely Action Figure and Frozen Fishstick Character often going for a ride in the bus). Both of the sides of the bus open up giving you easy access to place and remove characters from the bus. The back door of the bus also opens up.

There is a “V” button on the side of the hot air balloon that is going to cause the lights and music to play. The inside of the bus has a “disco ball” like light that will change/flash colors when the button is pressed. The button also will rotate thru a bunch of different sounds and theme songs – and I’ll be honest, they are pretty catchy.

Our battle bus also came with a 4-inch Recruit action figure – some of the Battle Bus may be sold with a different figure in it. This gives you someone to drive the bus around!

It is the little details that make this toy so much fun. For example, the sounds playing are right from the game, the music it plays is catch, the little details like the steering wheel and the Battle Bus Print across the front really enhance the look, and the idea of a hot air balloon being on top of a bus is just fun. It is really easy to see why my son likes this toy so much.

I think the neat thing about the Fortnite Battle Bus is just how much fun it is. It makes lots of fun noises and lights up, has a really cool idea to it – being a bus with a hot air balloon attached to it, and the sides opening up provides easy access for you to give your action figures a ride. Plus, the fact that it drives pretty well also allows for the battle bus to slam into a thing or two!

The only downside is that you do need to buy a bunch of 4-inch Fortnite Action figures if you want to fill up the bus, but we come to expect that out of toys now! My son has had a blast incorporating this toy into a bunch of his different games – and that is a big reason why we are giving it a Gold Star Rating, which is our highest option!

If you are looking for something a little different than the Fortnite Battle Bus, check out some of these other fun toy reviews we did:

These unique toys are a lot of fun! Thanks for reading and we can’t wait to see you again!