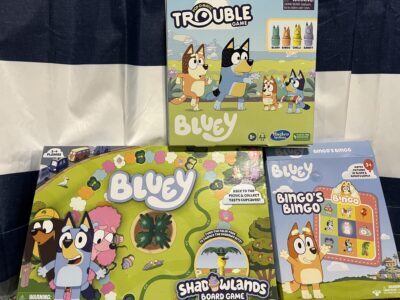 One of the things we really like to do in my house is play board games as a family. We play a lot of traditional games like Zingo, Trouble, Don’t Break the Ice, Uno, and so much more. But we also find ourselves buying a lot of games based on TV shows that our kids are really enjoying at the moment.

And just like most homes, we definitely got caught up in that Bluey craze that swept America! So, we only thought it fitting to share the Best Bluey Board Games and give you a list of some great games you can add to your collection – and hopefully have a fun family game night as well!

And before we argue too much, I understand some of these games on the list might not technically be board games, but rather card games or activity-based games. However, I thought it was important to show you all the different Bluey themed games out there just in case some of them would interest you!

The Best Bluey Board Games Reviewed

1.) Bluey Shadowlands Board Game – This was the first Bluey Board Game we bought for our household, and it is still one of the more popular options for us to play. It is based on the “Shadowlands” Bluey episode from season 1, which also happened to me one of the favorites for my kids!

The point of the Bluey Shadowlands Game is to collect 5 cupcake cards and be the first to make it back to the picnic area. Just like in the episode, there are shadowy bits that you want to stay in to move faster, and sunny bits that will end your turn. The board is always changing because there is a palm tree in the center that you spin that changes which squares are shadowy and sunny!

The game is recommended for children ages 3+ and should be very simple for your children to play. I will tell you it took a moment to get the board setup the first time we played because we were having issues getting all of the board layers to stay locked in, but we haven’t had that problem since.

Included with the game are a colorful board, 4 player pieces, 20 find cards, 10 play cards, and 35 Toy Tokens.

The story behind the game is that it is almost time for bed, but Bluey and her friends want to go on a scavenger hunt instead. The goal is to work together to find 12 Toy Tokens – and the first player to collect enough toy tokens and get to the finish line is the winner.

There are some questions and activities built into the game, and it should be an enjoyable experience playing as a family!

If you are unfamiliar with Trouble (even though the game has been around for almost 60 years) – the point is to get your four pieces from home to the safe zone. Other players who land on the same spot as you send your piece back to the home area – and you need to get a six or have an opponent get a one to get your pieces out from home.

The board is designed nicely, the pieces are fine, and the playtime can be very competitive if you are playing with four players!

For the full review we did on this board game, please follow this link: The Bluey Trouble Game Reviewed.

This game includes 44 colorful picture cards, 4 different character pieces, and a spinner. You are basically building a hopscotch path and you want to be the first player to use the spinner to match the color and be the first to the finish line.

This is a very simple and quick game, so it is good for younger children and children that might have a short attention span and want to get through some games rather quickly! It is perfect for children who love Bluey, but might not be as entertaining for children who don’t like the TV show.

Overall, it is a very quick and affordable card game that will be easy for kids to play on their own.

5. Bluey Monopoly Jr. – There aren’t too many games out there that cause as much division as Monopoly, but luckily for us, Monopoly Jr. is a little simpler. We have had a lot of fun with different Monopoly variations (see our Animal Crossing Monopoly experience for example) – so you could make an argument that the Bluey Monopoly Jr. Game should be ranked higher on the list.

Monopoly Jr. Bluey Addition is rated for children 5+ and is for 2 to 4 players. You can play as Bluey, Bingo, Chilli, or Bandit – and the point is still to collect as many properties as possible while taking a fun adventure all over town. The properties are a lot of fun because they reflect places in the show – like Rug Island, the Dump, Bluey’s School, Uncle Stripe’s Pool, – I don’t want to give them all away, but they are fun!

Buy and sell properties while collecting “dollarbucks” – but you are going to be doing this in a quicker pace than a traditional Monopoly game, making it a much more enjoyable experience for my kids!

Plus, all of the fun properties, artwork, and pieces do make it a lot of fun. I probably should have had this game higher on this list of Best Bluey Games!

6.) Bluey Bingo’s Bingo Game (2 Versions) – Another affordable but fun Bluey themed game we had to buy was Bluey Bingo’s Bingo game. As the name implies, this is going to be your classic Bingo game – where the goal is to get either three in a row or a “blackout” and get all the squares covered. I will tell you from experience, there isn’t anything more enjoyable than playing a blackout round and having your child jump out to a big lead – but the piece they need is buried at the bottom!

When we said there were two versions, they both play exactly the same way – they just have different cards you are trying to cover. The original version which we own (you can read a full review here: Bluey Bingo’s Bingo Game Reviewed) has a lot of characters and toys from the episodes.

The other version is the Bingo’s Bingo Card Game School Friends. This has different cards you are trying to fill up, which feature a lot of Bingo’s School Friends among other things. Both sets include 4 double sided Bingo mats, 36 calling cards, 48 Bingo Chips, and 12 winner/scoring chips.

Overall, this is just a fun Bingo game for kids with a nice Bluey twist to it!

Each set has 53 different cards, and they are called 5-in-1 Card Games because there are five different card games you can play with the same 53 card deck. I should also mention that the cards are jumbo sized, making it easier for young children to hold onto (that was always a concern we had when trying to play cards with my youngest son).

The five games you can play are Cheese ‘N” Crackers (we would call this SNAP), Bluey’s Battle (we call it WAR), Go Fruit Bat (yes – the classic Go Fish game), Grannies (AKA Old Maid) and Memory…which is Memory. It is really cute how they named the games after popular episodes and characters from the show!

Just like with Bingo’s Bingo, the difference in the Original Bluey 5-in-1 Game and the Bluey 5-in-1 School Friends Game is the characters on the cards. Both versions are going to bring a lot of fun to any Bluey obsessed household!

8. Bluey’s Charades – If you and your kids are huge fans of Bluey, and you are looking for a fun and interactive type of game to play as a family, Bluey’s Charades is the perfect option for you!

If you are like me, the thought of playing Charades seems like a scary idea, but Bluey’s Charades gives you 60 different cards to act out from the show – including characters, items, animals, and props from the show. Talk about a great way to get the family laughing!

The official rules of the game state that you want to be the first player to get 5 cards by guessing correctly. Of course, if you are having so much fun, you can just keep on playing until you run out of cards in the deck!

The game is for 2 or more players and is rated for ages 3+ but can really be played by anyone who loves the show!

Board Game Review Links of Interest

Hopefully these board games and toys will be a great addition to your toy collection!