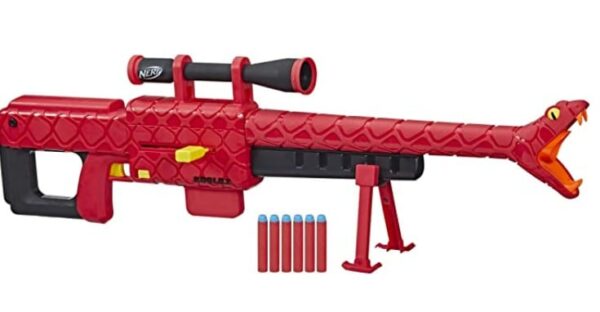 My kids love when we get them toys that combine a couple of different things that they like. I can still remember when my youngest child found out that make Nerf guns in a Roblox theme – and those Nerf blasters quickly became the toys he craved more than anything.

And who can blame him! We all love Nerf blasters and having Nerf battles (I think most of us would agree you are never too old for those). And people of all ages love Roblox – so it just seems like a natural combination to create Nerf blasters based on a popular video game.

That is why we created this list of the Best Nerf Roblox Weapons so you would have the opportunity to see all of the great Roblox Nerf Gun options and see if they would make a great addition to your Nerf Arsenal!

We would also call this the Roblox Sniper Rifle because of its look. It has a long barrel, a scope, a clip that holds six darts, and it is uses a single shot bolt-action process to shoot/reload. You will be amazed at the accuracy you get with this Nerf gun and will have a lot of fun with target practice.

We did a full review on the Nerf Roblox Zombie Attack Sniper Rifle – so click on the link if you want to learn more about this toy and the experiences we had with it!

This Pulse Laser Dart Blaster includes 10-darts and has a 10-dart clip. This Nerf gun is a motorized, meaning you are going to be able to pull that trigger and launch 10 darts at a rapid pace! This Roblox weapon is a great weapon for any home that likes to have an occasional Nerf battle!

The only downside is that it requires 4-AA batteries – which aren’t normally included. But the awesome look and performance of this dart blaster makes up for that!

This Nerf Roblox blaster has a Shotgun like look to it, and a fun orange and yellow color scheme. The yellow looks like honey dripping down the blaster, and this weapon holds 8-darts in the drum. It has a lever you use to prime the weapon and spin the drum from dart to dart – but you will be able to launch 8-darts at your opponent quickly and with a lot of power! The only downside is the lever action was a little tricky for some of the younger children we have seen use this blaster, but once they got the hang of it, they didn’t have any issues.

You are going to have a lot of fun launching darts from this weapon!

This is the perfect option if you are looking for a fun Nerf gun that is different than what you normally get!

The loading and shooting design of this Nerf Roblox Shark Blaster is unique when compared to the other options. This blaster allows you to put three darts into the front of the blaster (there are three slots built into the front of the gun and the blaster comes with three elite darts) and you use the shark fin on the top of the blaster to prime it. Basically, pull the shark fin back and pull the trigger until you launch your three darts!

The look of the Nerf Roblox MM2: Shark Seeker Blaster has an amazing look – and the shark theme will be a hit with most kids!

6.) Nerf Roblox Ninja Legends Shadow Sensei – If you wanted to make a case for a Nerf Weapon being too low on this list of the best Roblox Nerf weapons, I think you could make the best case for this Nerf Roblox Ninja Legends Shadow Sensei option! It has a great look and a lot of cool features that will make it a big hit for Nerf fans and Roblox fans!

One of the coolest things about this Nerf blaster is the cool grip, the nice green and white color scheme, and the overall look of it. This Roblox Nerf Gun has a 6-dart capacity and uses a pump action priming and shooting style that will be easy for children to use. It is a 1-dart at a time weapon – but you can pump those six shots out very quickly!

Overall, I love the look of this Roblox Ninja Legends Shadow Sensei blaster – and you won’t be disappointed with this option!

Like we said, this is a great option if you are looking for dueling pistols, a gun for each child, a fun target shooting option – or anything of that nature!

8.) Nerf Roblox Arsenal: Soul Catalyst Dart Blaster – Based on the Roblox experience Arsenal by ROLVe Community – the Nerf Roblox Arsenal: Soul Catalyst Dart Blaster is a really good looking Roblox blaster with some really cool features. The coolest feature being the glow in the dark details on the blaster that look really cool. They might give your position away in a night battle, but they look awesome!

The Soul Catalyst blaster is a single shot Nerf blaster, that uses a slide action to prime and fire. Basically, load your dart, slide the top of the blaster and let it go, and fire! This blaster comes with 4-nerf elite darts and is a lot of fun to play with!

This is a great option because of the awesome look and the glow in the dark details!

The Dartbringer Dart Blaster has an internal 3-dart clip that you can load up. This means you can blast 3-darts pretty much instantly at an opponent. You do have to slide the top to prime and fire – and of course this Nerf blaster comes with 3 darts. This weapon fires with a lot of accuracy and the look sets it apart from a lot of the other options!

This Roblox blaster is a one-shot dart blaster that comes with two darts. It has a sharp green color which is why we put it at this ranking – and has an orange handle that you pull down to prime it. Once primed and ready to go, pull the trigger and launch your dart. You will like the power and accuracy that comes out of a single dart blaster!

11.) Nerf Roblox MicroShots Roblox Tower Defense Simulator: The Mint Choco Freezer Dart Blaster – Okay, if you are looking for the Roblox Nerf blaster that has the longest name, I think this is your winner. I would also say this blaster has the most unique look – with its ice cream cone style handle, cherry on top decoration, ice cream scope gun decoration, and overall food themed look.

This option is also a single shot blaster that has a lever you pull down to prime. Once primed you pull the trigger to shoot and repeat the process with however many darts you have! This option comes with two darts, and I would say you are purchasing this one for its very creative and unique look.

Besides the blue color scheme and big orange plasma ray looking barrel, this is also a single shot Nerf weapon. Just like the last two options, it also has the same pull-down lever action priming system and will shoot a single dart. It also comes with two red and blue topped elite darts and makes for a great stocking stuffer or smaller birthday gift!

13.) Nerf Roblox Strucid: Boom Strike Dart Blaster – The last entry on our list of the Best Roblox Nerf Weapons is the Nerf Roblox Strucid: Boom Strike Dart Blaster. This option is very similar to the last three listed and is another single shot blaster that uses that lever priming action to fire a single shot. Load your dart, pull down the orange primer lever, aim, pull the trigger, and watch your dart launch. Rinse and repeat.

The Nerf Roblox Strucid: Boom Strike Dart Blaster has a very clean white look which I actually appreciate a lot. If you like that clean look, this blaster will ranker higher. If you are looking for something a little more outrageous, the last few listings will be a better option, but they all use the same loading/firing technique.

I think these awesome Roblox themed Nerf blasters are going to be a great addition to your Nerf collection, but if you want to check out some other options, here are some other fun Nerf reviews we did!

We will have some more reviews coming soon, so check back often!