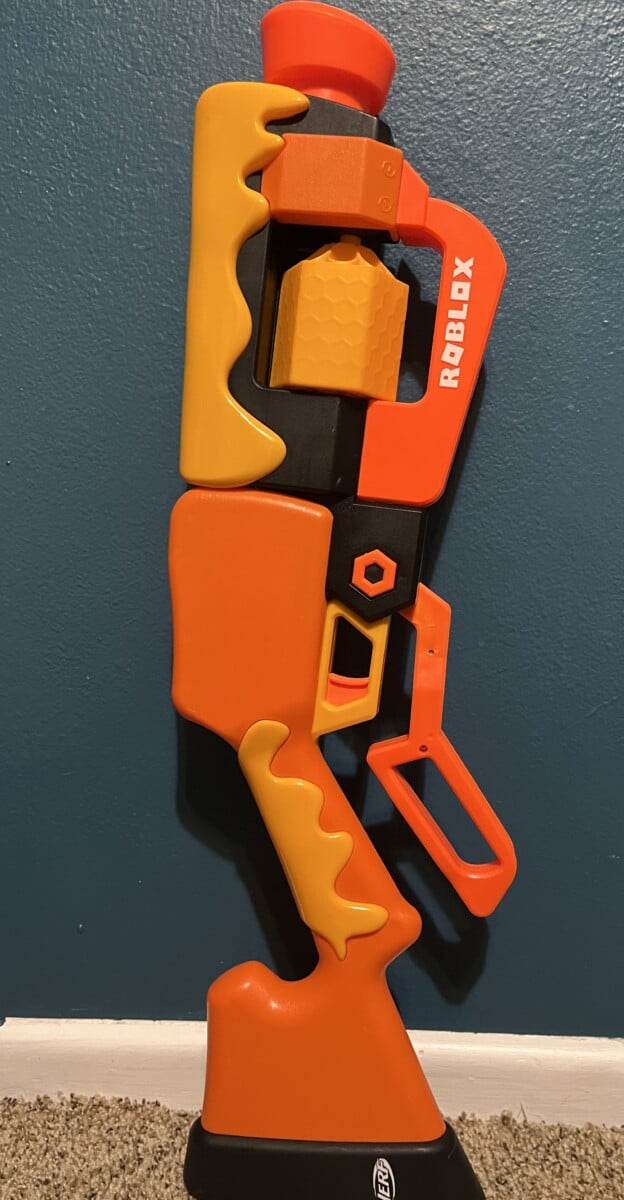 One of things that my youngest son likes to do is check out the Nerf aisle every time we are at the store. The moment he saw the Nerf Roblox Shotgun (I think the full name is technically the Nerf Roblox Adopt me! Bees! Lever Action Blaster, but I’m not going to type that every single time) he started to beg me for it. That was the Nerf weapon he really, really wanted.

We ended up getting that Nerf Shotgun for his birthday, and it turned out to be a very good buy. He has used it in a number of different Nerf battles – and it has performed well. He will even bring it out for an occasional target practice battle with his older brother.

So, here is our review of the Nerf Roblox Shotgun or the Nerf Roblox Adopt Me! Bees! Lever Action Blaster – whatever you want to call it! And hopefully you will see why my son was so excited to get this toy!

The nice thing about the Roblox Nerf shotgun is there is no assembly required and it looks sharp as well! It has a great orange and yellow color scheme – and you can see the bee influence, especially in the barrel of the Nerf gun!

The downside to this Nerf gun is it is one of the more complicated to load and use – and I’ve seen a lot of kids come over, try to play with it when I wasn’t watching, and they really twist/bend the lever and can’t seem to get it to blast. Once you teach your kids how to do it (depending on their age), it shouldn’t take them long to get the hang of it, but younger friends who visit will probably bang it around a little bit.

This shotgun holds 8 darts – and not coincidentally – it comes with 8 darts as well. Step one is to load the darts into the rotating drum. This is actually easy to do, stick the darts in the holes, and gently twist the drum clockwise to load the next darts into it. Nothing too complicated.

Once the drum is loaded, you cock the lever forward until it rotates the drum and pull the lever back. Once you do this, the blaster is ready to launch a dart – aim and pull the trigger! Once you dart is blasted, just repeat the process until you launch all eight darts. The darts are launched one at a time, so you have to cock the lever each time you want to reload.

Like we said, this process shouldn’t be too complicated, but for some reason younger children seem to have difficulties pushing the lever all the way until it rotates, or once it is cocked and ready to launch, they pull on the lever again and it gets a little out of alignment. You also got to teach young children not to twist that lever, you don’t want it breaking off.

The blaster itself shoots with nice accuracy and power – which is why we love playing a hunting game with it. Normally dad will pretend he is Bigfoot, and my sons will try to chase me and blast me, while I try to capture them and punish them. It is a fun game, and they don’t mind getting blasted by this Nerf Roblox Shotgun from time to time.

I really don’t have any major complaints about the Nerf Roblox Shotgun. Overall, I think it is going to be a very good buy for any child that loves Nerf guns or any child that is a big fan of Roblox. The colorful design, the ability to load eight darts into it, and the accuracy/power of this Nerf weapon make it popular in our house.

I am going to give this toy a silver star rating on our grading scale – and we would have no problem recommending it as a gift idea or toy purchase for most children.

If you aren’t sure yet about this Roblox themed Nerf Shotgun blaster, here are some other Nerf Reviews we did that might interest you:

If you are looking for some other fun video game themed toys, check these out:

Between these reviews, we hope you find the perfect toy purchase!