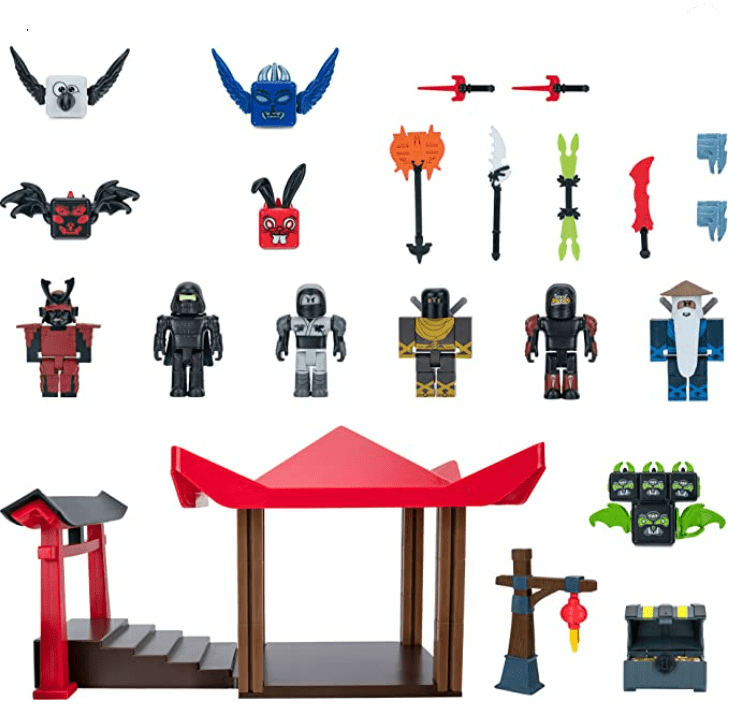 There are a lot of really fun video game themed toys out on the market today, and I’ve been surprised by how many good Roblox toys are on that list! I started to find out just how many Roblox toys there were when my youngest son started to become obsessed with that game (another game he didn’t play at the time but heard about it from gamers and friends at school).

We ended up getting him the Roblox Ninja Legends Playset, and we have actually been amazed at how much he has enjoyed playing with this set. This set has some fun elements, and a lot of really cool characters, so I guess we shouldn’t have been so surprised by how much he enjoys playing with it.

So, here is our Roblox Ninja Legends Playset Review – which should give you a pretty good idea of why you should be adding this toy to your toy collection!

The Roblox Ninja Legends Playset comes with 29 pieces, that includes characters, weapons, a ninja dojo/hut, some block character monster guys, and even a treasure chest. They are designed really well and have a great look to them that kids should really enjoy.

There is a lot to love about the Roblox Ninja Legends Playset, but the biggest selling point has to be the six cool character figures it comes with! Each figure has a really cool name, costume, and design – with those characters being Cybernetic Hunter, Dark Ninja, Dragon Master, Master Ninja, Master of Inferno, and Ninja Legends: Assassin.

The character figures are about 3-inches or so tall. It should be noted that the heads, legs, and arms can be removed – so they can be destroyed and shattered into a bunch of pieces in your child’s game, or you can mix and match the different parts of the characters to make your own unique character. Each one of those options seems fun, but it seems like my son spent more time “blowing up” his ninja characters!

Each character comes with a cool weapon, and you can mix and match the weapons with the characters as well. I would tell you the big battle axe, the red sword, and the sword on a pole (I think that is called a naginata, but please forgive me if I’m wrong) are my son’s favorites, but the gauntlets, the two blades with the handle in the middle (I don’t know what that one is called), and the twin sai are really cool too.

There is also a building that is formed with different pieces. Honestly, my kids stopped setting it up and playing with it after the first few times, but it does make appearances when they want a building to get destroyed in their game. It is a little flimsy when you are putting all the pieces together, and it won’t surprise me if your child loses a piece or two that goes to that dojo/ninja hall! However, I know there are some kids out there that are going to love that part of this playset.

The little block monsters are pretty small and have wings coming out of them. I don’t really remember my kids playing with those – but they do have a pretty cool look to them. They are a nice enemy element to add to the game, and there are five of them including a four headed one!

Surprisingly, the included treasure chest was also another element of the playset that my children love. There is something to be said about battling for treasure, and it added some fun moments to their games. The treasure chest is built to look like it is full of coins, so there isn’t room for you to add things to it, but is has a neat look to it, especially on the outside.

Between the characters, weapons, building, block monster enemies, and treasure chest, children are going to have a lot of fun playing with the Roblox Ninja Legends 29-Piece Set, and I have no problem recommending it as a toy to add to your collection!

There is just a lot to love about this Roblox Ninja set. The characters really are the biggest selling point with their great looking design and awesome weapons. It is so much fun having different types of ninjas, a character that looks like a Samauri warrior, and an older sensi designed figure. It is also a lot of fun that the characters do come apart and can be mixed and matched with their designs.

Overall, if you are looking for a fun designed ninja themed toy, a fun Roblox themed toy, or just a unique action figure set that is going to encourage imaginative play, this set is going to be a fantastic option. I’m going to give this playset a gold star rating and will encourage you to buy it for any Roblox or Ninja fan.

If you are looking for some other fun Roblox toys, or if you want to explore the world of Fortnite toys, here are some other reviews we have done!

Keep your eyes out for more Fortnite and Roblox Toy Reviews coming soon – and I got the feeling we will be bringing back some video reviews of those toys as well in the near future!