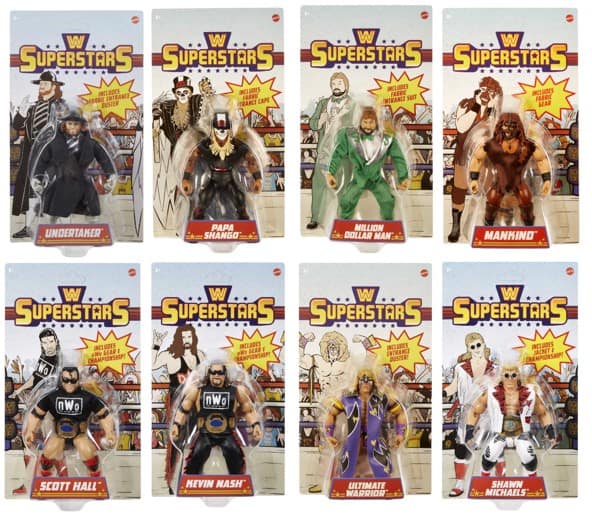 We should also note that these WWE Superstars Action Figures are a little less realistic than some of the other Action Figure Lines they have (such as the WWE Championship Showdown Action Figure Line Options we reviewed earlier). They are a little shorter – 5.5-inches or so vs. the standard 6-inches of most figure lines, and they are a little thicker and wider. They also have a little more exaggeration on the muscle outline, which actually creates a really fun look that children should love.

If you want some really cool action figures that feature a lot of the all-time greats, then check out this list of the best WWE Superstars Action figures to see all the fun options that are out there!

Here is a quick list of all the best WWE Superstars Action Figures! There are some photos and a more detailed review below this quick list! We should also note that every figure in the WWE Superstars Action figure line will come with some special accessories unique to the wrestler. That is another reason why these figures are really cool!

The WWE Superstars Series 1 Action Figure line was released in 2021 and features four very popular wrestlers – with a nice mixture of old school and more recent superstars. You have the “I’m Cool, I’m Cocky, I’m Bad” self-proclaimed Greatest InterContinental champion of all-time: The Honky Tonk Man. You also, have “When You’re in nWo, You’re in nWo 4 Life” Hollywood Hulk Hogan.

The third option is the 80’s looking Nature Boy Ric Flair and his “to be the man, you got to beat the man” attitude. Your fourth option in the Series 1 WWE Superstars line is Bray Wyatt and his – Yowie-Wowie – Welcome to the Firefly Funhouse character. Overall, these were four really fun action figure options.

The second release of the WWE Superstars action figure line included some very popular old school wrestlers including: Scott Hall – “One More for the Good Guys” – in his nWo ring apparel. He is joined by Kevin Nash – “So this is where the big boys play” – in his nWo gear and title belt.

The other two figures in this series aren’t nWo members but were still very popular. You have “The Power of the Warrior” Ultimate Warrior action figure and “The Heart Break Kid” Shawn Michaels. These four were some of the most popular WWE wrestlers ever!

The release of the WWE Superstars Series 3 action figure line included some great superstars, including my all-time favorite wrestler: “Rest in Peace” The Undertaker. Not as popular, but certainly one of the coolest looking WWE Superstars, you have “The Spell has been put on You” Papa Shango.

The third figure in this line is one of the all-time best heels- “Everybody’s Got a Price” The Million Dollar Man Ted DiBiase. And finally, you have “Have a Nice Day” Mankind – in his old school look. You can’t go wrong with the action figures released in the series 3 line!

Not all of the WWE Superstars Series 4 Action figures have been released as of the writing of this article. The Rock and Typhoon were taking pre-orders on Walmart.com – which is normally the exclusive seller of a lot of these action figures.

The other two action figures in this set – Mr. T and Macho Man Randy Savage – are a blast to play with as well.

If you are looking for some other really fun WWE Toys, check out some of these other reviews we have done:

These WWE wrestling toys should be a lot of fun!