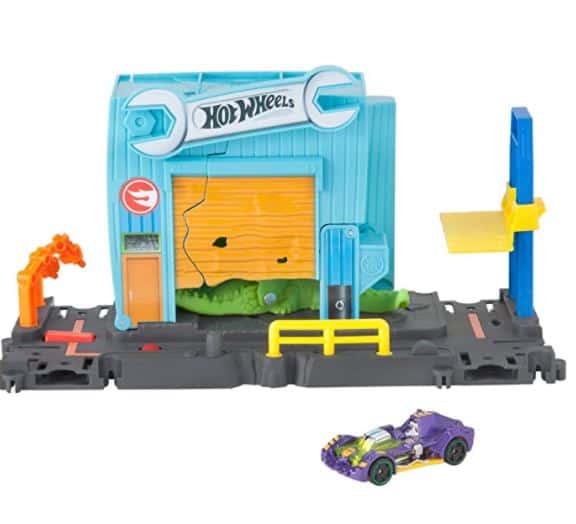 So, here is our Hot Wheels City Gator Garage Attack Set Review, giving you our honest opinion of it, and letting you know our personnel experiences with it.

Rated for children ages 4 – 8, this really is a very simple Hot Wheels Track. It is a garage that has a hidden gator inside of it, with a big decorative Hot Wheels wrench on the garage itself. The garage will pop open revealing the giant gator – who just might eat your Hot Wheels car. On the right side of the set is a little car lift, and on the left side of the set is a couple of robotic repair arms that you can pretend you are doing repairs to a car with. Both the ramp and the arms move positions.

There are two big orange buttons on the roads in front of the garage and by the robotic arms. When those buttons are hit, the garage pops open and the gator mouth pops out – covering the front part of the road.

There are three different places that you can attach track pieces to, and basically create roadways that lead to the garage or attach to other Hot Wheels City Tracks. Since this is just a building, it does function better and is more fun when it is connected to other track pieces and Hot Wheels City sets.

There are some fun features to this toy, and it does make a nice addition to other Hot Wheels Track Sets, but it isn’t the best standalone toy.

Good news for parents is that this toy is not very annoying. The only thing that could annoy you is your child might need help reloading the garage with the gator. And your child might complain that the buttons aren’t launching the gators how they would like. All of that is enough of an annoyance to give it a 3 out of 10 on the annoyance scale.

This Hot Wheels City Gator Garage Attack was a tough toy to grade. It is simple, and it is fun – but it is pretty basic. I would also say it works a lot better when paired with other Hot Wheels City tracks than when it is just played with by itself.

Because of those factors we are going to give it a bronze star rating. I would also say that other sets like the Hot Wheels City Cobra Crush and the Hot Wheels City Bat Manor have been more popular choices in our household. Our kids will play with those a lot more often, but this Gator Garage will be a nice toy for anyone just starting a Hot Wheels City Track collection – or for any kid that loves gators and garages.

There are some amazing tracks in the Hot Wheels City collection. We would recommend checking out these two reviews: The Hot Wheels Super Ultimate Garage Review (This is the Biggest Hot Wheels Track) and this Complete List of Hot Wheels City Tracks – there are a lot more than you would think.

For something a little different, check out this Best Hot Wheels Color Shifters Review.

To connect all of these tracks, you should think about purchasing a track set like this: Hot Wheels Multi-Loop Track Builder Set.

Between these great reviews and lists of Hot Wheels Sets, you are going to be able to find some great tracks for your playroom!