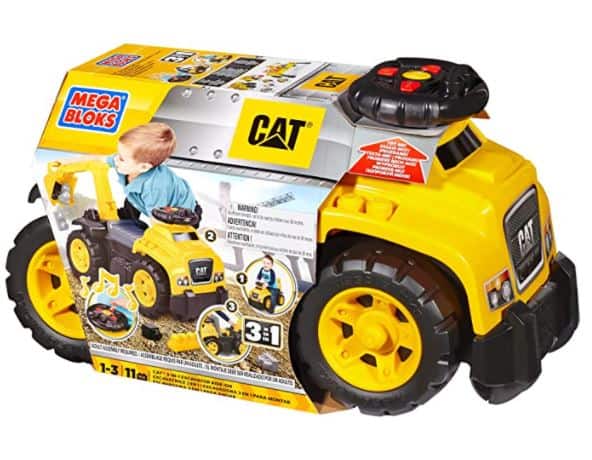 With how much fun our oldest son had with his ride on/push toy (his is a Thomas the Train push toy) – it only made sense that our youngest son would need a ride on toy of his own.

Luckily for him, he was given a Mega Bloks Ride on Caterpillar with Excavator Truck to play with for his 1st birthday. He has had to battle his brother to make sure this toy remained in his possession from time to time, but he has really enjoyed it.

This toy is a great ride on toy or push toy – and one that our child has really loved. Below is our quick review of this toy, including our danger and annoyance scale ratings!

The Mega Bloks Ride on Caterpillar with Excavator is a fantastic toy. It is recommended for children ages 12 months to 4 years and does require 2AA batteries to operate the sounds and lights (which are included if you are buying it new).

From a size perspective, the dimensions are 23.5 x 12 x 13.5 inches – so my son was about 1 ½ years old before he could really reach the floor and push himself along.

It does come with 10 small Mega Bloks, and there are a couple of places you can attach those bloks too on the actual Caterpillar truck. Realistically, there isn’t much too do with those bloks on this toy, so you are probably going to add them to any other Mega Blok set you own.

The big selling point is the excavator arm. It is attached to the back of the truck and has a full 360 degree range of motion. The scoop is large enough to be used in sand boxes, and my oldest son loves to place his toys inside of it and drive them around the house. It is easy to operate, and should bring plenty of enjoyment to your child.

It has the classic black and yellow color scheme you would expect from a Caterpillar toy – and the seat is gray. The seat does lift up to create an underneath storage area that is actually pretty deep.

The steering wheel easily rotates and there are sound buttons on it which can be pushed to create a variety of different noises. Most children should really like the realistic sounding truck noises it makes.

Overall, this is a very safe toy. Anytime you have a push toy, or a sit on riding toy, you are going to have a few crashes. We found that teaching our oldest child to not ramp the Caterpillar Truck over things while his brother rides on it increases the safety of it dramatically.

The base is actually pretty strong, so we haven’t seen much tipping over or falling off, even while our 1 ½ year old rides around on it. While pushing it, you can get some decent speed going, but our Thomas the Train push toy is faster.

I have often come into the kitchen and seen my child standing on this toy trying to reach things that are on the counters. This could be dangerous if you leave sharp objects on your counters, or if your child falls of the truck. We haven’t had too many crashes from this situation, but it can certainly happen.

The toy is pretty heavy, so I wouldn’t expect your child to pick it up and throw it, but I have been wrong before. You could see one of your children try to run down your other children with this truck. A knockdown or two could happen.

Due to potential accidents that clever children could cause with this toy, I’m going to give it a 5 out of 10 on the danger scale, but a little adult supervision greatly diminishes the risk factor.

I honestly thought this toy was going to be more annoying than it was when we got it. Sure there are some noise making buttons, but they aren’t overly loud, and they don’t sing incredibly annoying songs – which tends to happen from some Little People Toys (I’m looking at you Little People Toy Airplane).

Of course, you may find your child running the Mega Blok Caterpillar Truck into your legs over and over again – that is incredibly annoying, but it is usually a habit you can break pretty quickly.

Since it is not overly dangerous, loud, and there is basically no build time associated with it, I actually really like this toy. I’m giving it a 3 out of 10 on the annoyance scale because it took a little longer for me to break the ramming into your leg habit than I think it will take most parents.

Wow, it is hard to believe it has been about four years since we originally wrote this review! Time flies when you are having fun.

Since this original review this toy is still in operation. The boys still crash it into things, they still jump off it, and they still love it. It has made a transition to an outdoor toy – which I probably don’t recommend for most people.

I would still give it that gold star rating that we originally gave it, and I am amazed I didn’t rank it a little higher on the danger scale based on a kid trying to ride it down some stairs….but that is a story for a different day!

Toys that are durable, lots of fun, and can be used in a number of different ways are very rare. This toy fits that bill, and it isn’t even annoying to parents! I’m going to give this toy a Gold Star rating because of just how often it is used in our daily play routines.

The Bloks that are included are going to be an afterthought – you might as well just go and incorporate them into your other Mega Blok toy sets. If you purchase this toy, make sure you are looking for an awesome construction themed push toy!

If you are looking for a different type of Mega Blok toy, feel free to read our reviews on the Mega Blok Dump truck, Mega Blok beginner’s train set, Mega Bloks PJ Masks Sets, and the Best Mega Blok Toys of 2021 – that we previously reviewed! You can also check out a lot more transportation themed toys here!