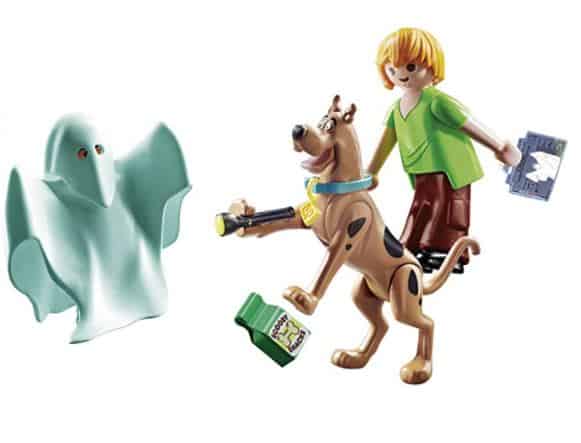 One of the cartoons that my children have become obsessed with was Scooby-Doo, which is kind of cool since we all probably had some version of Scooby-Doo in our lives when we were younger.

With this TV show obsession, we had to get some Scooby-Doo themed toys in our household. We got a few different sets, but we also got one of the most basic sets as well. That would be the Playmobil Scooby-Doo! Scooby, Shaggy, and Ghost figure set.

It really is about the simplest Scooby-Doo toy that Playmobil sells, but my kids have really enjoyed it. I would also say it is a perfect starting toy for any child that likes Scooby-Doo, and any parent that doesn’t want to spend a lot of money to get the Scooby-Doo toy collection started!

Like we said, this toy is pretty simple. It is a 22-piece set that is recommended for children ages 5+. It comes with a Shaggy figure, a Scooby Figure, and a creepy guy. The creepy guy is supposed to wear the two-piece ghost costume so Scooby and Shaggy can capture him.

Now this ghost costume can be placed on Shaggy – but it doesn’t necessarily fit the best. We also have a few other figures from Playmobil that it can be placed on. For some reason, my youngest likes to make Shaggy the bad guy.

Other accessories with the set include a flashlight, a food tray, a burger and Scooby-snacks, and a few other things. You can use these figures to create all-sorts of adventures, and the figures do have arms and legs that move. It really is that simple.

The downside to this toy is that it is best when paired with some of the other Playmobil Scooby-Doo sets (You can read about those here: The Best Scooby Doo Toys) or when they are paired with the Playmobil Mystery Machine set. Those sets help you create even more adventures and helps create even more playtime fun.

But when you think about it, these sets only cost about $15.00 – so can you really complain about much? The figures are cool, the ghost costume is cool, and they should be really fun for kids.

We always like to take a fun look at how potentially dangerous a toy could be. It is tough for a Scooby-Doo Figure set to be dangerous. However, some of the accessories are very small and can be a choking hazard. That is why the toy is rated for children 5+ and is something to consider if you have young children in the household.

Otherwise, your only danger is a child chucking one of the figures at you. That is a danger with every toy, however.

We also like to have some fun and tell you how annoying a toy is going to be for parents. Again, it is hard for a figure set to be annoying – especially when it doesn’t make noises, or light up, or really do anything.

The one annoying thing is that the small pieces are easy to lose. So, you could hear your child complaining about losing a toy flashlight accessory and you aren’t going to have any luck finding it. These toys really don’t cause much discomfort when stepped on, so you got that going for you.

Because of those reasons, we are going to give it a 3 out of 10 on the danger scale.

Like we said at the beginning, this Scooby-Doo Ghost, Scooby, and Shaggy figure set is a great addition to any starter’s collection of Scooby Toys. It also pairs extremely well with the other playsets.

The downside is accidently losing the small pieces and the lack of bells and whistles. But again – it only costs about $15.00. So, we are going to give this a silver star rating!

If you want to learn about some other great toy options, check out this list:

Those TV themed toys should be a blast in your household…and makes me think we watch to much TV in my household!