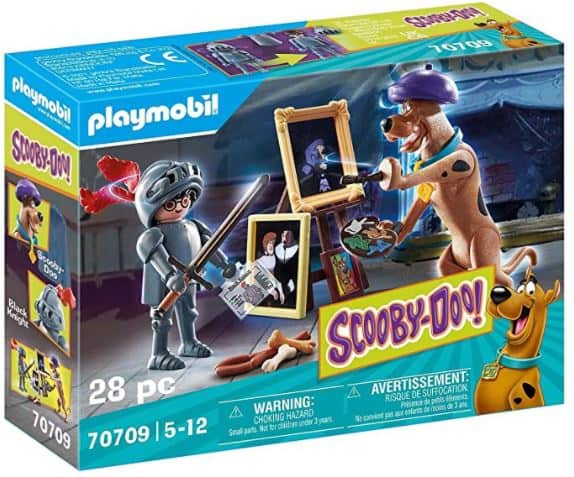 Check out this complete list of the Best Playmobil Scooby-Doo Toys. If you want more information about each Scooby Doo Toy option, there is a quick review of each one underneath this chart!

A Complete List of the Best Playmobil Scooby-Doo Toys

A Quick Review of the Best Playmobil Scooby-Doo Toys

In fact, this playset is 170-pieces and is recommended for children ages 5+. It is going to come with Fred, Daphne, and Scooby-Doo figures, but also a mansion, a vampire figure, a coffin, and so many more accessories that will make this toy a lot of fun.

This mansion is full of surprises. There are trap doors, secret hiding places, a hanging chandelier, a trick staircase, a light up coffin, and so much more. Plus, if you download the Playmobil app, you can project hologram ghost and ghouls on the floor – and the mansion will make all sorts of sounds and noises!

This playset is extremely awesome, and we didn’t even mention all of the little features that make this toy special. If your child is a Scooby-Doo fan, they are going to want this toy! Clearly, it is the #1 Scooby-Doo Toy from Playmobil.

The big reason we ranked this toy second on our list is because of how well the mystery machine gets up and goes, and just the overall great design of the toy. It is a 72-piece set that is rated for children 5+ and should bring a lot of enjoyment to any household.

You get to build the Mystery Machine -and like we said above, it drives really well. It has exits on the top, on the side, and in the back – and you can lift the windshield off to insert the characters into the driver and passenger seats. The back is loaded with all-sorts of cool devices that will light up and make noises. It also comes with a Fred, Daphne, and Velma figure – plus all sorts of little accessories like magnifying glasses and much more.

This Mystery Machine has been incorporated into most of the different adventures my child has with all his different toys and has been a great addition to our toy collection.

This set comes with Scooby-Doo, Shaggy, Velma – with Shaggy and Velma being dressed in Egyptian garb to help them go undercover to solve the mystery. There is also a Pharaoh figure that can be the villain of your mystery.

The tomb you assemble is also very cool. It has a big tomb entrance, a couple of secret passageways, a couple of ghost cards that you can collect and use in other play sets – and so many more accessories that children are going to enjoy.

With the cool characters and the cool Egyptian theme, this playset option should be a lot of fun for children!

This set is a 70-piece set that comes with Fred, Daphne, and Scooby. The villains are an “Alice May” figure that is dressed in a creepy green ghoul outfit and there is also a skeleton that could be used as a villain.

The cemetery is really cool with a big tomb, a grave that has a coffin in it, trees that you can hang little bats from, and all sorts of details kids will enjoy. My son loves that the skeleton can be inserted into the coffin, and with a press of a button the coffin pops out of the ground!

This is a great Scooby-Doo playset that we would definitely recommend to other parents and children!

This fun playset has a western-themed stagecoach with a couple of horses – and a Shaggy and Scooby driving it. Don’t worry, they are wearing their cowboy hats!

The villain of the set is a skeleton themed ghost-rider named “Dapper Jack.” His head spins around from villain to regular person when you catch him. There are a lot of other western themed accessories that come in this set – there are 70-pieces after all!

I think that any child that loves Scooby and loves western themed shows is going to love this toy!

6.) Playmobil Scooby-DOO! Adventure in The Witch’s Cauldron Playset – I don’t think you could have a bunch of Scooby-Doo themed playsets without having one based on a witch as the villain. I mean, that is the most famous of villains I can think of.

Luckily, we got the Playmobil Scooby-Doo Adventure in the Witch’s Cauldron Playset. This is a 38-piece set that comes with a Velma and Scooby figure, plus a witch figure!

Every witch has to have a big cauldron and this set includes one of those as well. And of course, there is a witch’s hat too – this set wouldn’t be complete without one of those.

The cool witch figure, big cauldron, and other accessories that are included make this a great Scooby Doo toy!

This is the first set in this Scooby Doo toy line that is going to be taking you for an underwater adventure! This 31-piece set comes with a Captain Cutler figure and a Fred figure decked out in diving gear – plus a Scooby figure with his surfboard.

This set also includes some treasure – which is obviously what the evil Captain Cutler is after!

This really is going to be a great addition to the Scooby-Doo toy collection from Playmobil and I know we are excited for it to be released!

But rather, it focuses on Shaggy and Scooby doing their favorite thing – eating! This playset comes with both a Shaggy and Scooby figure – plus a unique dining table, food cart, pizza boxes, and all sorts of food for them to snack on!

This is a nice set to get both a Shaggy and Scooby figure. A lot of these sets have Scooby and Fred, or Velma and Scooby – so getting both the main characters is a nice plus.

This inexpensive set is a great starter piece for any Scooby Doo Toy collection.

It is a 28-Piece set that includes a Scooby Figure and of course a black knight figure. This is a really cool looking figure dressed in armor that can be unmasked – and I know my children are really going to love the toy sword that comes with the knight.

There are also a lot of paintings with the story basically being Scooby investigating the paintings to solve the mystery. Overall, this is a great addition to the Scooby Doo collection and is going to bring a lot of enjoyment to children.

10.) Playmobil Scooby-DOO! Scooby & Shaggy with Ghost – If you think of the most basic concept of a Scooby-Doo episode, it is going to be Shaggy and Scooby running away from a ghost. That is the essence of the cartoon!

And that is exactly what the Playmobil Scooby-Doo Scooby & Shaggy With Ghost set captures! The description of this set is, well, just what the name implies – a Scooby figure, a Shaggy figure, and a ghost. Like we said, simple and right to the point of a true Scooby-Doo episode!

This is a 22-piece set, so there are some cool accessories like a flashlight that come with it, but it is the ghost that is really cool. The ghost costume is two pieces and can even be placed on Shaggy or Fred from a different set – although it doesn’t fit perfectly.

My children couldn’t get enough of playing with this set, and you can read about their adventures here: The Scooby, Shaggy, and Ghost set from Playmobil reviewed.

This is going to be a 46-piece set recommended for children ages 5 – 12; and is going to include a Scooby figure, Velma, and Witch Doctor. They are all going to have the Hawaiian/Island vibe and decorations going for them!

This set will also have its own ghost card just like all the other sets that can be used in the Mystery Machine or Mansion Playset as well – and the island themed decorations and accessories make this Scooby-Doo toy look great!

There are going to be a lot of children excited when this toy gets released! Especially those young Scooby-Doo fans!

Each of the blind bags in series 1 is going to be some type of villain. There are 12 different villains you can collect ranging from a witch doctor to a zombie, or even a snow monster. There are some really cool options to pick! These figures can also be unmasked – so the go from monster to human getting caught!

In these blind bags are also stickers and a little ghost card that can be collected.

Keep an eye out for series 2 – which is going to be the main characters from the show!

After seeing this great list of Playmobil Scooby-Doo toys, I think it is safe to say you can agree with us that they have some tremendous Scooby-Doo toy choices!

If you are looking for some more choices, I would encourage you to read this review we did:

That should help you find that perfect Scooby-Doo Toy if you haven’t found it already!

If you want to find some different toy options, check out this list of reviews we did:

These toy reviews are going to help you find some great toys for any child!