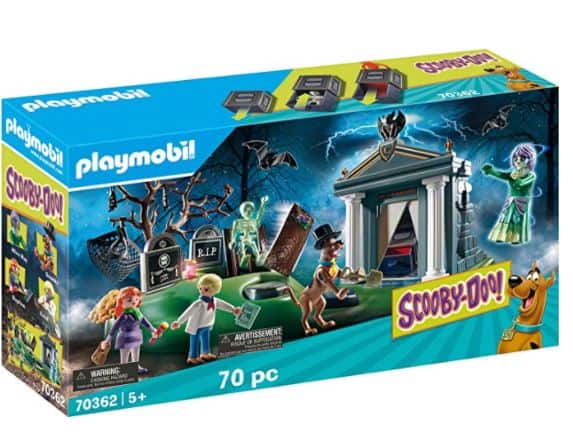 It was pretty exciting to see my oldest child go through a major Scooby-Doo phase where he wanted to watch all of the different Scooby-Doo shows that were out there! It really brought back a lot of nostalgia for dad.

One of the other really cool things to come out of this phase was us discovering how many awesome Scooby-Doo toys are out there – especially from Playmobil!

One of the great Scooby-Doo toys we ended up purchasing was the Playmobil Scooby-Doo Adventure in the Cemetery Playset! This toy ended up being very impressive, and we were amazed at just how much fun we had with it!

Check out the adventures we have experienced with this Playmobil Scooby-Doo Adventure in the Cemetery Playset in the review below!

This fun Scooby-Doo Cemetery Playset is rated for ages 5+ and is actually a 70-piece set. It comes with a Fred, Daphne, and Scooby-Doo figure – plus the entire cemetery set that you put together. There is also a villain in disguise and a really cool skeleton figure.

Building and playing with the cemetery set is where the fun really begins. You get to build a really cool crypt that has some entrances to it – there are some neat trees that you can hang bats off, but the skeleton in a coffin is the best part of this toy and the part my son loves the most.

There is a coffin that has a lid that opens up. The skeleton figure fits perfectly inside this coffin, and there is a grave you can put the coffin in. On the set is a button that you can push that has the coffin pop up – and all sorts of fun things can happen from there!

We paired this toy with the Scooby-Doo Mystery Machine Set and the Scooby-Doo, Shaggy, and Ghost Figure Set to maximize the enjoyment and to have multiple sets to play with!

These sets combined created a great Scooby-Doo Adventure world, and the cemetery set is a major part of the fun (and would-be fun all by itself as well).

Because this toy doesn’t make any sounds or do really annoying things, it is automatically going to rank well on our annoyance scale. It does take a few minutes to put all 70-pieces together – but this was one of the easiest toys I’ve ever built. That is a major positive.

Besides building it, your big annoyance is going to come from some of the pieces coming apart – such as your child asking for help with the popping skeleton coffin – and all of the little pieces getting lost in your carpet. 70-pieces, with some of them being very little, it tough for any child to keep track of, especially mine.

Because there are so many little pieces and a risk of losing those pieces, we are going to give it a 4 on the annoyance scale, but I wouldn’t let that discourage you from buying this awesome toy – your child will love it. And if they are way more organized then my children, your annoyance will probably be even lower!

This Scooby-Doo themed toy is not very dangerous – in fact, it is very safe. You only have two major things to worry about – your child throwing the action figures around the house, and the small pieces being choking hazards. It does have the standard not for children under the age of 3 warning because of the small parts – and it is a lot of small parts!

Because of the choking hazard we are going to give it a 3 out of 10 on the danger scale, but honestly, if you don’t have young children in the house it would be even lower than that.

This Scooby-Doo Cemetery Toy has brought a lot of fun to playtime – and it really starts with that cool skeleton and coffin combination! There are so many fun, imaginative things that can be done with this set, which is why it is a real winner in our book.

And I know they are sold separately, but if you pair this Scooby-Doo toy with some of the other options, your child is going to be thrilled at the adventures they can get in. We are going to give this one a Silver Star Rating – but I might upgrade this one to a Gold Star Rating depending on how long my child keeps it in their favorite toy rotation.

This Scooby-Doo Graveyard Toy is going to be a hit, and we gave you a couple of links to other Scooby-Doo toys we have reviewed, but if you want even more Scooby-Doo Toy options I would encourage you to check out this link: The Best Scooby-Doo Toys for 2021.

If you are interested in some of the other cool toy reviews we have done, check out this list:

Between these toys, I think you are going to find something you will really enjoy!