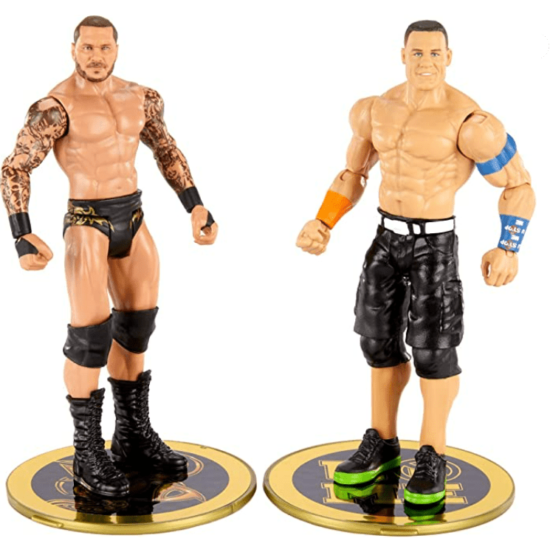 That is probably why my son was able to find it at a discounted rate, which is why he ended up buying it, even though he already had a John Cena Action figure from his John Cena vs. The Rock Championship Showdown Collection. The nice thing about WWE is that the John Cena figure in this set looks different than the one he already owns, which he was really happy about.

So, check out all the details you need to know in this WWE Randy Orton vs. John Cena Action Figure Set Review to see why this Championship Showdown Action Figure line is a great buy!

As you can tell by the name of this figure set, it includes two figures – a Randy Orton and John Cena action figure. The “Smackdown Showdown” title for these series two action figures is incredibly appropriate. These two WWE Superstars started their rivalry all the way back in 2007 – and had on and off again battles against each other all the way up to 2014! It only seems appropriate to create an action figure set commemorating this fantastic rivalry.

The two figures are 6-inches in size and designed to look just like Cena and Orton. Orton’s figure includes his very recognizable tattoos and black and gold ring attire. Cena’s figure includes his black cargo pants, arm bands, and stylish tennis shoe look. Both figures have 10 points of articulation, allowing them to perform a number of different moves in the ring against each other.

When they aren’t wrestling each other, both of these figures can be stored on the included stand plates. Randy Orton’s plate has “RKO” with his viper logo; with John Cena’s plate featuring a You Can’t See me Design. Both figures will easily lock into place on the stands, making for a pretty cool display when they aren’t in use.

There really isn’t much more to these wrestling action figures. They don’t do anything special like light up or make sounds – they are just two well designed action figures based on really popular WWE Superstars. I also like the fact that these Showdown Packs are cheaper than trying to buy two individual wrestling figures – giving you more toys to play with, and in this case giving you an opportunity to recreate one of the best WWE Rivalries.

I really have no complaints about this WWE John Cena vs. Randy Orton Action Figure Set. My son loves playing with both figures, and he really loves having them wrestle his other WWE Action Figures (we own the Bobby Lashley vs. King Booker & Drew McIntyre vs. Goldberg sets, plus the Ric Flair Superstars Figure and Kane Elite Legends Action Figure) in special events like his Royal Rumble. There are a bunch of different figures that have been released in the Showdown Series, so if you aren’t sure about John Cena vs. Randy Orton, check out this full list: A complete list of the WWE Championship Series Figure sets.

These figures are always going to work better with a ring, so if you haven’t bought one yet – we love the WWE Wrekkin’ Steel Cage option. Overall, we are going to give these figures a silver star rating and would have no problem recommending them to a WWE Fan!

A Few Other Links of Interest

If you are a WWE Wrestling fan, there are a few other reviews that we did that you might be interested in, including:

There are a lot of great WWE toys on the market today, so keep your eyes open and enjoy investigating some of those fun options!